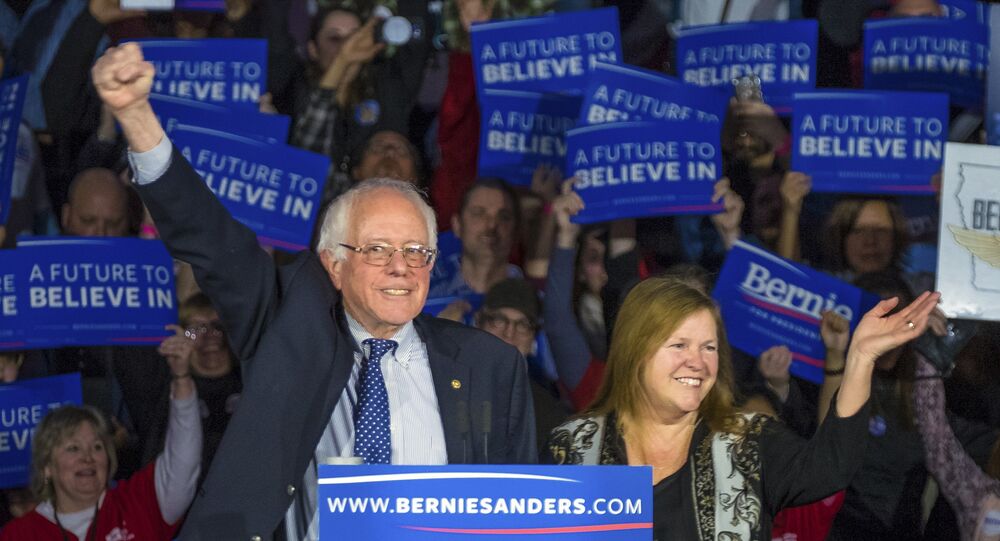 The Vermont Senator has not indicated plans to run as a third-party candidate, but a major national public opinion poll suggests that he might have a chance if he does.

A new poll released Friday shows 48% of those Americans want Bernie Sanders to continue his presidential bid, days after it became clear that he had lost the Democratic Party nomination, befuddling political pundits who have been calling for the insurgent Democratic challenger to drop out.

The poll, conducted by Morning Consult, suggests that 48% of Americans participating in the survey believe that the Vermont Senator should keep campaigning, whereas 36% believe he should step down and leave Hillary Clinton and Donald Trump to slug it out.

The findings are consistent with recent public approval polls showing Clinton and Trump as the two least-popular politicians since pollsters first began gauging public opinion in presidential contests. The two are viewed negatively, by 55% for Clinton, and by 56% for Trump, a rate lower than the mid-20th-century segregationist George Wallace.

The support for Senator Sanders to remain a presidential contestant crosses party lines, with 47% of Democrats, 48% of Republicans, and 52% of independents supporting the progressive.

The poll, conducted on Wednesday and Thursday, right after the Sander’s gut-wrenching loss in California, included a sample of 1,247 respondents nationwide, suggesting that the democratic socialist may fare better in a general election match-up than he did in the primaries.

Recent widespread public outcry for a third party alternative represents a stark departure from the Democratic Party’s efforts to quietly rush the Vermont Senator off the stage.

Yesterday, Sanders, a candidate who has received over 5 million individual contributions — a record — at an average of $27 per person, met with US President Obama and US Senate Minority Leader Harry Reid. Soon after the meeting several popular Democratic politicians, including Obama and progressive Democratic Massachusetts Senator Elizabeth Warren publicly endorsed Clinton.

While the political establishment and mainstream media outlets have calling Sanders a "fraud," a "sore loser," and a "joke," Americans seem reticent to "settle for Hillary," as a popular meme now suggests.

A major impediment standing in the way of the Vermont Senator’s chances are ballot access laws requiring individuals or political parties to start collecting signatures several months ago, with deadlines for submitting sponsors already having passed in many states.

That challenge could be overcome if Sanders accepts a recent invitation from Green Party frontrunner Jill Stein, who offered the Vermont Senator her position on the ballot, should he decide to contest what many suggest is a broken two-party system. The Green Party is eligible for ballot access in 40 states, and political analysts suspect Sanders could run an effective write-in campaign in the remaining contests.

The question of whether the Vermont progressive will consider running as a third-party candidate remains to be seen, but the poll indicates that if he decided to, he would be a viable candidate for the presidency.