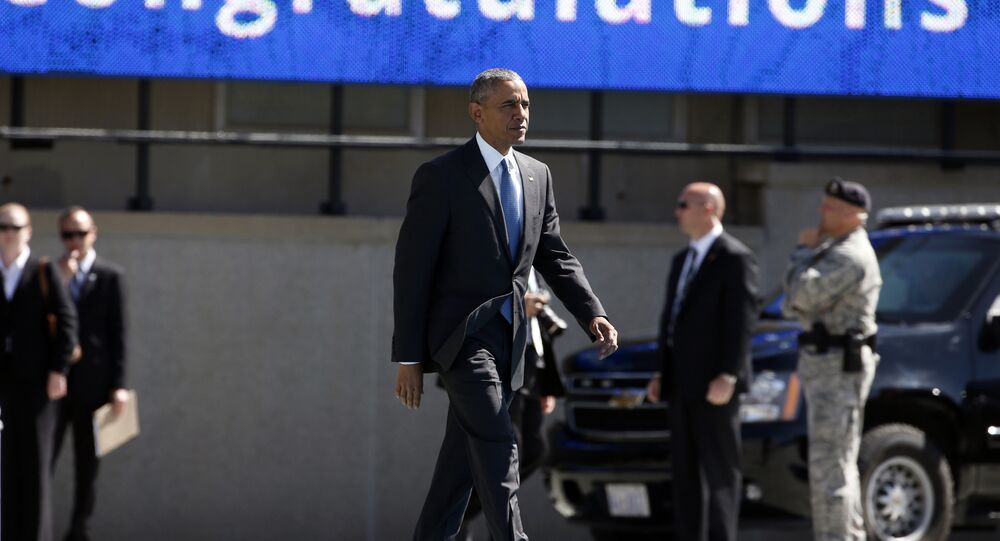 The Nobel Peace Prize recipient who campaigned on a message of peace turned out to be a next-gen model of George W. Bush.

On Thursday, President Obama used the final graduation speech of his presidency, before the 2016 Air Force Academy graduating class, to defend foreign policy expansionism under his administration, despite failures in Libya and Syria, along with a return to Cold War-style hostilities with the East.

"America cannot shirk the mantle of leadership," said Obama. "We cannot be isolationists. It is not possible in this globalized and interconnected war."

The commentary, viewed by mainstream punditry as an assault on Donald Trump’s calls to rethink NATO and have allies contribute more to the collective defense, comes after President Obama called for a $1 trillion military budget propelled by increases in military resources along Russia’s Eastern border and in the South China Sea.

Despite a public clamoring for a less hostile foreign policy and a retreat from economic globalism, the President told cadets that America must continue to nurture international alliances behind a robustly-funded military.

"In these uncertain times, it is tempting sometimes to pull back and try to wash our hands of conflicts that seem intractable, let other countries fend for themselves," Obama said. "But history teaches us, from Pearl Harbor to 9/11, that oceans alone cannot protect us."

Historically, apart from the two aforementioned attacks, the United States mainland, since the War of 1812, has not been invaded or faced a serious military threat requiring defensive action.

The President looked to recast foreign policy blunders that have cost several hundred thousand lives in the Middle East as teachable moments.

© REUTERS / Fabrizio Bensch/Files
Half of Germans Open to EU Exit, 2/3 for Ousting Merkel

Speaking on Libya he argued that the ouster of Muammar Ghadafi, which the administration previously claimed it did not overtly intend, despite Hillary Clinton’s ‘We came, we saw, he died’ mantra, was a critical mistake, not because it was an unprovoked attack, but rather because there was no planning for what would happen on "the day after."

That metaphorical day after saw a once-wealthy and diverse oil-producing nation dissolve into a failed state, becoming a staging ground and source of profit for violent Daesh extremists.

Similarly, the outgoing 44th President of the United States defended what Americans view as the controversial decision to attempt to remove Syrian President Bashar al-Assad, as the US had just done with Gaddafi, and had done a decade prior with Iraq’s Saddam Hussein. However, the President failed to address the destabilizing influence of threatening to invade a Syria mired in a civil war, or the administration’s continued bungling of the situation by arming pro-Daesh, anti-Assad forces.

President Barack Obama, who entered into the US presidency on a message of peace and anti-interventionist rhetoric, who was awarded the Nobel Peace Prize in the first days of his administration, spoke about a foreign policy eight years later that is indistinguishable from the younger-Bush era, with the one exception, rather than capturing and torturing people, America executes them through the use of targeted drone strikes.

On Thursday, Loud & Clear’s Brian Becker sat down with political analyst and author Eugene Puryear to talk about the hopeful Obama foreign policy of eight years ago versus the reality of today.

​Did Obama’s speech to Air Force Grads sound like it came from a Nobel Prize Winner?

"No, it did not sound like Nobel Peace Prize talk and it just goes to show how it was one of the most misplaced awards ever given, with the most inappropriate Peace Prize going to Henry Kissinger, the author of genocidal bombing campaigns and mass murdering of all types," said Puryear.

Apart from comparing the Obama, once the candidate of "hope and change," to the Obama of Hillary Clinton’s foreign policy mentor, Puryear pointed out the audacity of the President’s defense for his administration’s consistent military failures.

"He said that we failed to prepare for what would happen the day after in Libya which was a pretty unbelievable statement," said the analyst. "We went into this country, we bombed and invaded it, we knew we were going to overthrow the same government that it had for 40 years, and we didn’t make one single plan for what was going to happen after President Obama, who ran as an anti-war candidate was extremely critical of the Bush administration’s role in Iraq for exactly the same thing."

Puryear also criticized President Obama’s commentary on avoiding isolationism, arguing that the use of the term is in bad faith. "The Democrats and Republicans use that term as a political tool to banish anyone who argues for drawing back the massive US military-industrial complex even slightly."

Is there really any difference between Obama and Bush, Cheney, and Rumsfeld?

"It is important to note that he did not morph. President Obama’s entire critique of Iraq was that it was a 'dumb war,' and the problem with the Bush administration wasn’t necessarily that it went to war, it was just the way they went to war was incorrect, or they went to the wrong country," suggested Puryear.

The activist suggested that President Obama was clear, from day one, that he supported military interventionism, but that it "was obscured by the euphoria of the moment." Puryear said that, if you read his speeches or looked at his website, Obama’s policies have remained consistent.

However, Puryear notes that, as a candidate, President Obama fooled the anti-war community into supporting him, calling it a "dog whistle effect."

"He used a lot of anti-war rhetoric with a phrase here or a phrase there and I think that fifty years from now when the history of President Obama’s administration is written we will realize that he was the US leader most skilled since John F. Kennedy at using the language of peace to mask a highly imperialistic war-like agenda."