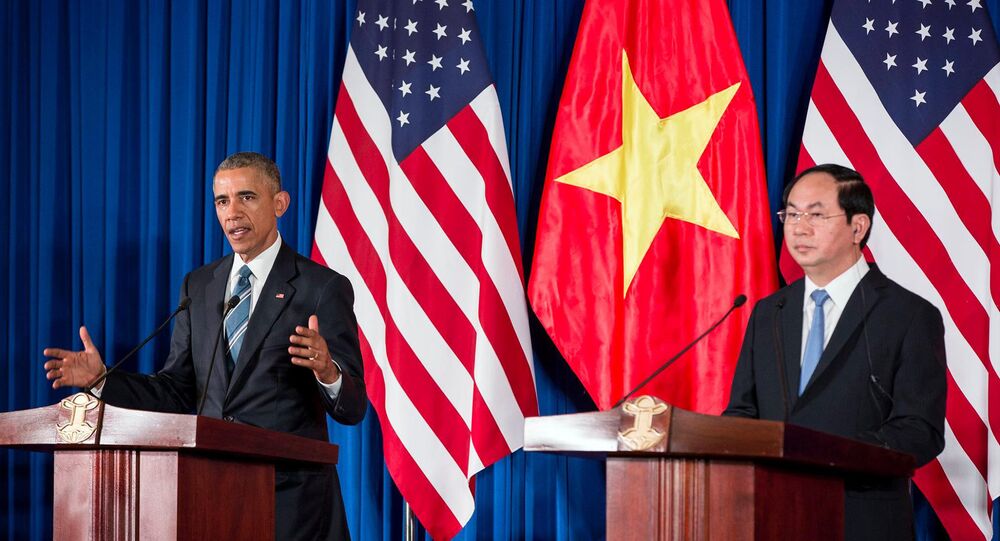 In a bid to counter China’s growing influence in the region, President Obama revokes a five-decade trade embargo with Hanoi, while the Vietnamese government seeks to back-engineer American weapons technology for their own purposes.

On Monday, US President Barack Obama embarked on a three-day visit to Hanoi, the third visit by an American leader since the two countries restored diplomatic ties in 1995, to announce the cessation of a five-decade embargo and work toward a full normalization of relations with a once bitter rival.

The visit has been billed by Western media and security analysts as a bid by Washington to constrain the growing influence of Beijing and to beat back Chinese advances in contested waters of the South China Sea. Others have proposed that the development has more to do with continuing the healing process, four decades after an unprovoked invasion.

Many questioned whether the wounds of war could ever be overlooked, following a gruesome conflict that left some 1.35 million Vietnamese dead, including nearly 700,000 civilians. In the first day of the summit, however, the two former belligerents agreed on the sale of 100 Boeing commercial jets to Vietnam, leaving officials in China stumbling to determine just how susceptible to Western charms their long-time ally is.

Vietnam’s relationship with China, a primary trade partner, continues to unravel in the wake of increasingly hostile disputes in the South China Sea, seen by some as a longterm echo of Vietnam’s ouster of the Chinese-backed Khmer Rouge in Cambodia in 1978, which set off a brief border conflict between Hanoi and Beijing.

On Tuesday, Loud & Clear’s Brian Becker sat down with Dr. Alexander Vuving, security analyst and professor at the Asia-Pacific Center for Security Studies, to discuss President Obama’s announcement that the US will end a five-decade arms embargo against Vietnam and whether the development may lead to conflict in Asia.

​Will Vietnam become a primary US weapons client now that the arms embargo has been lifted?

"I think the lifting of the full US embargo on weapons is rather about building and creating trust with Vietnam rather than weapons commerce," said Dr. Vuving. "The Vietnamese are looking for US weapons, but that is for the long-term. In the short-term, the Vietnamese will be studying what types of weapons they need from the United States. They also have other providers of weapons other than the United States that tend to be less expensive than American weapons."

Will Vietnam seek US systems to upgrade their surveillance of China?

"Yes, I think Vietnam may be considering buying some early warning aircraft, radar systems, basically weapons that would enhance their ability to monitor and control the South China Sea," said the security analyst. "In the surveillance market they can still look to other sources as well, including Israel and Russia, so I doubt Vietnam will race quickly into the US weapons market."

The professor opined that the Vietnamese government aims to diversify their weapons procurement, making it unlikely that the regime will instantly become a client state to the United States.

"The last couple of years, Vietnam reached out to non-traditional sources, including France, Sweden, Canada, and South Korea, to buy weapons, so now, with the full lifting of the US arms embargo, the Vietnamese will look to the US as one of many sources for weapons," said Dr. Vuving.

Is the US attempting to create an anti-Chinese bloc to encircle Beijing?

"I don’t see the US policy as trying to create such a bloc," said the security expert. "I think the US is very prudent about relationships with China and they don’t want to create the feeling in China that everybody is up against them, and I think the same is true of the Vietnamese government being reticent to provoke China."

The professor explained that the US-Vietnam reconciliation process has more to do with the history between the two countries than with current mutual interests the two countries have in regard to China’s regional expansion.

What’s the view of Vietnam’s leadership regarding the balance between Washington and Beijing?

"Many Vietnamese officials are very leery about the Chinese expansion in the South China Sea and there is some concern about Beijing’s intentions," said the professor. "Vietnamese officials disagree about the preferred approach to deal with the Chinese expansion, with some wanting to expand relations with the United States but with others who are more suspicious of Western influences in Vietnam and desiring a softer line with China."

Will Vietnam purchase US weapons to steal the technology – so-called “technology transfers”?

"Yes, Vietnam hopes to develop its own indigenous technology and they may look to absorb some of the latest technology from US weapons systems," noted the professor. However, he remarked that, unlike more developed countries like China, Vietnam will not be able to absorb very high-level technology. "The kind of technology that Vietnam will be able to steal is much lower in the advancement scale."