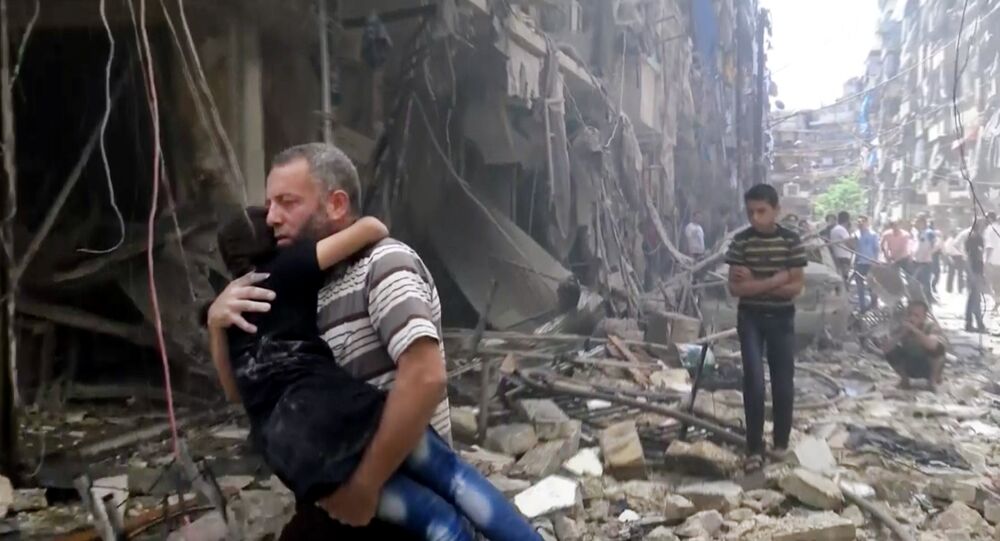 The five-year Syrian civil war, the world’s largest ongoing humanitarian crisis according to the UN, seems unlikely to end anytime soon, with Washington funneling heavy weapons into Syria that end up in the hands of extremists and as more Daesh recruits arrive from Turkey.

On Monday, Russia and the United States announced that they were “re-doubling” peace efforts in Syria, with negotiations ongoing to revive the struggling ceasefire agreement implemented in February.

The joint effort to bring about a solution to the five-year Syrian civil war has been repeatedly marred by mutual mistrust, disagreements, and curious allegiances. The White House continues in its thinly-veiled attempts to oust the regime of Bashar al-Assad, despite stating that its primary mission is against Daesh.

In its effort to oust the Assad regime, the US government continues to approve military aid to the Free Syrian Army and other ‘moderate’ opposition rebel groups. This military aid has been shown to routinely fall into the hands of Daesh and al-Nusra Front, the Syrian affiliate of al-Qaeda, given the hazy lines between the extremist and rebel organizations who, while opposing each other, all oppose the Assad government.

At the same time, the Russian government seeks to counter the growing emergence of al-Nusra Front, as well as Daesh, in Aleppo, in the face of repeated accusations from the US and its allies Turkey and Saudi Arabia that the Russians are taking aim at the moderate rebels rather than the extremists. In so doing, the Russian government deployed troops in support of the Syrian-Arab army against Daesh, to prevent the country from descending into a failed state.

The complex web that stands in the way of a comprehensive peace arrangement starts with the hazy lines dividing Daesh and al-Nusra on one side, and the very few fighters with legitimate opposition forces on the other.

Daesh and al-Nusra continue to receive funding from US allies Turkey and Saudi Arabia, and the Turkish government has been repeatedly implicated in arms and oil trade with Daesh. Daesh fighters often retreat to the Turkish border and Daesh re-enforcements scramble back into Syria from Turkey daily.

Finally, one of the primary forces in the fight against Daesh, the Kurds, continue to be excluded from the peace talks at the behest of the Turkish government, who views the group as a mortal enemy.

Under this complicated web the US and Russian governments continue to work together to overcome disagreements and bring peace to Syria.

There has been limited success. US Secretary of State John Kerry on Tuesday credited the Russian government with saving tens of thousands of lives and ensuring that a million people received aid by forging forward with its longshot ceasefire efforts in February.

With substantial humanitarian gains but mounting challenges ahead, Loud & Clear’s Brian Becker sat down with Middle East policy analyst Zafar Bangash of the Institute of Contemporary Islamic Thought to discuss the renewed joint peace efforts in Syria and what chance they have to succeed.

​Will the ceasefire in Aleppo hold?

"The situation in Aleppo is quite uncertain because there are a number of groups particularly ISIS, al-Nusra Front, etc. that are not included in the ceasefire agreement," explained Bangash, "The Syrian security forces control about 80% of the territory around Aleppo while the northeast part of the city is under the ISIS and al-Nusra Front groups."

Are there actually ‘moderate’ rebel groups in Syria?

"There is no such animal as the moderate rebel, these ‘moderate’ rebels exist in America’s imagination, and their definition is that anybody who is not part of ISIS and al-Nusra is a moderate," said Bangash. "There are a whole lot of groups that fight among themselves, as well as against Syrian forces and their allies, but the predominant groups are ISIS and al-Nusra front."

How can a ceasefire hold when al-Nusra and Daesh control parts of Aleppo?

Bangash suggested that the potential for a temporary peace remains, but that it cannot persist as long as the US continues to insist upon the ouster of Assad, and Daesh militants continue to flood across the Turkish border into Syria.

Another problem, according to Bangash, is the "United States has said that it will supply heavier weapons to the so-called moderate rebels and the US has been supplying these weapons to moderate rebels but they end up in the hands of Daesh and al-Nusra Front fighters."