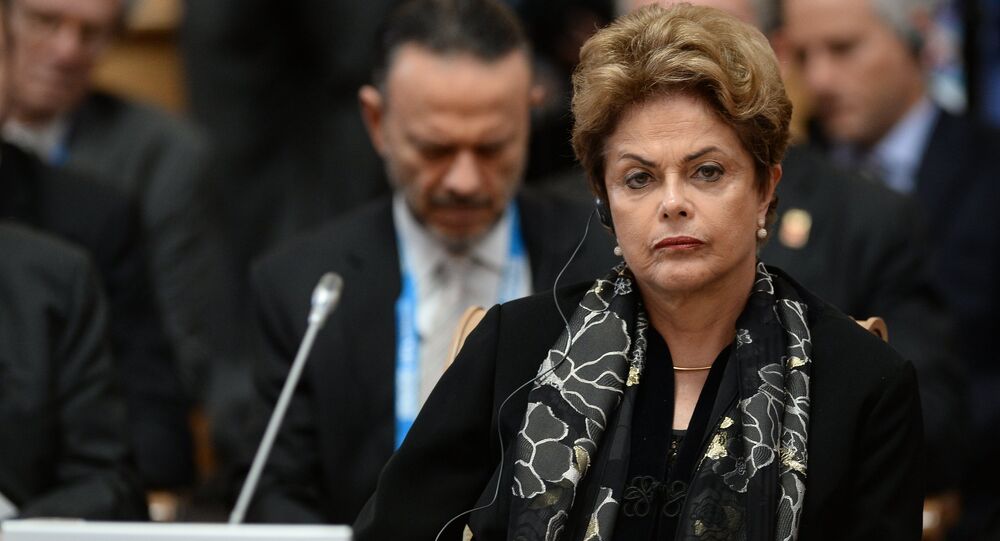 One day after the Brazilian people breathed a sigh of relief after the lower house impeachment vote was annulled, that decision was unheroically walked back, creating what may become a gory constitutional crisis.

https://www.spreaker.com/user/radiosputnik/brazil-impeachment-annulled-will-dilma-s_1
On Monday, Brazilian President Dilma Rousseff saw the effort to oust her in a legal coup suddenly all but called off, when acting speaker of Brazil’s lower house Waldir Maranhao moved to annul the April 17 impeachment vote, citing procedural improprieties.
© REUTERS / farsnews.com
‘Israel Must Be Wiped Out’: Iran Tests Missile Capable of Reaching Tel Aviv

But on Tuesday the mercurial Brazilian impeachment circus stunned the world again when Maranhao renounced his own move to annul the April 17 vote, increasing the likelihood that Rousseff will face a 180-day suspension from office when the country’s Senate votes on Wednesday, paving the way for the unpopular conservative, Vice President Michel Temer, to assume the presidency.

Brazilians fear that Temer and his unelected Brazilian Democratic Movement Party will move quickly to privatize the country’s natural resources and institute austerity measures in Latin America’s most populous country.

The Senate had announced on Monday that, notwithstanding the move to annul the lower house vote for impeachment, the body would still take up the impeachment vote, arguing that authority transferred to the upper chamber after the April 17 vote was certified by then-lower house leader Eduardo Cunha. Cunha was suspended from office last Friday by the Brazilian Supreme Court for corruption charges, and was replaced by Maranhao.

Cunha, the primary architect Rousseff impeachment, is viewed by Brazilians as the country’s most corrupt politician, having been featured in the infamous Panama Papers and linked to 23 separate Swiss shell accounts that he uses to launder kickback money. It has been alleged that Cunha bribed his lower house colleagues to vote in favor of impeachment.

Speaking on Radio Sputnik's Loud & Clear show on Monday, Brazilian analyst Victor Fraga told Brian Becker that the decision to annul the April 17 vote meant that Wednesday’s vote "would not have any legal value because the first part of the impeachment process has been invalidated." Yet it remained unclear whether Maranhao had legal jurisdiction to annul the vote led by his predecessor.

Now, following a decision to retract the annulment, another question persists as to whether an annulment of a vote can be retracted if the initial annulment had any effect in the first place.

Rousseff Takes the Impeachment Battle to the Supreme Court

On Tuesday, Brazil’s top lawyer, Attorney General Eduardo Cardozo, asked the Supreme Court to annul impeachment proceedings, arguing that they were politically motivated and had no legal basis.

The Supreme Court seems to be the only authority standing between a coup and an eruption by disenfranchised Brazilian voters. Local reports indicate that Rousseff’s opponents have more than the 41 votes needed to initiate a full impeachment trial, thereby suspending the leader for 180 days, and they are confident they can gather a two-thirds vote, or 54 of the 81 senators, necessary to oust Rousseff and the Workers Party.

With the growing prospect that the impeachment process will take a step forward on Wednesday, Workers Party supporters took to the streets, blocking traffic in Sao Paolo, burning tires, and calling for a national strike to resist the coup.

The Supreme Court may have grounds to step in and annul the impeachment against Rousseff on the basis of corruption, the same procedural irregularities that lower house leader Maranhao noted yesterday. The top court can also annul the vote if they find such a decision cannot be retracted.

How the Coup Began

The precursor to the impeachment proceedings against Rousseff was the “Car Wash” corruption investigation into Brazil’s Workers Party, the state-owned oil behemoth PetroBras, and construction companies that participated in a kickback scheme. The dragnet investigation first roped in Workers Party founder and former President Luiz Inacio Lula da Silva. Rousseff stepped in to shield the popular Lula da Silva from imprisonment by appointing him as her chief of staff.

The Car Wash investigation revealed that Rousseff intentionally misrepresented economic data during her reelection bid, shifting money between government accounts to mask the fiction. Although not a criminal act, it is on these grounds that Rousseff’s opponents sought impeachment. Brazilian analyst Fraga told Radio Sputnik that "what she is accused of has been widely practiced by all governors and presidents of Brazil."

The vote on Wednesday appears all but certain to result in the Rouseff’s suspension, absent intervention by the country’s Supreme Court. The process has been marred by NSA spooks, rampant corruption, and procedural irregularities that are seen to anger the Brazilian people.

It is worth asking whether Rousseff accepts the impeachment coup, or opposes it by declaring a state of emergency. Fraga states, "the country is literally divided in two, friendships and families have been divided with people literally on each side. What hasn’t happened yet is social convulsion – there hasn’t been violence in the streets."

Absent heroic actions by the Brazilian Supreme Court, the people of Latin America’s most populated country could soon have an unelected government appointed by a kangaroo court, or installed by force, depending on how rowdy they decide to get. All of this political drama contributes to the overwhelming confusion of the Olympics, which arrives in only 3 months.