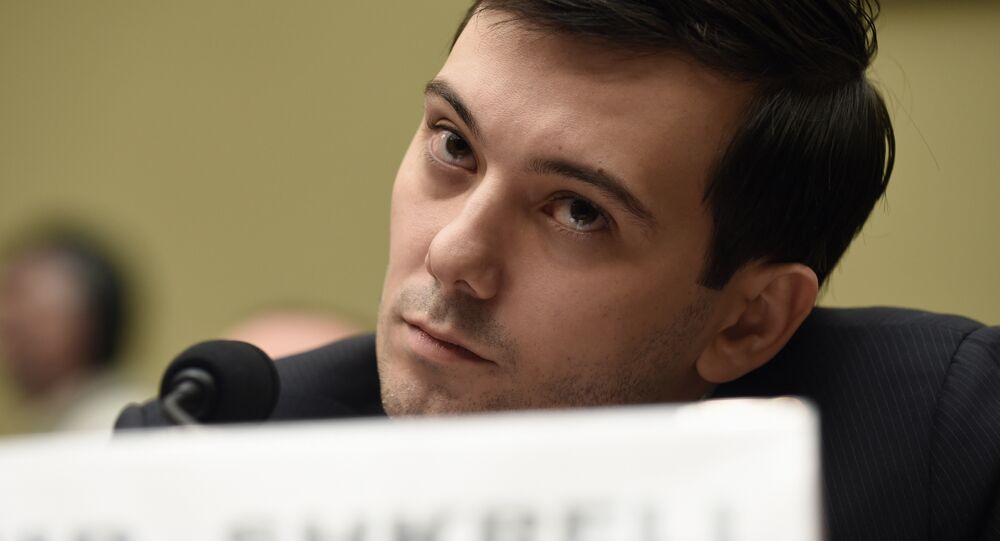 Martin Shkreli, popularly referred to as “Pharma Bro,” sat silently wearing a smug smirk on his face during a Congressional Committee hearing on drug price gouging, before causing outrage online by tweeting that the representatives are imbeciles.

© AP Photo / Craig Ruttle
‘Pharma Bro’ Takedown: FBI Slaps Fraud Charges on ‘Most Hated Man in America’
Shkreli’s notoriety began during his tenure as CEO of Turing Pharmaceuticals, after he raised the price of life-saving drug Daraprim by 5,000%. He currently faces unrelated federal charges for securities fraud, and has pleaded not guilty.

At the House hearing on Thursday, lawmakers took turns lecturing the greedy, and some say borderline insane, millionaire. Shkreli smirked throughout the process, occasionally responding with intense levels of snark.

"Drug company executives are lining their pockets at the expense of some of the most vulnerable families in our nation," Representative Elijah Cummings said. "It's not funny, Mr. Shkreli. People are dying and they're getting sicker and sicker."

"People in my district are not on the Forbes billionaire list — they can’t buy Wu Tang Clan albums for $2 million," Cummings continued, referring to the revered New York hip-hop group’s one-off CD auction. "Like many Americans they struggle every single month to pay for the increasing cost of housing, education and health care. They live from paycheck to paycheck and sometimes from no check to no check."

“What do you say to that single pregnant woman who might have AIDS, no income and she needs Daraprim in order to survive,” Republican Chairman Jason Chaffetz asked, before calling Shkreli’s actions “despicable.”

Shkreli then invoked his Fifth Amendment right against self incrimination, to which Representative Trey Gowdy informed him that he could choose to answer some of the questions and not others.

“I intend to follow the advice of my counsel, not yours,” Shkreli responded.

Less than hour after his arrival at the Capitol, Shkreli was dismissed from the hearing.  His attorney attempted damage control by telling reporters that his client is “misunderstood,” “nervous,” and did not intend to show disrespect to the members of Congress. The lawyer’s excuses were quickly laid bare as lies when the disgraced businessman tweeted that he considered the lawmakers to be “imbeciles.”

His name quickly rose to the top of Twitter’s trending topics once again, as people lashed out against one of many faces of pharmaceutical greed.

Presidential candidate Bernie Sanders weighed in, reminding people that while one man’s greed is on display, the skyrocketing cost of drug prices is a serious struggle for many across the nation.