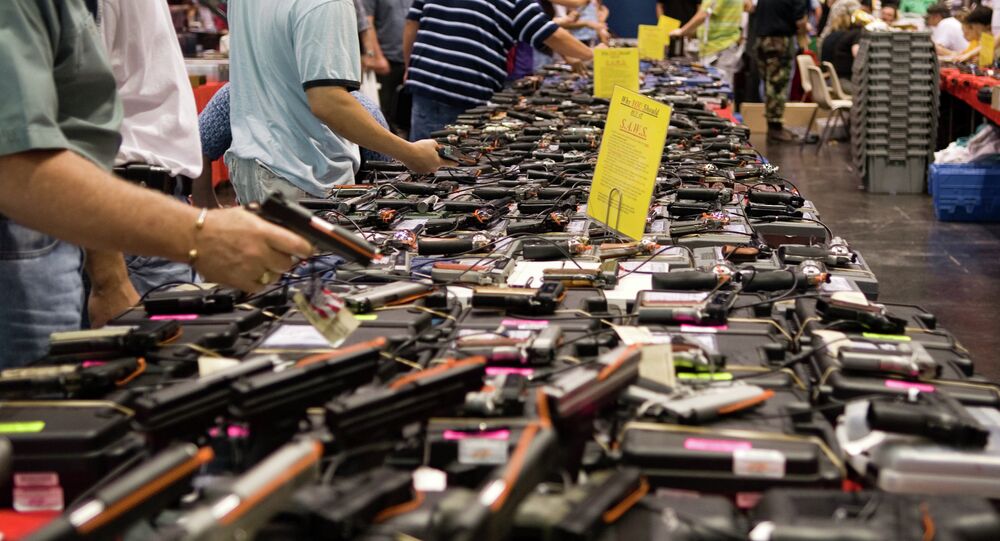 US President Obama is expected to use his executive powers on Monday to increase regulations for the purchase of firearms, and many have flocked to gun shows this weekend, unreasonably fearing that it may be their last chance to buy a firearm.

Tuscon, a city in the state of Arizona, saw its first annual gun show packed this weekend. A similar event in Chantilly, Virginia, as well as other sections of the country reveal that a fear of gun control has set in.

​“Obama is the best gun salesman in the world,” weapon dealer Robert Starer told WUSA in Chantilly. “People are scared to death that they’re not going to be able to protect themselves.”

At another event in Grand Forks, North Dakota, vendor Alice Strand said any talk of gun control by the government drives business for vendors.

"The more we hear about gun control, the more we sell," she told the Grand Forks Herald.

​The fear of losing the ability to easily purchase a gun to protect oneself due to a fear of terrorism points to the out-of-control spiral of gun culture in America.

“I have never seen so many people in there, you can barely even look at a gun,” Alex Aszelay, who was visiting the Crossroads of the West Gun Show in Tucson, told Tucson News Now.

The president is expected to meet with Attorney General Loretta E. Lynch to finalize a series of new gun control measures on Monday. Among them, reports suggest, may be the requirement for unlicensed gun dealers to obtain licenses and conduct background checks on potential buyers. Enactment of the proposal would close the so-called “gun show loophole” by targeting unlicensed dealers who frequently sell online or rent tables at gun shows, but do not have a regular brick-and-mortar storefront.

​Many weapon-owners are concerned that new regulations will limit or, at least, increase the amount of time required to make a gun purchase.

“I brought a.22 to shoot squirrel with and it took me about three hours to buy it,” Dick George complained to WUSA in Chantilly. "It’s just irritating, it really is.”

Obama’s intentions regarding common-sense weapon legislation in the United States have naturally led to criticism by Republican candidates.

“The president has a pattern of taking away rights of citizens,” candidate and former Florida Gov. Jeb Bush declared on “Fox News Sunday.”

It’s a sentiment many gun show attendees agree with.

“Criminals will always get guns, law abiding citizens are being deprived of that opportunity,” Tony Kaprowski told Tucson News Now.

Ironically, many last-minute gun buyers do not realize that the new measures would not affect them. Bill Braun, manager of the Grand Forks gun-sale swap meet said he's not worried because licensed gun vendors are permitted to sell there.

"It doesn't bother our people because they're all real registered gun dealers," he told the Herald.

Danger Within: Americans More Concerned Over Gun Violence Than Terrorism

Levels of Gun Violence in US Unlike Those of Any Other Country, Period

How Contagious is Gun Violence?