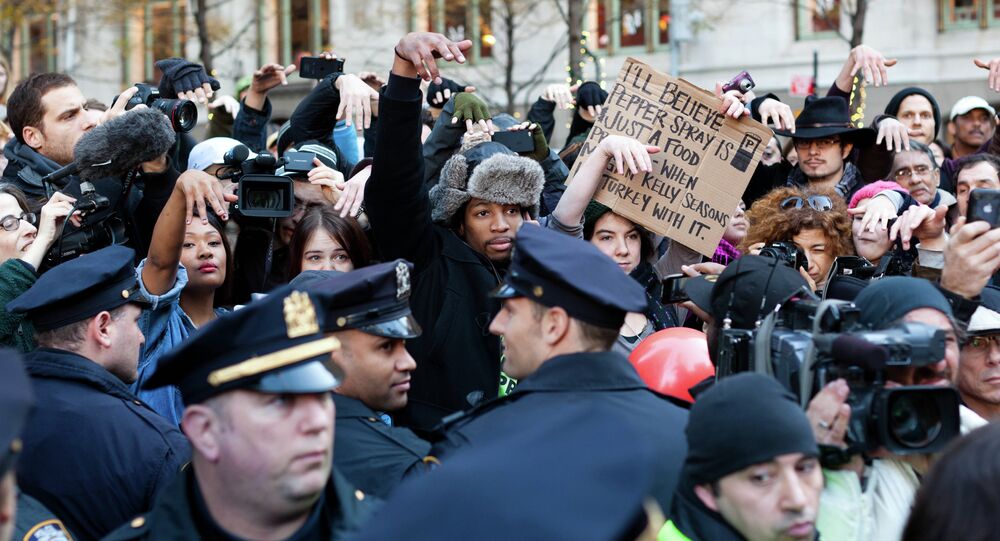 On September 17, 2011, a group of activists descended on a New York City park to declare war on corruption in the US political system. Today, 2016 presidential hopeful Bernie Sanders is closing the gap with rival Hillary Clinton, once thought a shoo-in for the Democratic nomination, and he largely has Occupy Wall Street to thank for it.

They came from all races, creeds, religions, ethnicities, classes and political backgrounds with a unified message: that the unfair distribution of wealth, along with the 2010 Citizens United Supreme Court decision that saw corporations as people who can donate unlimited riches of campaign cash, together as the most corrupting force jeopardizing America’s political system and the security of US citizens.

Over the coming days and weeks, heeding the calls of decentralized Anonymous activists organizing online, they came to Zuccotti Park in New York City's Financial District and pitched tents. They helped 2000 other Occupy encampments to organize in the town squares of other cities in other states, which then spread to countries on all seven continents, often as movements continuing the social upheaval that the Arab Spring and Indignados protests brought across Europe. They had a common unifying message, bringing together income inequality and capitalist exploitation, environmental degradation and the human toll of America’s worldwide military adventurism. The people, it turned out, were sick and tired of bailouts to banks backing the military-industrial-prison complex rather than ordinary people. The movement, and the year itself, was radically transformative for the world round.

Bernie Sanders’ campaign for president has become the end result of those thousands of man-years of activism from Occupy Wall Street. Sanders listened to what started as a genuine grassroots movement of citizens’ demands to transform their country, and the radical idea that a politician should listen to the people’s call for change seems to be paying off for him, as he now leads Clinton in several key polls. His success, along with Donald Trump’s for the GOP, is driving a schism deep into the foundation of the old guards of US political parties.

Sanders has always been seen as an outsider to the beltway political establishment, a fact that made his and Occupy’s ideals complementary. The eccentric independent senator from Vermont, a self-described democratic socialist, has always prided himself as someone who doesn’t need special interest cash to fund his campaigning. Most of the activists who started Occupy either don’t have the money to donate, or choose not to participate in a bankrupt system of legalized bribery as the form of protest.

The Washington political machine is run by big-moneyed interests backing ideas on behalf of industry. Occupy sought and successfully jammed the system, fundamentally changing the conversation. This transformation would not have been possible without the advent of social media, catalyzed by the Arab Spring beforehand, specifically by a young Tunisian fruit vendor named Mohamed Bouazizi who self-immolated in protest. Social media allowed for social organizing in ways that had never been possible before, creating uprising after uprising, some to disastrous consequences.

The capital of hundreds of thousands of worldwide interconnections made via Occupy Wall Street’s coordinated campaigns has been leveraged successfully by the Sanders campaign. A number of Occupy organizers — Priscilla Grim, Charles Lenchner, Brett Banditelli, and Winnie Wong, to name a few — continue to use Occupy Wall Street to do organizing and promoting for Sanders. Many social media accounts, now promoting #BlackLivesMatter protests under the flag of Occupy Wall Street, also evangelize Sanders’ record, but catch flak from activists who complain their owners care only about putting thousands of people on the street in New York City at any given time, but avoid the financial firms that they once targeted. This doesn’t sit well with those who see the movement’s resources being reappropriated for a political system in which the main demand that Occupy sought — a Constitutional Amendment to get money out of politics — is still far from being achieved.

Regardless of infighting within the Occupy movement, or what appears to be left of it, what is clear is that Sanders has been the only 2016 US presidential candidate to prove he is not allergic to social media; in fact, Sanders has been the only one to use it competently enough to be able to drive a policy-based discourse. While the Republican presidential nomination contest has devolved into a destructively entropic exchange of embarrassing one-uppers as more than a dozen hopefuls try to prove their conservative ideological credentials, the Sanders campaign’s social media symbiosis with the Occupy movement has allowed the Vermont senator and his supporters to stay grounded in problems that actually affect those in the real world.

From this perspective, the upper hand in the 2016 election right now goes to Sanders, and he has the architecture of the Occupy Wall Street social media revolution in large part to thank for it.