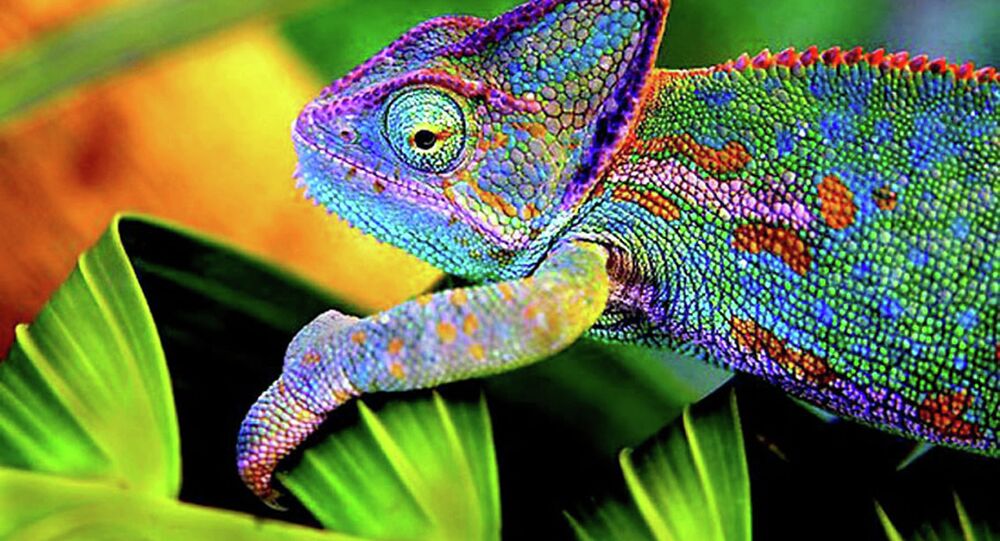 Chemical engineers at Stanford University have created a color changing, pressure-sensitive elastic material that mimics the skin of reptiles. So-called “e-skin,” dubbed an “electrochromic” fabric, changes its color and overall appearance with touch and surrounding conditions.

The possibilities for application in wearables, prosthetics and robotics seem nearly endless. While there have been a number of notable breakthroughs in color changing, touch-sensitive “smart-fabrics,” e-skin is the first to have the property of elasticity to simulate actual skin.

“We show an all-solution processed chameleon-inspired stretchable electronic skin in which the e-skin color can easily be controlled through varying the applied pressure along with the applied pressure duration,” Ho-Hsiu Chou of Stanford University, first author of the study, said. “As such, the e-skin’s color change can also in turn be utilized to distinguish the pressure applied.”

A stretchable microstructured polymer that modifies its voltage upon applied pressure, and a stretchable electrochromic polymer that can change colors depending on the voltage, the e-skin mimics the natural electricity of organic skin’s nervous pathways.

The Stanford team’s demonstration attached a pressure sensitive polymer to function as the paw of a Teddy bear, and connected it to an electrochromic polymer on the bear’s abdomen. The electrochromic polymer appears red first, but changes to blue-gray after a weak handshake of 50 kilopascals (kPa). A stronger handshake at 200 kPa turned the electrochromic polymer pale blue. Any measurement of force could be electrochemically programmed to produce a certain color on the spectrum upon touch. A multiple-step process that starts with the touch causes the polymer to slightly change its chemical structure and thus emit color at different wavelengths, and reverts back again upon release of pressure.

While the first-generation electrochromic polymer can only switch between shades of red and blue, researchers expect they will soon be able to create polymers that can be programmed to exhibit all visible colors. The applications then could have no end.

“The e-skin can potentially be integrated into the things that we wear and carry, i.e. clothes, smart phones, smart watches, and any other kind of wearable devices,” Chou said. “By integrating with this color-changeable e-skin, you can imagine that all the colors can be integrated into one device, and the user can change it interactively for decoration or to express emotion.

"Because the e-skin's color change can also be in turn utilized to distinguish and quantify the magnitude of pressure we applied, the other potential application is that we can integrate the system into any surface where we want to know the magnitude of pressure applied on it. Also, the e-skin can provide the camouflage function for prosthetics and smart robots. In addition, the stretchable system allows it to attach on curvilinear or dynamic surfaces well, while conventional rigid devices cannot. This advantage can reduce the interface between the device and human body."

While the e-skin has potential to revolutionize markets for consumer use, researchers note that the material used to make the devices contains carbon nanotubes. Nanotechnology has raised many safety concerns over toxicity, as the nanotubes mimic shapes associated with asbestos microfibers. In this particular case, the carbon nanotubes have been scaled down to be small enough to prevent damage to DNA and cause inflammation of organic material, as opposed to earlier, larger nanotubes.

With e-skin as a basis for future skin replacement, it is only a matter of time before tweaks in the technology could radically alter the human experience. Though we may be some time off from biohacking our way into becoming Vitamin D-soaking lizard people who absorb our own solar energy, more immediate applications in medicine such as artificial skin grafts could immensely help victims of severe lacerations, burns and disease.