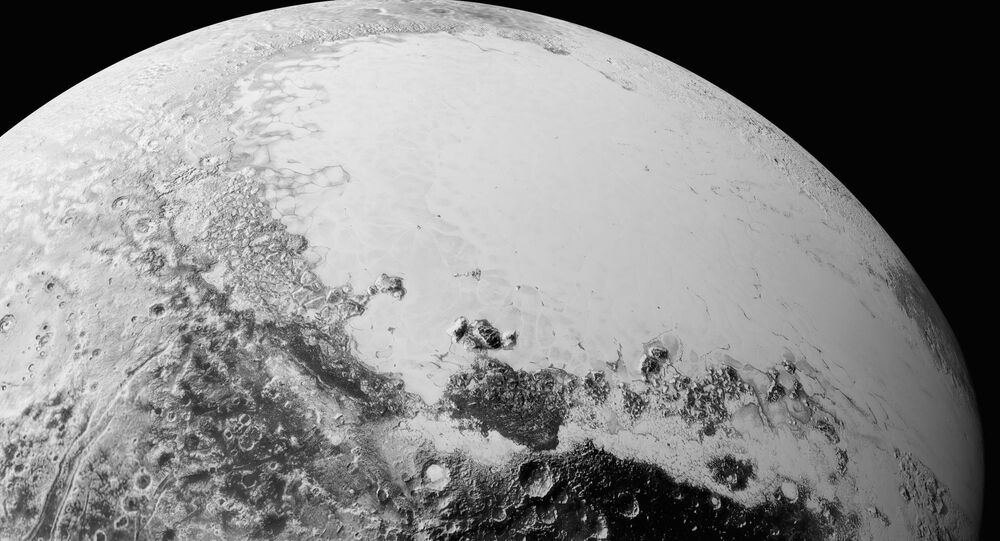 New landscape images of the surfaces of Pluto, moon Charon and the dwarf planet’s other satellites from NASA’s New Horizons probe are dazzling those of us back on Earth.

“If an artist had painted this Pluto before our flyby, I probably would have called it over the top — but that’s what is actually there,” said Alan Stern, the New Horizons principal investigator at the Southwest Research Institute. “Pluto is showing us a diversity of landforms and complexity of processes that rival anything we’ve seen in the solar system.”

The New Horizons probe began its download of data from the flyby last weekend, at a maddeningly slow speed that will take an entire year to complete. NASA scientists believe that the images point to features such as dunes, nitrogen ice flows oozing outward from mountain ranges, and topography such as valleys carved from glacial movements.

“The randomly jumbled mountains might be huge blocks of hard water ice floating within a vast, denser, softer deposit of frozen nitrogen within the region informally named Sputnik Planum,” said Jeff More, leader of the New Horizons Geology, Geophysics and Imaging team at NASA’s Ames Research Center. Sputnik Planum is the famous heart-shaped feature shown during the initial approach to the distant world, not to be confused with the news network whose site you are currently reading.

The new images show a stark contrast between a presumably older heavily cratered area as it borders the ice covered Sputnik Planum. Scientists did not expect to see features resembling sand dunes on the Plutonian surface.

“Seeing Dunes on Pluto — if that is what they are — would be completely wild because Pluto’s atmosphere today is so thin,” said William B. McKinnon, GGI deputy lead from Washington University in Saint Louis. “Either Pluto had a thicker atmosphere in the past, or some process we haven’t figured out is at work, it’s a head-scratcher.”

Initial atmospheric observations of the images are showing that the haze that envelops the planet has many layers, causing a soft illumination of nightside features during the sunset hours, visible to New Horizons’ cameras.

“The bonus twilight view is a wonderful gift that Pluto has handed us,” said John Spencer, another GGI deputy lead. “Now we can study geology in terrain we never expected to see.”

Discoveries from the data also include photos from three of Pluto’s 6 known moons: its largest Charon, and two smaller bodies, Nix and Hydra. The raw images can be found on the website for New Horizons' Long Range Reconnaissance Imager (LORRI), which show Charon having a reddish Northern pole, and the irregular shapes of Nix and Hydra in sharper detail.

Now already 43 million miles away from its Pluto flyby, New Horizons remains a healthy and spacecraft as it enters the Kuiper Belt, a large disc similar but much much larger than the asteroid belt of Mars.

It’s already sending back data on regions beyond Pluto, as the dwarf planet Eris, once thought to be larger than Pluto, has been determined to be a smaller world. NASA expects New Horizons to fly past at least three visible dwarf planets starting in 2019, before it chases the Voyager probes into the deeper realms of interstellar space.

Pluto Has a Polar Ice Cap, But Probably No Penguins