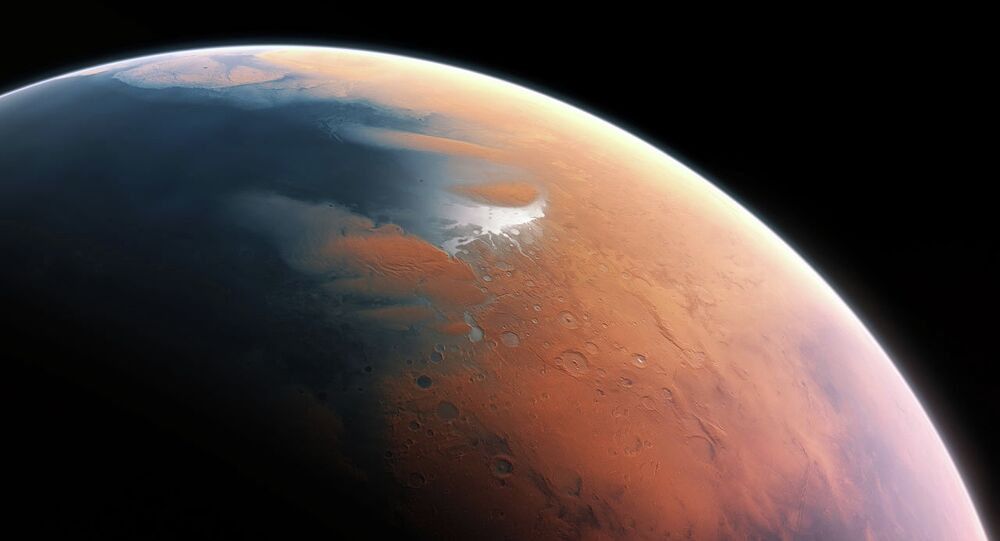 A major catastrophic event eons ago may have made conditions on Mars completely inhospitable to even cellular life, says UK Space Agency Research Fellow Lewis Dartnell.

© REUTERS / NASA
What’s for Dinner? NASA Prepares to Feed Astronauts With Feces on Mars Trip
Dartnell’s hypothesis that life on Mars once existed, only to be wiped out by some sort of catastrophic event, comes just as NASA revealed unexpected volumes of water locked up in ice beneath the Martian surface, along with evidence that a continental crust exists there much like that of Earth’s.

“The atmosphere has been blown into space. It is too cold and dry for any life now,” Dartnell said.

Dartnell’s comments came at a debate on the search for intelligent extraterrestrial life at Bradford University’s British Science Festival.

“There were never any multi-celled life forms, animals, or plants. The myths of canals on Mars will forever remain that.”

Astrophysicists know that the Martian axis is variable and wobbly, partly due to the asynchronicity of the orbits of its small moons, Phobos and Deimos, which only measure a maximum radius of 11 kilometers. Phobos, with an orbit lower than that of synchronous altitude, is in capture of Martian tidal forces, which scientists predict will cause an eventual impact or breakup, perhaps some 50 million years into the future; it is getting six feet closer to Mars’ every century. Deimos’s orbit, also asynchronous, exists beyond synchronous altitude, thus strongly suggesting that, along with a significantly different composition from the planet’s surface, the moons were captured into orbit at some point after Mars’ birth.

The details of the supposed catastrophic event remain a mystery to scientists. What they do know, however, is that the climate patterns that caused the water under Mars’ surface to be later buried under a sheath of Martian dust are no longer present in the atmosphere. It is believed that gases that comprised an ancient Martian atmosphere that supported those weather patterns have since ejected from Mars’ gravity.

© Flickr / Gray Lensman QX!
NASA Hopes to Find Alien Worlds on Gas Giants’ Satellites
Unknown at this time is whether the weak gravity of Phobos, which orbits at an incredibly close 6000 km, or around 1/50th the distance between Earth and its Moon, has been causing the Martian atmosphere to dissipate.

If Phobos is found to be the cause, Elon Musk may want to reconsider his assessment of nuking the Martian icecaps, as he joked Wednesday on Stephen Colbert’s Late Show; he may wish to consider instead using that tactic to eject a possible air-sucking Phobos further away from Mars.