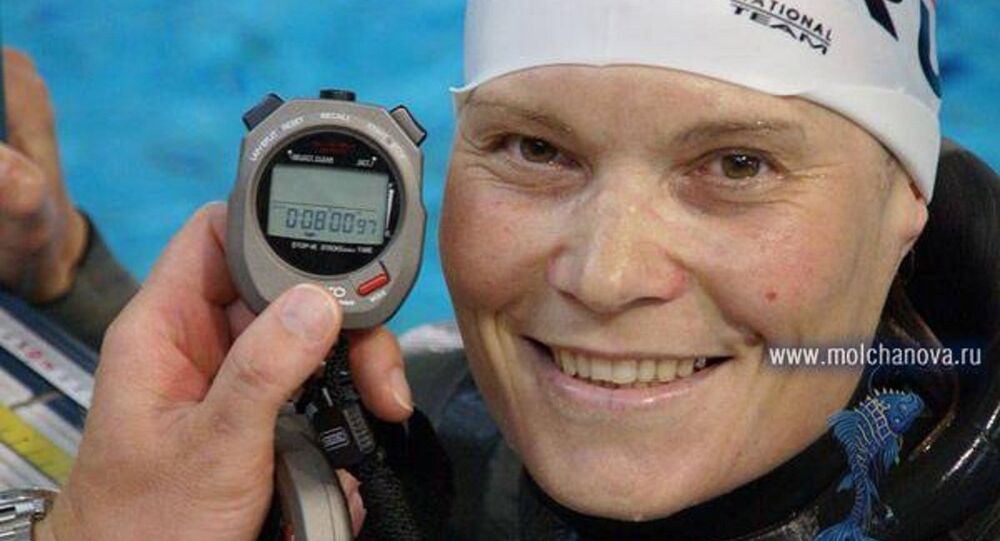 Divers searching for Molchanova announced on Wednesday they had stopped looking for the champion swimmer, considered the most decorated in the history of freediving, who has been missing since a dive on August 2.

© Sputnik / Konstantin Chalabov
Russian Divers Offer to Help Sweden Study 1916 Submarine Sunk in Baltic Sea
Russian freediver Natalia Molchanova is feared to have died after failing to resurface from a dive off the coast of Spain on August 2; on Wednesday rescuers announced they had called off the underwater search for her.
© Photo : Press-service of the Russian Geographical Society/ Alexander Gubin
Russian Divers Set World Depth Record in Arctic
"The underwater part of the search is now over after three days," stated Galina Zveryaeva, a representative of the Russian Freediving Federation (RFF), of which Molchanova was president.

"Now they are looking above the surface- maybe Natalia was lucky and was thrown out somewhere. But that is unlikely," said Zveryaeva.

Molchanova was diving recreationally with a group of divers off the Mediterranean island of Formentera, without fins and to a planned depth of 30 – 40 meters, when she became separated from the group and disappeared.

The sea in the area is 35 to 65 meters deep, and local rescue services suspect that she may have come into difficulty due to strong underwater currents.

"For Natalia, 40 meters was not a great depth. She recently dived to 70 meters. From what I know about Natalia, about what she taught us, and about what is established in the guidelines of the Freediving Federation, such dives should be undertaken with a buoy, a rope and a safety liner."

"If the dive was undertaken in such a way, then any extraordinary situation would result in the emergency ascent of the diver to the surface, and his or her subsequent recue."

"Her son Aleksey has flown out there. I think over the course of time, the information will become clearer."

Molchanova, 53, whose son Aleksey is also a champion freediver, began her competitive career as a swimmer and switched to freediving when she was 40.

She is a 23-time world champion in freediving — diving without apparatus — and has set 41 world freediving records.

Her records include the ability to hold her breath for 9 minutes and two seconds, and swim 237 meters with one breath and a monofin. In September 2009 Molchanova set a new world record for women's freediving when she dived to a depth of 101 meters.