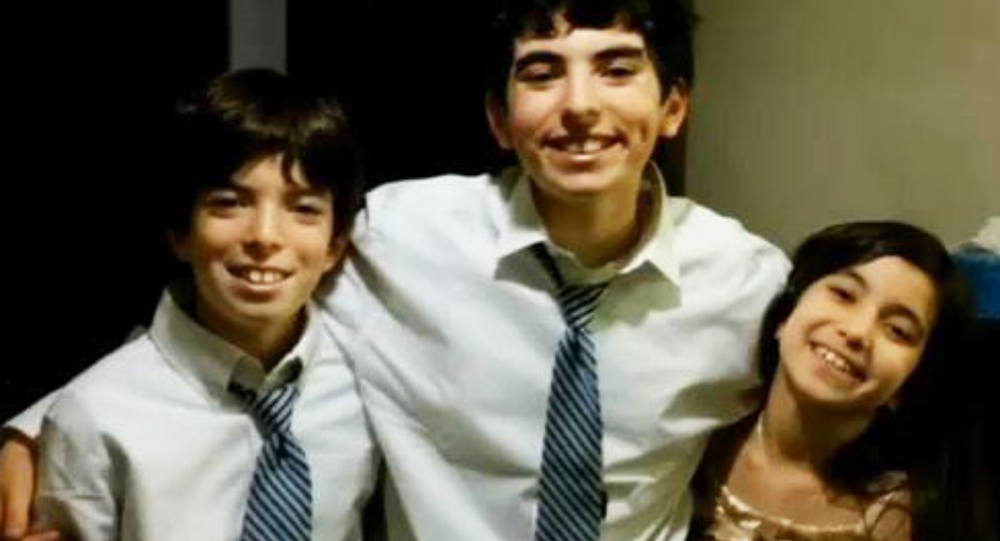 Detroit area mothers have organized a protest after Michigan judge sent three young children, aged 15, 10, and 9, into juvenile detention for refusing to eat lunch with their father, who they claim is violent and hit their mother.

The Tsimhoni children have been ordered into the detention center until they are 18-years-old or they change their mind and eat with their father.  They have currently been imprisoned at Oakland’s Children’s Village for over two weeks.

Maya Eibschitz-Tsimhoni and Omer Tsimhoni have been going through a messy divorce, and on June 24 they attended a court hearing on supervised parenting time.  The children were ordered by the court to attend a lunch with their father.  They refused.

The eldest child attempted to explain why he did not want to see his father, telling the judge,“I do apologize if I didn’t understand the rules, but I do not apologize for not talking to (the father) because I have a reason for that and that’s because he’s violent and I saw him hit my mom and I’m not going to talk to him.”

“I didn’t do anything wrong,” the boy said.

“But he was the one that (did) something wrong. I thought there (were) rules.. for not hitting someone,” the child stated.

“You’re supposed to have a high IQ, which I’m doubting right now because of the way you act,” Gorcyca said.

The judge then proceeded to praise the boy’s father to the point where it seems as though she has a personal interest.

The judge then went even further, comparing the boy to “Charlie Manson’s cult.”

“You need to do a research program on Charlie Manson and the cult that he has,” Gorcyca said. “You have bought yourself living in Children’s Village, going to the bathroom in public, and maybe summer school.”

On top of that, she forbid the child’s mother or any other relatives from visiting him during his incarceration.  She did not even allow his mother to say goodbye to him or attempt to convince him to speak to his father.

“One day you are going to realize what’s going on in this case and you’re going to apologize to your dad,” Gorcyca continued. “Dad, if you ever think that he has changed and he’s no longer like Charlie Manson’s cult, then you let us know and we can (review the case).”

The judge then went on to praise Maya Eibschitz-Tsimhoni for attempting to get the children to have a relationship with their father.

Next, the judge spoke to the two younger children, and it was not any less alarming than when spoke to the eldest.

“Dad, the judge wanted me to talk to you so here is something about myself? I enjoy soccer and I hope to be on the soccer team,” the 10-year-old stated.

When the youngest child was asked if she would also like to apologize to her father, she gave no audible response.

“I know you’re kind of religious, God gave you a brain. He expects you to use it. You are not your big, defiant brother who’s living in jail. Do you want to live in jail?” Gorcyca asked the 9-year-old child.

“Let’s see, you’re going to be a teenager, you want to have your birthdays in Children’s Village? Do you like going to the bathroom in front of people? Is your bed soft and comfortable at home? I’ll tell you this, if you two don’t have a nice lunch with your dad and make this up to your dad, you’re going to come back here (after lunch) and I’m going to have the deputies take you to Children’s Village.” Gorcyca asked her.

Their father then suggested that the trio eat lunch in the cafeteria at the courthouse, and asked the 10-year-old boy what he thought of the idea.

“I’ll go with my brother (to Children’s Village) then,” he said.

Gorcyca informed him that he would not be allowed to see or contact his siblings at Children’s Village and asked the youngest child if she would go, and she refused.

She has required the children to undergo psychiatric therapy and mental evaluations during their imprisonment and hand wrote an order to the detention center to keep them away from each other as much as possible.

An attorney has filed a Writ of Habeas Corpus to get the children back into the courtroom and before the judge, but it is not scheduled to be heard until July 15.  The documents ask that the judge lift the contempt ruling or show why the children are “deprived of their liberty,” the Daily Tribune reported.

Dozens gathered outside the courthouse, organized by local mothers, on Wednesday demanding that the judge change her mind and release the children.

"My concern is I love these kids," Mark Honeyman, a former teacher who attended the protest, told My Fox Detroit. "I think they're incredible kids. If the ultimate goal is to reconcile with their father, there has to be a better way than this."

A review hearing has been scheduled for September 8th.