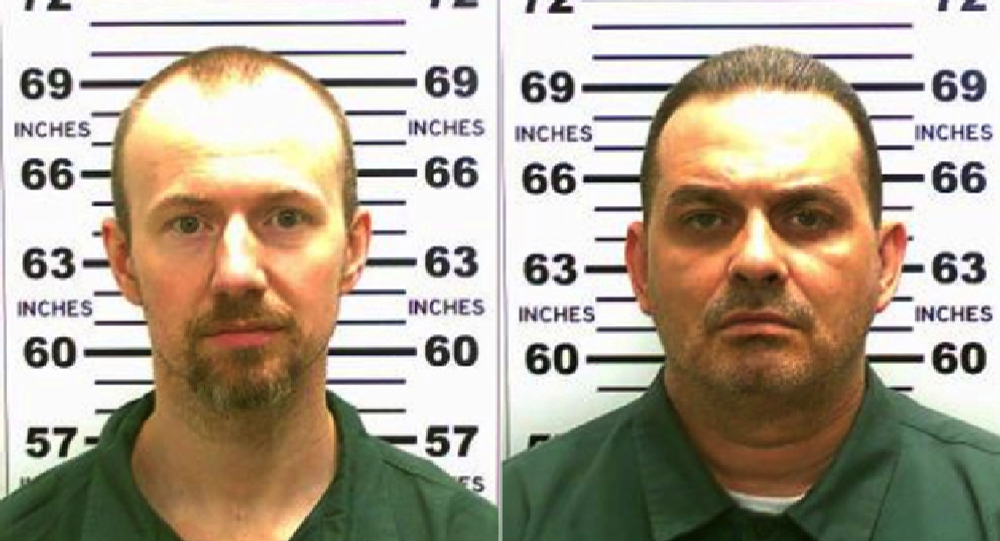 Two convicted murderers escaped from their maximum security prison in New York on Saturday, possibly with the aid of a prison worker who had been charmed into believing that they were in love.

Joyce Mitchell, an industrial training supervisor in the tailor shop at Clinton Correctional Facility in Dannemora, New York, had developed a romantic relationship with Richard Matt, 48, a man who violently tortured and killed his elderly boss in 1997 before dismembering him with a hacksaw.

"She thought it was love," an unnamed official told NBC News.

On Saturday, Matt and another inmate, David Sweat, 34, who was in prison for killing a cop who caught him and his cousin moving stolen guns, escaped by cutting through steel walls, crawling through a steam pipe and climbing out of a manhole.

Mitchell, the wife of another prison worker, was supposed to drive the getaway car for Matt and Sweat, but got cold feet and checked herself into the hospital for panic attacks. It is unclear whether or how she assisted them in the actual jailbreak, but she has been indicted for her role in the escape.

"She befriended the inmates and may have had some sort of role in assisting them," State Police Superintendent Joseph D'Amico told reporters on Wednesday.

The police have her cellphone, which was reportedly used to call people who are close to Matt.

"She is not the kind of person that's going to risk her life or other people's lives to let these guys escape from prison," her son, Tobey Mitchell, told NBC News. Though he has not spoken to his mother since she checked herself into the hospital, he believes that she was not romantically linked to Matt and may have been acting under threats.

Over 500 law enforcement officers, as well as the FBI and canine and aviation units, have a massive search underway that has now spread to the neighboring state of Vermont.

If caught, the maximum penalty for an escape is seven years.  Matt was already serving 25 years to life, and Sweat was more than a decade into a life sentence.

On Wednesday, the duo broke the record for the longest jailbreak in New York history, as the previous record was three days.  In the last decade, there have been 30 escapes from New York prisons, and 60% of them lasted less than six hours.

New York State is offering a reward of $100,000 for information leading to the two men’s arrests.