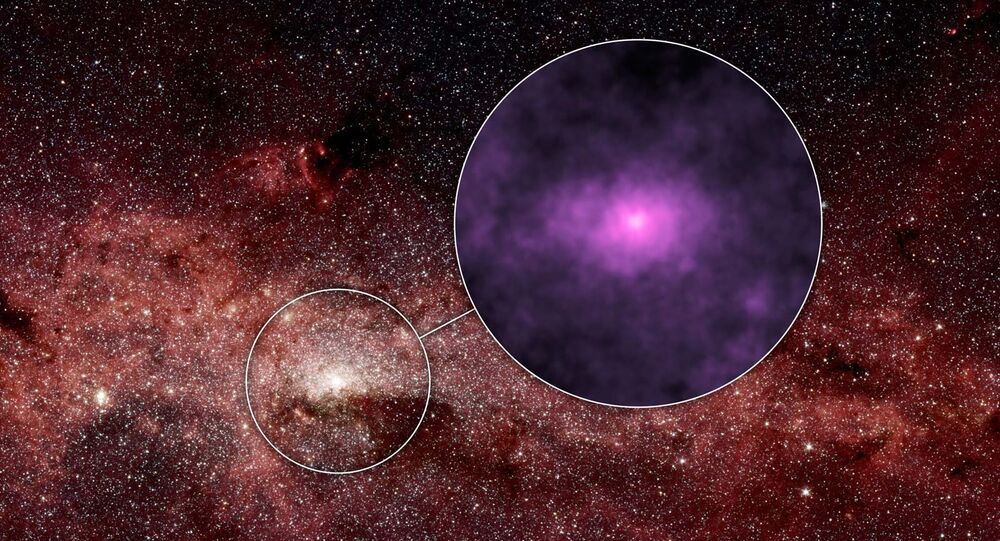 New images captured by NASA of a mysterious glow at the center of our galaxy may have been produced by the "howls" of dead stars feeding off their live companions.

Earth is located in the relative boondocks of the galaxy — fairly far out into one of the spiral arms. But the center is comparatively bustling — full of stars both active and dead, "stellar corpses," gas clouds, and smaller black holes all swirling around one supermassive black hole.

But recent images show a strange glow of high energy X-rays at the center of all the activity (shown in magenta above) that NASA scientists have struggled to explain.

In a written statement, Kerstin Perez of Columbia University in New York, lead author of the report published in Nature said the images reveal "a completely new component of the center of our galaxy."

One of NASA's newly released theories is that the glow may be caused by X-rays released as binary systems of dead "zombie" stars — perhaps white dwarfs, perhaps small black holes — pull away material from their partners.

When white dwarfs — which are very dense — siphon matter off of a partner in a binary system, that's commonly called a "vampire system" in astronomy lingo. In about 5 billion years our sun is destined to become a white dwarf.

But the glow may also be caused by pulsars — highly charged, dense, fast spinning neutron stars formed through the collapse of a supermassive star after a supernova.

Or, the culprit could be cosmic rays — high energy radiation travelling through space at nearly the speed of light. The rays may be produced by the supermassive black hole — Sagittarius A* — at the center of the galaxy.

There's so much going on at the galaxy's core, it's difficult to tell what's causing the stronger than expected X-ray glow.

"The area is crowded with low-energy X-ray sources, but their emission is very faint when you examine it at the energies that NuSTAR observes, so the new signal stands out," said Perez.

NuSTAR was launched in 2012 as the first telescope that can gather high quality images of the bustling galactic center. The telescope generates images of X-rays, which are high-energy, so the images can clear away some of the the low-energy information and clarify the picture of the core.

"It was like turning off the lights on all that low-energy stuff," Perez told the Verge.

The NuSTAR team, which works out of NASA's Jet propulsion Laboratory in Pasadena, Calif., says they plan more observations as they study the various possible explanations for the new images.

While the new observations may raise more questions than they answer, report co-author Chuck Hailey of Columbia University says it’s only reasonable that stellar bodies "exhibit weird behavior" in ways we might not have predicted when they're in a more crowded atmosphere.

"This new result just reminds us that the galactic center is a bizarre place."

NASA Contributes to Rescue Efforts in Nepal After Devastating Earthquake