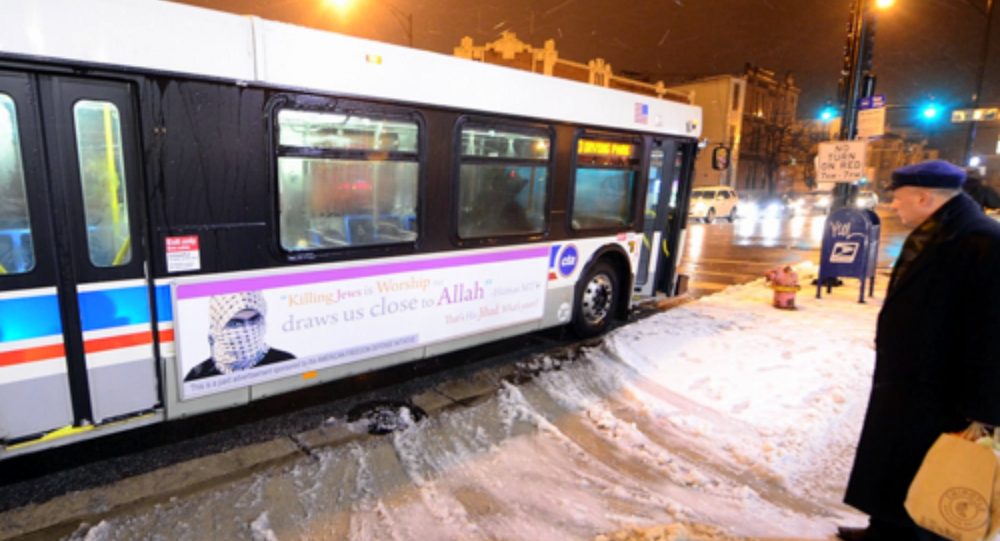 New York’s Metropolitan Transportation Authority (MTA) may adopt a new policy that would allow it to ban a controversial advertisement submitted by an anti-Muslim group.

The MTA’s board is expected to vote on the new policy on April 29, according to a letter issued to US District Judge John Koeltl in Manhattan. If passed, the policy would allow the organization to reject all "advertisements of a political nature."

This comes after a recent ruling issued to Judge Koeltl ordering the MTA to run an advertisement submitted by the American Freedom Defense Initiative (AFDI), a far-right anti-Muslim organization. The group has sponsored several controversial ads in recent years, most of which are laced with anti-Arab and anti-Muslim rhetoric.

The advertisement in question portrays a man with a Keffiyyeh, or a headscarf, wrapped around his face and a quote reading "Killing Jews is worship that draws us close to Allah." The quote is attributed to "Hamas MTV" with the additional kicker: "That’s his Jihad. What’s yours?"

© Flickr / Steve Rhodes
The American Freedom Defense Initiative has sponsored several controversial ads in recent years, most of which are laced with anti-Arab and anti-Muslim rhetoric.

When the MTA rejected the ad, the AFDI filed a lawsuit against the Authority claiming that it violated a constitutional right to freedom of expression. Koeltl sided with AFDI, saying the ad did not meet the criteria of inciting violence. The ruling was lauded by the anti-Muslim group, with AFDI President Pam Geller calling it a "triumph for liberty and free speech."

However, the proposed policy would allow the MTA to nullify the Judge’s order and exclude the ad by converting all transportation property into a "limited public forum." Such a designation would enable the state-run authority to limit free speech by prohibiting specific content from its facilities — in this case, political ads.

According to a letter written by MTA lawyer Peter Sistrom, the authority’s ability to do this is "beyond dispute," meaning that if passed, the policy would effectively moot the ADFI’s case. Sistrom added that the policy has been in the works for quite some time, denying claims that it was a "hasty reaction" to Koeltl recent ruling.

Not surprisingly, the AFDI is not pleased with the proposal.

"The notion that the MTA can moot a constitutional violation by changing its policy after the fact and wishing away the violation is absurd," the group’s lawyer David Yerushalmi said in an email to Reuters.

"Our complaint has a damage claim for past harms (even if only nominal damage). The fact alone precludes the argument that the case is moot."