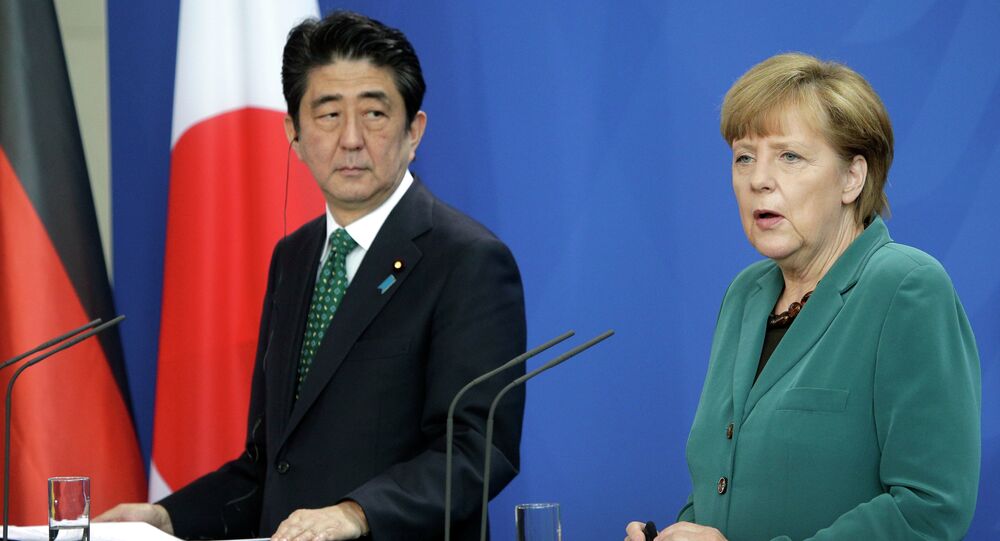 In a phone call with Shinzo Abe on April 1, Merkel urged the Prime Minister to have his country apply for founding membership status at the AIIB, which is expected to be fully established by 2015. The phone call has not been disclosed until recently, when Japanese government officials reportedly informed Japan’s Jiji Press agency on Wednesday.

Japan is a notable regional absentee from AIIB, which currently has 57 nations with founding member status, a number of which are key US allies.

The Obama administration, concerned with the expansion of Chinese influence in the Asia-Pacific, has been rallying allies and trade partners to forgo membership since Beijing announced plans to launch the development Bank in 2013. Yet, one by one, US allies have flocked to the AIIB.

European allies, including the UK and Germany, were among the first to join the Bank, setting off a proverbial domino effect that has been viewed as a snub to the White House’s warnings, as other nations followed suit. Now, the list of founding member applicants includes notable allies, such as Israel. Australia and South Korea were among the most recent regional allies to apply for membership in March, despite pressure from the Obama administration.

Japan is currently the only major US ally in the Asia Pacific that has held back from applying for membership. Tokyo shrugged off a March 31 deadline set by China to join, however, an unnamed government source told Reuters that the matter was still being considered.

"It’s not a matter of setting a deadline. Our stance remains unchanged that we must cautiously watch how [China] guarantees fair governance at the AIIB," the source said, "We have not ruled out the possibility of either joining or staying out."

Tokyo and Washington are concerned that China is establishing a parallel economic order that could weaken the World Bank and the Manila-based multilateral Asian Development Bank (ADB), which is dominated by both Japan and the US. Both countries have also cited similar concerns regarding the AIIB’s governing structure and have said the Bank may erode international lending standards of transparency.

An advisor to Shinzo Abe told Reuters that the views within the government remain mixed over whether or not to join AIIB. Some are concerned about the impact signing up would have on Japan’s alliance with the US, while others are worried about the disadvantage of joining the Bank late, or not at all.

If Japan does decide to join, however, the move will likely be viewed as the final nail in the coffin of the US’s not-so-covert campaign.