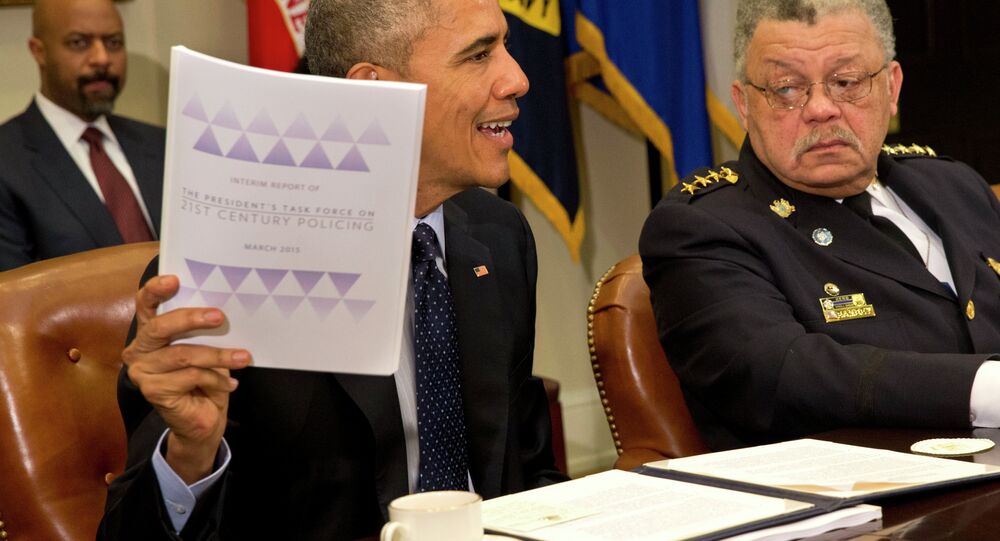 In its first report released since being formed by President Barack Obama last year following a slew of police killings of unarmed black men, a task force on police reform recommended changes to US law enforcement standards -- but stopped short of requiring officers to wear body cameras.

The interim report, released Monday by the Task Force on 21st Century Policing, calls for minimizing the use of military-level equipment by police, but did not adopt proposed policies like body cameras and tying federal funding to racial-bias training for officers.

Monday’s interim report follows 90 days of hearings and meetings with a wide range of civil rights groups and local police agencies. The full report is expected to be released in April.

Task force members said that body cameras could be helpful, but that privacy concerns need to be considered first, TIME reported.

“Any technology we apply, we need to understand its usefulness,” Ramsey said during a conference call with reporters. “But we also need to make sure we’re working within a constitutional framework.”

“Today we’re talking about body cameras, but tomorrow it will be something else,” he added.

The report did call for independent prosecutors to investigate whenever an officer kills a civilian while on duty, and urged the federal government to keep better records on officer-involved shootings.

Marc Morial, president of the civil rights organization National Urban League, which called for more body cameras in testimony to the task force, praised the recommendations for independent investigators, but said that not coming down hard in favor of body and dashboard cameras a “missed opportunity,” TIME reported.

“Privacy concerns that might be there are not enough to put the brakes on an idea whose time has come,” Morial said.

While Obama appointed the task force, he does not have to adopt its recommendations, and in many cases, does not have the power to do so, as most policing is done on state and local levels.

© AP Photo / Jacquelyn Martin
President Barack Obama speaks while meeting with members of the Task Force on 21st Century Policing at the White House on Monday.

"A lot of our work is going to involve local police chiefs, local elected officials, states recognizing that the moment is now for us to make these changes. We have a great opportunity, coming out of some great conflict and tragedy, to really transform how we think about community law enforcement relations so that everybody feels safer and our law enforcement officers feel, rather than being embattled, feel fully supported," he said before meeting with the task force on Monday.

"We need to seize that opportunity. And so this is something that I'm going to stay very focused on in the months to come," he added.

Following the deaths of Michael Brown in Missouri and Eric Garner in New York – unarmed black men who died at the hands of police – Obama and Attorney General Eric Holder responded with a pledge to improve relations between police and minority groups.