Scientists have successfully used microscopic drones to clear clogged arteries in mice, a breakthrough that has researchers optimistic that the technology could prevent heart attacks and strokes in humans.

The trials mark the first successful tests of nanoparticles, or “drones,” in mice. Scientists hope to conduct the first patient trials soon.

The nanoparticles are designed to latch on to hard plaques in the arteries, made from fat cholesterol and calcium, which cause heart disease, the Telegraph reported. Once they reach their target, the drones release a drug derived from a natural protein that repairs inflammation damage in the body.

Each of the tiny particles, made from a plastic-like material, is 1,000 times smaller than the tip of a human hair, the Telegraph reported. 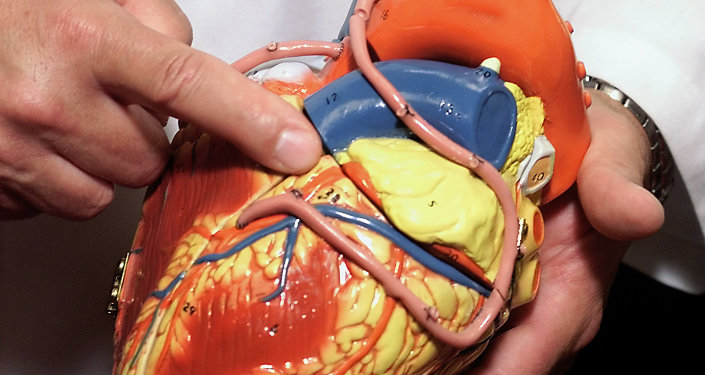 © AP Photo / Tom Gannam
A doctor uses a model of the human heart to point out one of the three major coronary arteries, the one sometimes called "the widowmaker."

In the tests, atherosclerosis, or clogged arteries, in lab mice was significantly repaired after five weeks of treatment, and plaques were stabilized, making it less likely for fragments to break off and clog blood vessels.

“This is the first example of a targeted nanoparticle technology that reduces atherosclerosis in an animal model,” said lead researcher Dr. Omid Farokhzad, director of the Laboratory of Nanomedicine and Biomaterials at Brigham and Women's Hospital in Boston

He said the trial suggested the tiny particles could be used in a number of different treatments.

"The inflammation resolving targeted nanoparticles have shown exciting potential not only for the potential treatment of atherosclerosis as described here, but also other therapeutic areas including wound repair, for example,” he said.

The nanoparticles are made from a biodegradable polymer that dissolves away in the body over time, The Telegraph reported. The polymer is already used in a number of approved medical products.

Mice injected with the nanoparticles saw reduced inflammation and a thickening of collagen layers in atherosclerotic plaques that prevented them from rupturing. Plaques also shrunk and were cleared of dead cells accumulating within them.

Similar results did not occur when the protein drug was administered without being attached to the targeting nanoparticles, the Telegraph reported.

For human trials, scientists plan to fine-tune the particles to optimize drug delivery, and to package them with more powerful anti-inflammatory drugs.