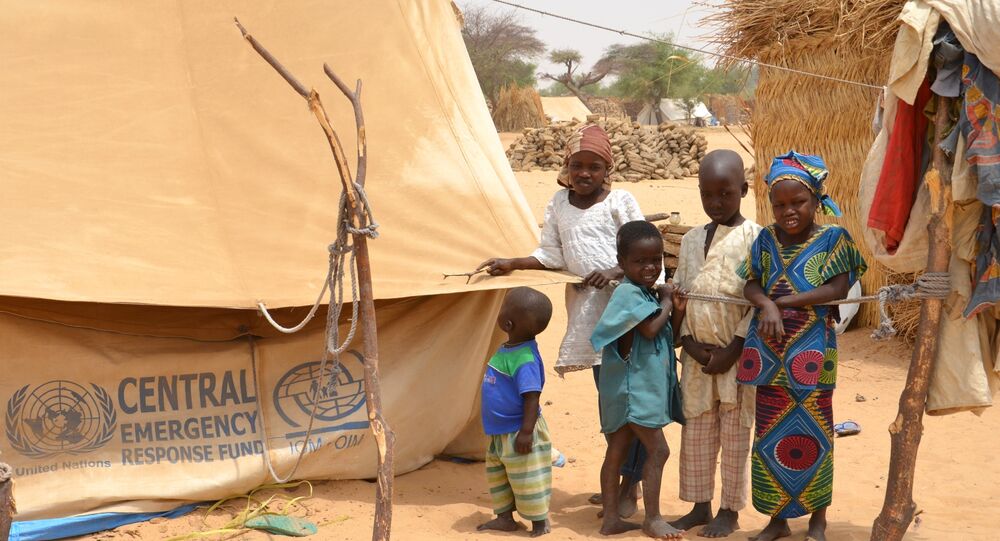 Beyond the Murder: Missing Children and the Impact of Boko Haram’s Terror

African terrorist group Boko Haram’s kidnapping of hundreds of Nigerian schoolgirls, attacks on villages and the senseless murder of thousands of civilians has stolen global headlines over the past year, however beyond the killing is a growing humanitarian crisis tearing apart swathes of Africa.

Following Boko Haram attacks on villages in the southeastern Diffa region of Niger, 7,000 people have been forced to leave their homes and have made their way to Zinder, the country’s second largest city.

The sudden influx of refugees has meant that many people who fled attacks from the Islamist group are now homeless and without the essentials like adequate water and food, sparking humanitarian concerns from aid agencies working in the country.

The International Rescue Committee (IRC), who have set up aid efforts across Niger, say they fear for many women and children who are without food, water and blankets, and are currently being forced to sleep at a local sporting stadium.

#Nigerian #refugees in #Niger. A huge challenge. Now, the place of refuge is not secured. Displacement continues. pic.twitter.com/A1J8Ry3hCd

While there are fears for those who have been forced to flee their homes, the IRC’s Niger country director Matias Meier says he is also concerned that thousands of people who didn’t make it to Zinder and stayed behind in the Diffa region, will not have access to adequate food, water and shelter supplies.

“Diffa town is practically deserted, most shops have closed and traders have fled to Zinder. For those that remain, food will soon become scarce. We are also very worried about the safety of around 3,500 people living without shelter in villages to the north of Bosso Town. They have no choice but to risk travelling up to 7 km to Lake Chad to collect untreated water, leaving them further vulnerable to disease.”

The fact that so many people managed to make it to the larger city of Zinder was down to a stroke of luck itself, with a Zinder-based truck company rescuing 5,000 people who were fleeing the country’s southeastern province on foot.

Mr. Meier said: “People were running for their lives and it is only thanks to the incredibly generosity of [truck company owner] Mr. Moussa Abdou that so many people have managed to arrive safely. Now they are in Zinder they are in desperate need of food. With local families hosting as many as 20 people each, they also need the basics such as mattresses, bowls and cutlery. In an even more desperate situation are those people sleeping rough without food and blankets at the stadium.”

Some of Mr. Moussa Abdou’s trucks that helped 5,000 people from #Diffa find safety in Zinder, free of charge. pic.twitter.com/e9ZL7HPPyQ

To add extra strain to the humanitarian effort, the now predominantly evacuated Diffa region of Niger had already received an influx of more than 170,000 people since 2013, who had fled neighbouring Nigeria as a result of Boko Haram’s terror.

The International Organisation for Migration estimates that more than one million people have been displaced as a result of fleeing Boko Haram’s violence, while some estimates suggest the civilian death toll in 2014 and early 2015 alone could be as high as 6,000.

Boko Haram may have forced up to one million people into displacement according to the IOM http://t.co/tuCLDzYJBm

The group Boko Haram, whose name roughly translates to ‘Western education is a sin,’ is an Islamist terrorist group formed in Nigeria in the early 2000s which aims to create a state following strict Sharia law.

On top of the many murders they have committed, the group is also responsible for a number of kidnappings, suicide bombings and other human rights breaches.

As many cities and towns struggle to deal with the sudden influx of refugees, there are also concerns that the conflict has displaced many children from their families.

Aid groups have been working hard to try and reunite many young Nigerian children with relatives, as well as providing counseling to young people suffering from trauma as a result of the violence they have witnessed.

Simon Clarke from the IRC says that while many young children have been reunited with their families, many others have been left orphaned by the attacks, which is proving to be a "big problem" across the region.

Many of those offering aid services in Nigeria and Niger are concerned that the trauma faced by young children in the region may have ongoing social effects, as many displaced children don't have access to education and don't have anything to do.

"A lot of young ones are suffering from trauma and there's loads of psychological problems," said Mr. Clarke, who is working at an aid camp in Yola, Northern Nigeria.

"We're not sure how long a lot of these children are going to be in the camp. It's certainly going to be months, it could be years."

He also says that the poverty associated with the Boko Haram attacks is also having impacts on local society, as women are engaging in prostitution to pay for food, while there has also been reports of opportunistic rape in some areas.

"We're very concerned about the impacts down the line, because we've got this generation from the north east [of Nigeria] who are already extremely poor, having less than what they had in the first place, so it's got huge implications for the future."

While the ongoing terror campaign undertaken by Boko Haram has claimed thousands of lives and is a very real and instant threat for those in Nigeria, Niger and bordering countries, the tragic events are also set to have ongoing humanitarian and social impacts on the population for many years to come.