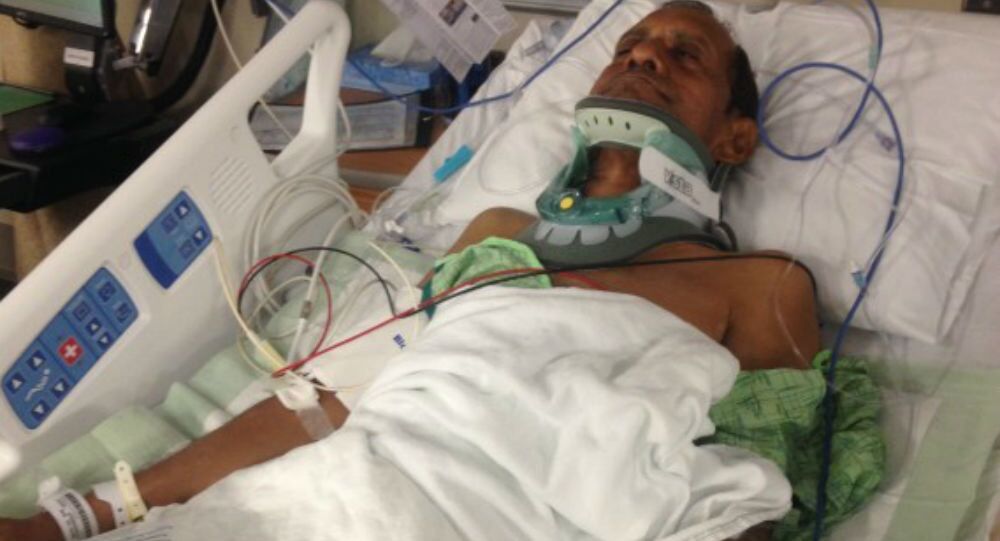 Eric Parker was fired and arrested on charges of assault, after a 57-year-old man visiting from India was left partially paralyzed by his encounter with the officer, who turned himself in Thursday.

Sureshbhai Patel of Gujarat, India was visiting his children in Madison, Alabama, to help care for a newborn grandchild with health and developmental problems. On Feb. 6 he was taking his morning walk when police stopped him in response to a “suspicious person” call. A neighbor had reported a man looking in people’s garages.

Patel’s answers in limited English and his attempt to continue his walk were met with a body-slam onto a lawn, caught on the police officer’s dash cam. After he reported having no feeling in his arms and legs he was rushed to the hospital where he underwent cervical fusion surgery and regained partial feeling. He is now unable to walk, and doctors say that if he recovers it could take months.

Madison Police Department (screen shot)
In the two dashcam videos released by the police department one officer can be heard telling the other, “He’s saying ‘No English’”, then continuing to question Patel before slamming him to the ground.

The FBI is looking into the incident as a violation of civil rights, and will turn over their findings to the Department of Justice. The family’s attorney, Hank Sherrod, filed a lawsuit on those grounds against the Madison Police Department Thursday, and they are seeking damages.

“First, I’m hoping that the truth will come out, second that this case might bring to life the real issues we have in this country about the police abuse of power where someone can’t try to blame it on the victim,” Sherrod told The Washington Post. “Here we’ve got someone who is truly blameless and innocent. He was brutalized, and hopefully will, but may never, walk again.”

Sherrod says that where the problem really started was the “suspicious person” call to the police from neighbors.

“This is broad daylight, walking down the street,” Sherrod told the Huntsville Times. “There is nothing suspicious about Mr. Patel other than he has brown skin.” The lawsuit states that Patel told the officers “No English,” “Indian,” and “Walking,” and tried to point out his son’s house.

In the two dashcam videos released by the police department one officer can be heard telling the other, “He’s saying ‘No English’”, then continuing to question Patel as to where he lives and where he’s going. At one point, after Patel has once again tried to continue walking the officer says "Do not jerk away from me again, or I will put you on the ground. Do you understand?"

As the officer grabbed Patel and threw him on the ground another police car approached, and the first officers can be heard telling the new officer, “He can’t speak a lick of English.” The officers tried for several minutes to get Patel to stand up, before calling medical services.

A GoFundMe page has been set up for donations to pay Patel’s medicare care which will include a lengthy recovery and rehabilitation period. Patel does not have insurance.

Patel’s son, Chirag Patel, moved to the United States a decade ago, married a US citizen, and became naturalized in 2012. His father was then approved for permanent residency as a family member. Chirag told the Times he was happy to move to Madison.

“It is a dream for me because I came from a very poor family and I worked so hard here,” Chirag told the Times. “I’m totally devastated that I might have made a big mistake.”