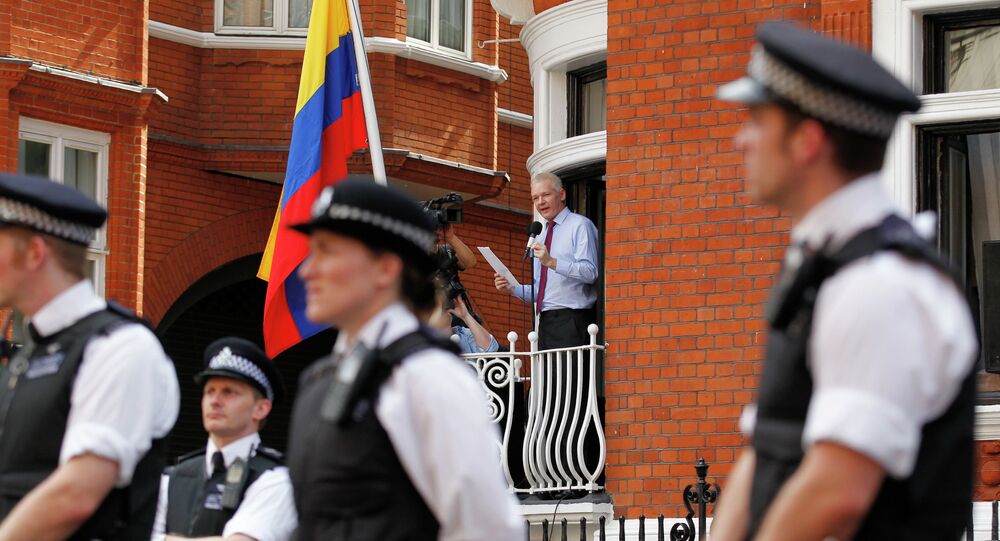 Money for more than 8 million meals for the needy, enough to get 50,000 children vaccinated and cash to pay for the school fees of 17,000 students. According to activists, that's what the UK government could have spent money on instead of guarding Julian Assange in London's Ecuadorian embassy.

The website govwaste.co.uk has put together what it claims to be the cost of employing police officers to guard the embassy in London, amid growing calls for something to be done to break the current stalemate.

Based on statements from Metropolitan police officers, who last month said that £9 million had been spent since June 2012 hiring police officers to permanently guard the embassy, the website claims more than £10 million of taxpayers' money has been spent throughout the operation.

It claims that the money spent could have been used for a variety of different purposes, including feeding the needy, paying teachers and buying more hospital beds.

There have also been suggestions that the costs of keeping an eye on Assange have outweighed the amount put into the much-delayed Chilcot report into British involvement in the Iraq war and the Westminster paedophilia investigation.

Nearly £10m and moving to 3 years: who will hold Sweden to account for this waste of UK taxpayer money? http://t.co/UX8uoHNDde #Assange

The site has renewed calls for cooperation to try and solve the impasse, which has seen the former WikiLeaks chief holed up in the Ecuadorian embassy for close to three years.

This isn't the first time there has been criticism of the costs associated with guarding Mr. Assange, with London mayor Boris Johnson telling a Home Affairs Committee in 2013 that the effort was taking away funds and resources from other policing efforts.

"It's absolutely ridiculous, that money should be spent on frontline policing. It's completely wasted," he said.

Baroness Jenny Jones, deputy chair of the Police and Crime Committee at the London Assembly, has also criticised proceedings, saying that the costs for keeping Assange holed up were "ridiculous."

It also follows suggestions that British authorities are becoming fed up with the ongoing situation, with deputy foreign minister Hugo Swire last year telling parliament that he would "actively welcome" Swedish prosecutors to London to question Assange.

Julian Assange was granted political asylum by Ecuador, but has been living in the country's embassy in London, as he is wanted for questioning over sexual assault claims allegedly committed in Sweden in 2010.

However, Assange's legal team fears that an extradition to Sweden could lead to him being transported to the United States, where it's feared he could face espionage charges.

The British government confirmed they will not guarantee the Australian a safe passage to Ecuador, and will arrest Mr. Assange should he leave the Ecuadorian embassy.

Despite the stalemate, Assange made a statement in August 2014, saying that he would be leaving the embassy "soon", stating that there had been a number of legal developments in the UK.