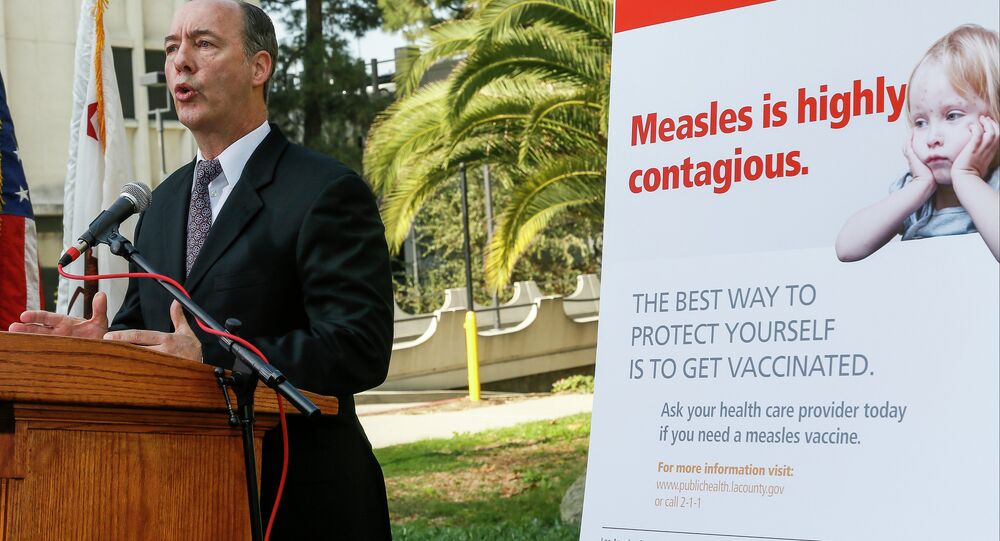 In the midst of its worst measles outbreak in 20 years, two California state senators will push to repeal the "personal belief exemption" that allows parents to opt out of vaccinating their children against preventable diseases.

"We shouldn't wait for more children to sicken or die before we act," Democratic Senator Richard Pan, who is also a pediatrician, said at a press conference. "Parents are letting us know our current laws are insufficient to protect their kids."

Democratic Senator Ben Allen, a co-sponsor of the bill, said "The high number of unvaccinated students is jeopardizing public health."

Easy-to-obtain exemptions leave tens of thousands of schoolchildren unvaccinated, which puts others at risk.

"My husband and I worry our son will get sick if we put him in daycare," said mother Leah Russin, who joined Pan and Allen at the press conference. "Many daycares in our area have vaccination rates well below what is necessary to protect the community.”

"As measles spread, I counted the days until I could get my son his MMR vaccine," she added. "We do this because it protects our kids and the community."

It is not clear if the legislation would remove the "religious exemption" that allows parents to refuse vaccination. Those exemptions account for only one half of 1% of all incoming kindergartners, the San Jose Mercury News reported.

In 2012, Pan was an Assemblyman when he introduced a law that forced parents seeking exemptions to receive counseling and signatures from health care professionals. The law led to a 20% decrease in parents opting out of vaccinating their kindergartners.

Legislators created personal belief exemptions in response to questions about why religious beliefs hold favor over personal beliefs, according to James Colgrove, a Columbia University School of Public Health professor and author of a book on the politics of vaccination.

"It was a response by state legislatures to be fair among people who have sincerely held beliefs,” he told the paper. “The creation of this loophole was also pragmatic, because lawmakers have been very worried about managing public opposition.”

“There are a non-trivial number of people who really dislike vaccinations, and if you don't give them some way out, they will lobby the Legislature to get laws completely abolishing (compulsory) vaccination," Colgrove said. "That is the fear — that if lawmakers don't let the 'hard core' opponents off, they'll attack the laws completely."

The US had more cases of measles in January than the number that is typically diagnosed in a full year, the New York Times reported.

There are now 102 people in 14 states who have become infected with the extremely contagious measles virus, according to the U.S. Centers for Disease Control and Prevention. A majority of the cases this year have been tied to an outbreak at Disneyland, which began in December.

Last year, the number of cases was several times more than the average since 2000, when the disease was declared eliminated in the US.