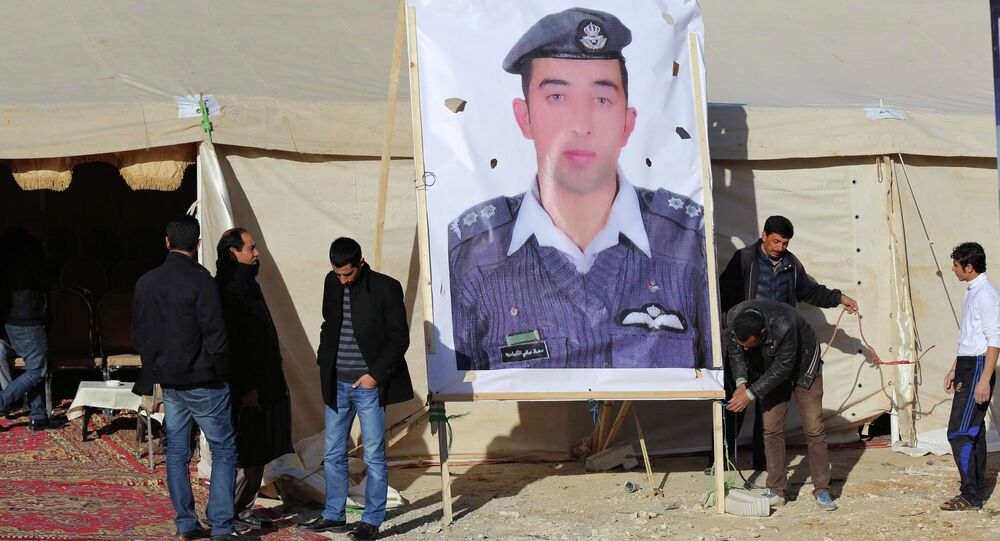 A Jordanian pilot taken hostage by ISIL in December has been killed by the militant group. Jordan vowed to execute al-Qaeda prisoners Sajida al-Rishawi, Ziad al-Karbouli and four other militants in retaliation.

The Jordanian pilot, Muath al-Kasaesbeh, who was captured by the Islamic State of Iraq and the Levant (ISIL) in December after his plane crashed on terrorist-controlled territory in Syria, has reportedly been burned alive on Tuesday.

Jordan has been making efforts to exchange the pilot for al-Qaeda prisoner Sajida al-Rishawi, who was arrested after a failed suicide bombing attempt. However, one of the conditions for the exchange was that ISIL show proof of the pilot alive.

Earlier, Jordan threatened to hang every ISIL prisoner they currently hold if their pilot was harmed.

A video that shows the pilot being burned alive was distributed on a twitter account that posts ISIL-related propaganda.

The video shows Kasaesbeh wearing an orange jumpsuit, inside a cage, being consumed by fire.

The pilot's family and Jordanian officials have confirmed the video is authentic. Jordanian State TV reported that he was killed on January 3, 2015.

Within hours after the video was posted, Jordanian officials said the government will execute six al-Qaeda prisoners, including Sajida al-Rishawi and Ziad al-Karbouli, for terrorism-related crimes, according to Lebanese news site el-Nashra.

The director and co-founder of the SITE Intelligence Group that tracks militants online said the video entitled "Healing of the Believers' Chests," is the militants' "most barbaric video yet."

Photographs of Kasasbeh were released showing his semi-naked body being pulled from water by gunmen shortly after the execution.

Goto was reported missing in October.  He appeared in a video released by ISIL holding a picture of Yukawa’s beheaded body on January 24.

The militant group had demanded a ransom of $200 million for their release.

On January 27, a voice in another ISIL video, claiming to be Kenji Goto, warned that he and the Jordanian Air Force pilot would be killed within 24 hours if they were not exchanged for Sajida al-Rishawi, an Iraqi suicide bomber facing a death sentence in Jordan.

The King of Jordan who is in the U.S. is expected to cut his trip short and head back to Jordan, following the killing of the Jordanian pilot after failed international efforts to release him.

President Barack Obama said earlier this week that a 26-year-old American woman is currently being held by ISIL. The unnamed female is believed to be the only US citizen held captive by the terrorist organization, after it beheaded aid worker Peter Kassig in November.