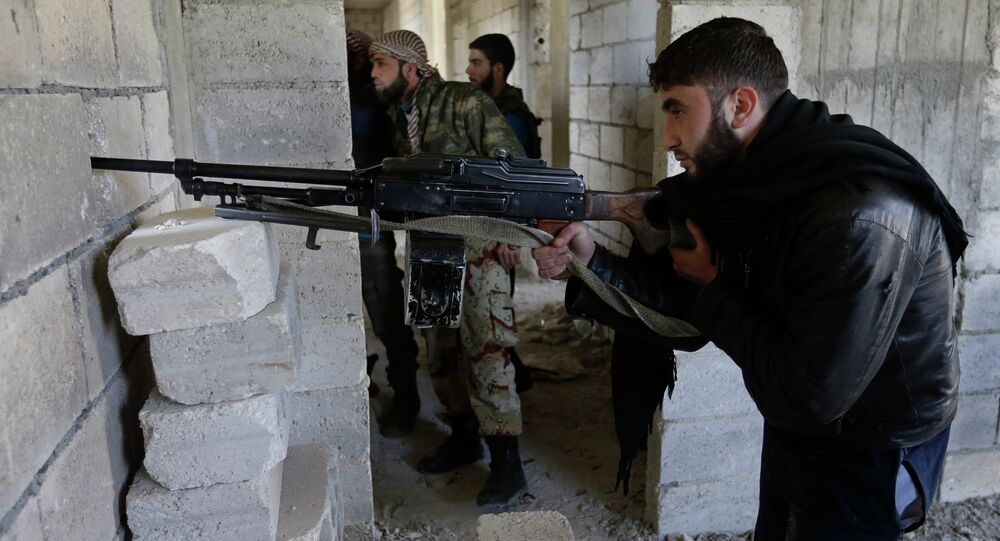 A rebel group in Syria supported by the United States joined an alliance of largely jihadist groups that includes the Islamic Front, a coalition backed by Saudi Arabia.

The Hazzm movement joined the Jabhat al-Shamiyya, or Levant Front, after an increasing number of attacks against them by al-Qaeda’s al-Nusrah Front.

The Hazzm movement was considered a non-jihadist opposition group fighting to topple the Bashar al-Assad government. Its full name is Harakat Hazzm, which in Arabic means Movement of Steadfastness. It had been receiving what it described as small amounts of military aid from countries opposed to Assad, and some of that aid included anti-tank missiles made in the United States.

Last November, the US decided to withdraw its weapons support for Hazzm and other “moderate” rebel groups in northern Syria after they were overrun by a group backed by al-Qaeda in the Idlib province.  At the time the US Defense Department said it was “currently not working” with Hazzm. At a congressional hearing last week, Defense Secretary Chuck Hagel said that it was still the US’s “longer term effort to train and equip credible, moderate Syrian opposition forces,” but in southern Syria and away from Islamist strongholds in the north.

Twitter/Aron Lund
Levant Front Tweets U.S.-backed Group Joins Them
“We appeal to our brothers in all factions to solve their differences with the (Hazzm) movement through the Jabhat al-Shamiyya leadership and its judiciary office by appealing to the sharia law of God," the Levant Front posted on Twitter.

The Hazzm group had been under increasing pressure to join the Levant Front and was subject to attacks by the Front’s coalition. Last week, the al-Nusra Front fighters attached Hazzm fighters in western Aleppo, killing four of them, and the al-Nusra Front has accused Hazzm of detaining two fighters. At the same time, Ahrar al-Sham, a group linked to Nusra, said it had taken over two Hazzm bases, including one near the Syrian-Turkish border.

This is happening at the same time that the Syrian government is promising to rid the country of all insurgents. In a Sunday speech in parliament, Syrian Prime Minister Wael al-Halqi vowed that the government would “evict all terrorists from its land” and Damascus would support “any initiatives against global terrorism.”

The Levant Front comes out of efforts to bring all the factions together that had previously fought one another and weakened the rebellion against the Assad government.

Hazzm was one of the few remaining non-jihadist groups opposed to the Assad government in northern Syria. It was created in January of last year and has ties with the Free Syrian Army.  So-called "moderate" fighters like Hazzm control only a fraction of northern Syria, with hardliners taking most of that part of the country and have pushed into other parts of Syria. Self-proclaimed Islamic State or ISIL alone controls a third of the entire country.

Aleppo is the largest city in Syria and has seen some of the fiercest fighting and bombings since the civil war began in 2011, and is considered as one of the most significant last fronts for non-jihadist forces in the country's north.

More than 200,000 deaths are linked to the Syrian conflict that began nearly four years ago.