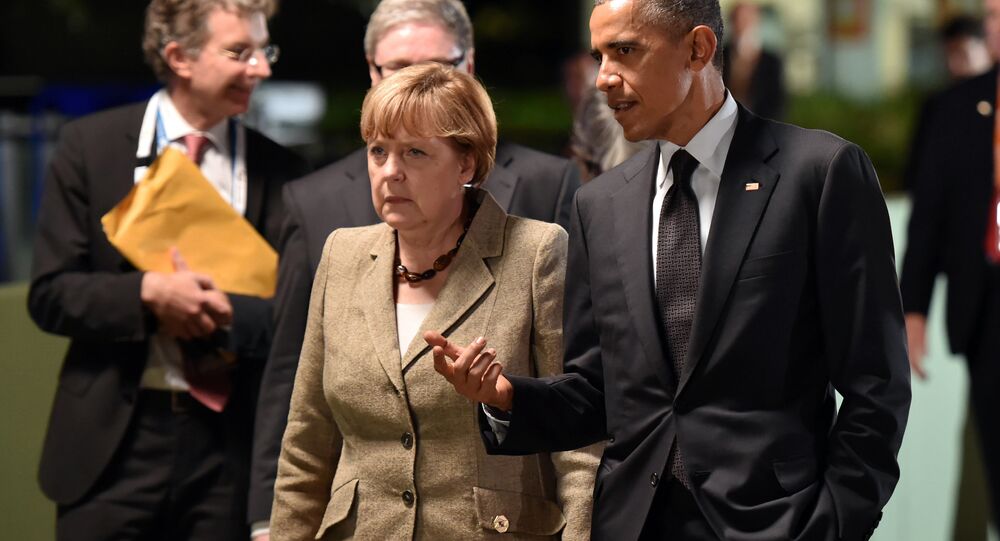 For months, the United States has been supplying non-lethal aid to Ukrainian forces. But a number of officials have urged for that support to include lethal assistance, and with German Chancellor Merkel visiting Washington next week, those talks will be on the table.

WASHINGTON, February 2nd (Sputnik) — After heavy losses suffered by the Ukrainian army at the hands of anti-Kiev rebels in the country's east, the Obama administration considers supplying government forces with sophisticated armament, hoping to change momentum in the bloody civil war.

A White House administration official, speaking on condition of anonymity to the New York Times, has indicated that President Obama may be willing to approve the shipment of lethal aid to the Ukrainian government. Caches of weapons would include anti-armor missiles, artillery radars, armored vehicles and other sophisticated military hardware.

So far, official US support has been limited to tactical supplies like gas masks, night-vision goggles, body armor, and first aid. But now Washington fears that the Ukrainian army may disintegrate without support from abroad. However, before making any new policy decisions, President Obama wants to discuss the issue with European leaders, first being German Chancellor Angela Merkel, who arrives in Washington next week.

Merkel has been coordinating European efforts to reach a cease-fire in Ukraine, often taking a hardline position towards Russia for its alleged involvement in the crisis. But on Monday this week, Merkel reiterated her previous position that Germany will not supply Ukraine with weapons, preferring to focus on diplomacy to end the conflict.

“It is my firm belief that this conflict cannot be solved militarily,” Merkel said at the press conference with Hungarian Prime Minister Viktor Orban in Budapest.

The Obama administration on its part also has concerns about arming the Ukrainians. First, it is unclear if the Kiev forces can operate the kind of high-powered weaponry America would be supplying without training.

The US also accuses Russia of arming Ukrainian separatists, and the White House is doubtful that any amount of lethal support could match the Russian military might. Fears of engaging in a Cold War-era proxy war are causing US officials to move cautiously.

Nevertheless, according to the New York Times, several key administration officials have expressed support in reconsidering US policy towards arming Ukraine. Secretary of State John Kerry, who will be visiting Kiev on Thursday, has shown that he is open to the lethal aid idea, as is Chairman of the Joint Chiefs of Staff Martin E. Dempsey, and outgoing Defense Secretary Chuck Hagel.

A report released on Monday by eight former senior US officials also urges the Obama administration to send $3 billion worth of defensive equipment to the Ukrainian army, including armored Humvees and reconnaissance drones.

“The West needs to bolster deterrence in Ukraine by raising the risks and costs to Russia of any renewed major offensive,” the report reads. “That requires providing direct military assistance – in far larger amounts than provided to date and including lethal defensive arms.”

In the past, Russia has warned Washington not to send lethal supplies into Ukraine, and that doing so would be a “very serious signal.”

“We heard repeated confirmations from the [US] administration, that it only supplies non-lethal aid to Ukraine,” a Russian Foreign Ministry spokesperson said in November. “If there is a change in this policy, then we are talking about a serious destabilizing factor which could seriously affect the balance of power in the region.”