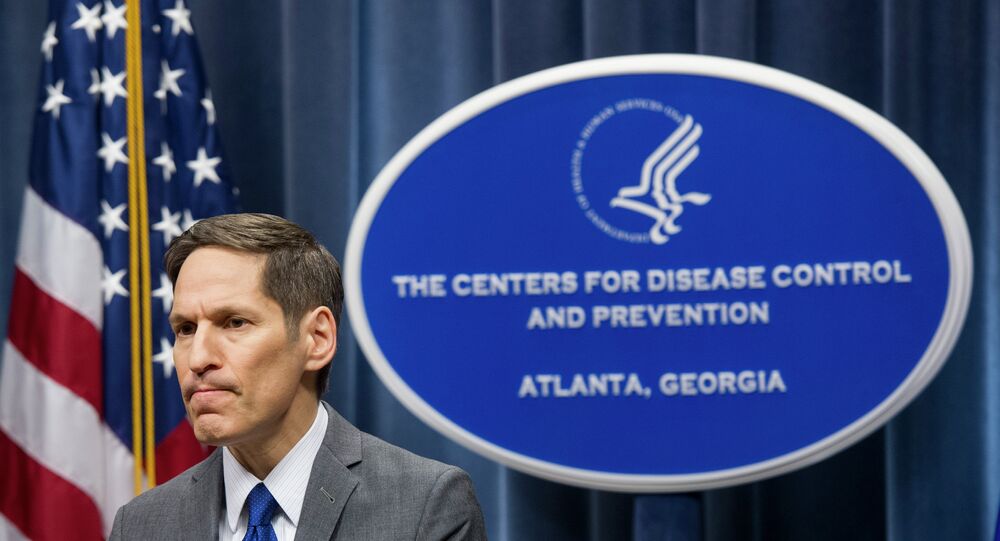 The measles outbreak may spread across the US since a large number of people have not been vaccinated against the virus.

WASHINGTON, February 2 (Sputnik) —The Centers for Disease Control and Prevention (CDC) fears that the measles outbreak will spread across the US since a large number of people have not been vaccinated against the virus.

“We are very concerned by the growing number of people who are susceptible to measles, and the possibility that we could have a large outbreak in this country as a result,” CDC Director Tom Frieden said on CBS’s “Face The Nation” on Sunday.

© AP Photo / Charlie Riedel
Arizona Tries to Curb Measles Outbreak Ahead of Super Bowl
Frieden’s warning comes amid an outbreak that has affected over a 100 people in the US since December.

Health officials believe the outburst is linked to the growing number of unvaccinated people in the US with many parents opting out of vaccinations due to concerns about a possible link between the vaccine and autism, a claim debunked by scientists. Others believe the disease has been eradicated.

Frieden confirmed that the disease still exists and warned that those who have not been vaccinated put everyone around them at risk of contracting the disease.

“What we’ve seen is, as over the last few years, a small but growing number of people, have not been vaccinated. That number is building up among young adults in society, and that makes us vulnerable," he said. “And for those parents that may think that measles is gone, it’s still here, and it can be quite serious.”

The Director also stressed that vaccination is safe and would be the best way to prevent the spreading.

“One in six kids could have a fever ten days after, but the vaccine is safe and effective,” he said on ABC’s “This Week” on Sunday. “We’ve had over one billion vaccines given and study after study has shown that there are no negative long-term consequences. It’s a serious disease and it would be terrible if we have preventable illness, even death, from this disease that’s preventable with a safe and effective vaccine.”

© AP Photo / Jae C. Hong
Disneyland Measles Outbreak Now Infecting People Outside California
Frieden also urged parents to vaccinate their kids to save them and others from what could be a deadly disease.

“What you do for your own kids doesn't just affect your family. It affects other families as well,” he said. “The more kids who are not vaccinated, the more they're at risk and the more they put their neighbors' kids at risk as well.”

Since the outbreak began in Disneyland Parks around Christmas time, 102 cases have been reported in 14 states, reports the CDC.

Health officials are working hard to identify those with measles and isolate them to contain the spreading.

Arizona Tries to Curb Measles Outbreak Ahead of Super Bowl