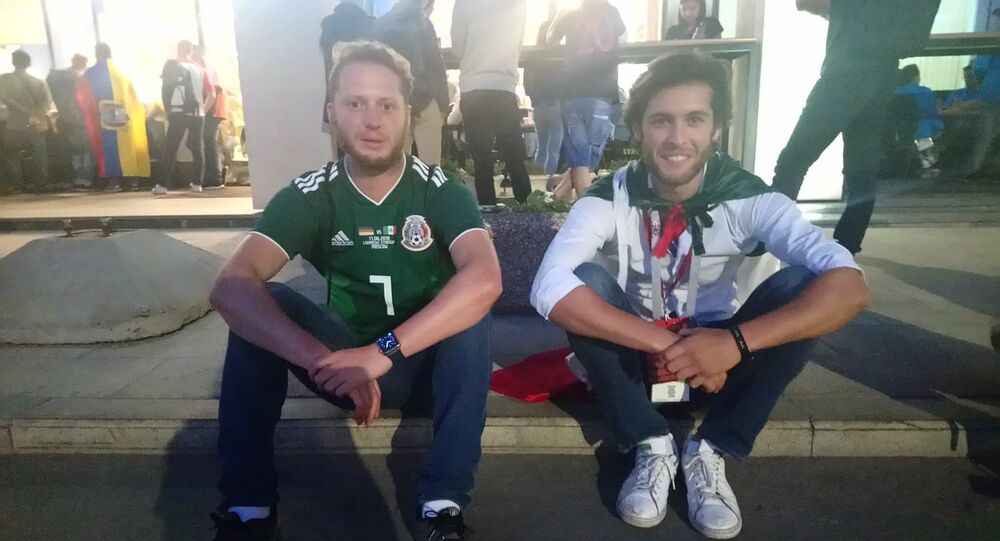 Mexican Fans Who Were Robbed on Game Night: 'It Won’t Spoil the Tournament'

Tickets for the Croatia vs England semi-final match were highly coveted. So much so, that scam artists are taking advantage of people that really, really wanted to see the game.

Santiago and Oscar have traveled all the way from Mexico City to witness the World Cup Championships first hand. They arrived full of hope, to follow Mexico on their journey. When their team was knocked out by Brazil, they stuck around in Moscow, for a chance to witness the end of the tournament. Desperate to see the semi’s in the flesh, the boys thought they had struck gold when they found two tickets outside the stadium grounds. To strike said ‘gold’, they had to fork out quite a lot of hard-earned cash.

Oscar and Santiago would not admit how much they spent on their tickets, but they said "it was a lot. A real lot."

READ MORE: Tunes of the Tournament: 'Football's Coming Home' and Beyond

At half-time, Santiago, and a teary-eyed Oscar are sitting outside the stadium, absolutely gutted. "We have been robbed," they say, and from the cracks in their voices, it is clear they’re not lying. The tickets they had bought were stolen.

"We arrived at the gate, only to be told that are tickets were blocked. They had been stolen from the owners, who called up and cancelled them."

It is illegal to buy second-hand tickets for the matches, but even so, it is common practice to buy and sell them outside the stadium. They are not cheap, and punters can expect to reach deep into their pockets before a sale is made. Tickets for the Semi-finals were being sold by scalpers for up to $1,200 on the grounds. Even at halftime, scalpers were offering to sell the left-overs for $600.

"It’s a shame because the guys at the gate knew that we had not stolen the tickets, but they were not sympathetic at all, they did not try to help us. We also told the police, but they said there was nothing they could do."

© Sputnik / Ramil Sitdikov
Football Fans Around the World Watching England-Croatia Match
The Russian authorities have done their best to prevent counter-sales, threatening fines of up to $22,000 for touts selling knock-off tickets. Police patrol the grounds outside the stadium before matches to look for any suspicious behavior. Nevertheless, crafty scalpers always seem to find a way. When it goes wrong for the buyer, the general line from authorities is: ‘You had been warned.’

Despite their blatant devastation at being ‘mugged’ at the gates, Santiago said that the incident would not ruin their tournament. "It has been a great time, we have had so much fun in Russia, and we will not let such a thing spoil the whole experience." With that, the boys broke into a tearful rendition of Bob Marley’s ‘Everything’s Gonna be Alright’.

They then returned to the café that sits outside the stadium, jam-packed with fans in a similar situation, ticketless and a little glum. Everyone in the little café was desperately trying to witness a little piece of the action unfolding in the stadium — not 200 meters away.

Check out these fans, come all the way to Moscow, 200 metres from Luzhniki Stadium, just to watch the game on a little TV with no volume. Watch till the end! #CROENG #WorldCup pic.twitter.com/yrObWQZtZZ