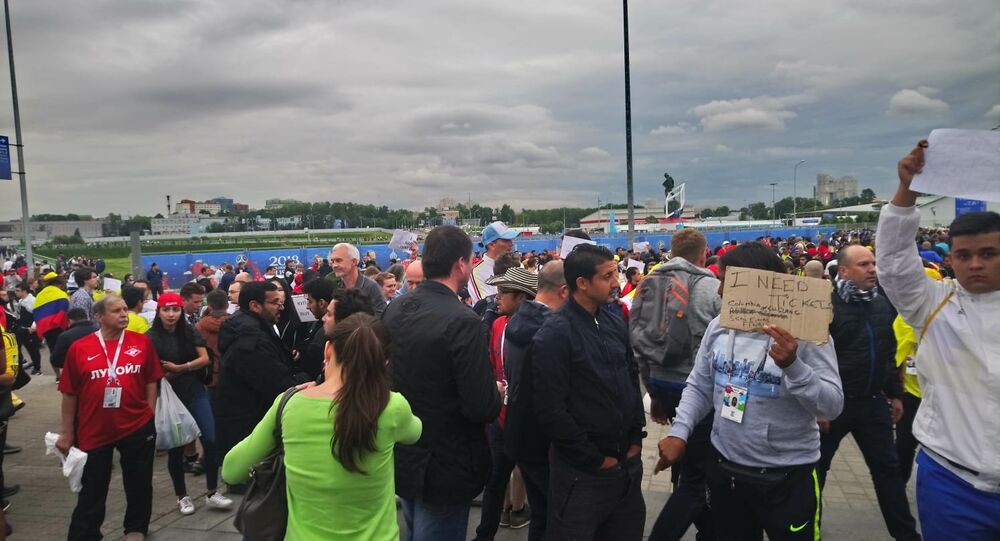 England has beaten Colombia by a nerve-rackingly narrow margin to secure a spot in the World Cup quarterfinals. But inside Spartak Stadium, the majority of the revelers were crestfallen by the outcome.

After Eric Dier scored his team's final unexpected penalty, instead of erupting, Spartak Stadium was wrapped in a disappointed hush; not because the England fans weren't happy, but because they were significantly outnumbered by Colombian supporters in the stands.

Edward Walters is a plumber from Walsall. He traveled all the way to Russia to see the Colombia-England match and was hoping to celebrate the win with his fellow England fans in the stands. Instead, Walters reckons there were "ten Colombian's to every one England fan." He sat behind the goal where the penalties were taken during the shootout, saying that there were "only about six England fans to chant with." That's not to say that England fans weren't there. Some were at other end of the stadium, but many of them were outside with cardboard signs, hunting desperately for tickets. A tricky game to play, given the illegality of ticket touting and sheer quantity of Colombians and Englishmen looking to purchase second-hand tickets.

Why were the England fans so unprepared?

Craig Luke and his mate Adam from Liverpool, have a very simple answer: "Because we're stupid!" They're putting themselves down, as the pair are also very spontaneous.

"We only planned to come to Russia yesterday morning at ten o'clock. We bought a ticket for the Belgium game against Switzerland. We didn't see that game, because we were on the plane when the game was on. We thought we'd be able to get a ticket outside the grounds. We'll be able to get them later in the tournament, but for this game, the whole place is just full of Colombians. They've got all the tickets."

England are usually very well represented in the World Cup tournaments. This year has been different. The crowd outside the stadium was a sea of yellow, with the Colombian stripes dominating the color scheme. A few rogue, white-shirted England fans tried to hype up their side of the match. Of all the England fans at Spartak, perhaps the best dressed of them all was Derrek, from Barnsely, who is dressed in full (polyester) armor, channeling his inner St. George.

"Unfortunately, the security guards confiscated my sword, otherwise I would be here knighting people."

Derrek and his three friends have been to all the England matches so far in the tournament. They had their tickets pocketed from the moment the draw was made. They seemed rather angered by the sorry representation of England supporters, but they said that it's not the fault of the English fans.

"The media spent two years putting all the England fans off going to Russia. That, and the government scared ‘em off with all the propaganda, saying this is an unsafe country. It's not an unsafe country. We're not in the suburbs, or the ghetto, we are in the middle of a well-developed city."

To Derrek, the experience of city-hopping through Russia has only cemented the theory that "the stuff we were told was not much more than just lies," and people at home in England are starting to jump onto his bandwagon. That's why Adam and Craig Luke made the spontaneous decision to travel to Russia and try their luck for tickets outside the stadium. They weren't the only ones. While some of hopeful fans gave up on the ticket hunt early on, traipsing off to watch the match in a bar, others (Craig and Adam included), managed to find tickets.

© REUTERS / Matthew Childs
Patriotic, or Crazy? – England’s Now Fourth Favorite to Win the World Cup
At least one man was a little less fortunate. He was observed purchasing an extortionate $600 ticket from a ticket tout, but his bad luck didn't end with being ripped off: walking toward the stadium with a big grin plastered onto his face, he was approached by an undercover policeman. The smile instantly disappeared from his face as the policeman revealed his badge, tore his ticket in half and dragged him away. Six hundred dollars down the drain and World Cup dreams shattered in an instant.

Turning up to the tournament without a game plan is a risky business, but in order for the England team to be properly represented in Russia, some kind of spontaneity is required. For those wishing to celebrate England's win among other like-minded revelers, perhaps a pub in the homeland is the best bet after all.