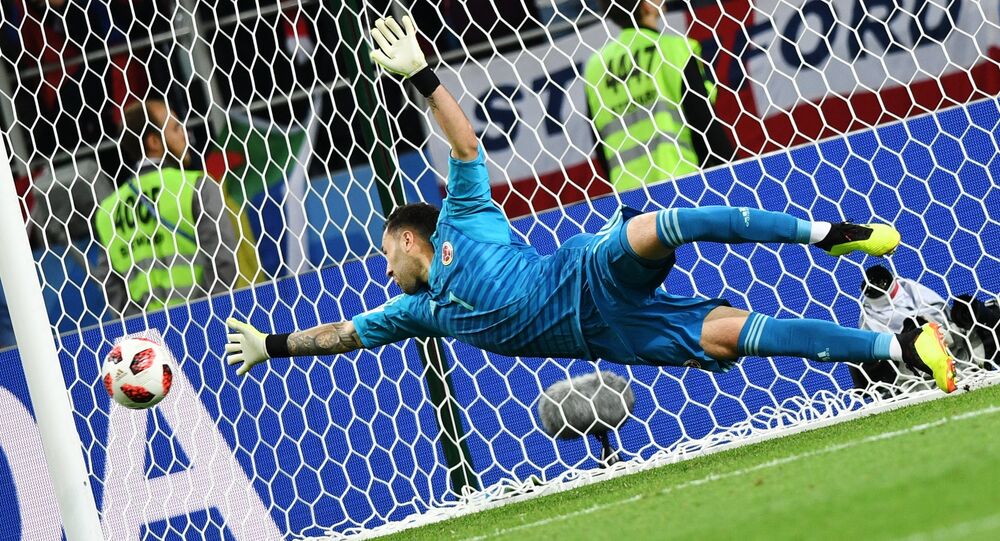 England beat Colombia 4-3 on penalties in 2018 FIFA World Cup round of 16 in Moscow on Tuesday, after the teams drew 1-1 in extra time.

After goalless first half, referee Mark Geiger booked Colombia midfielder Carlos Sanchez for hauling down England captain Harry Kane, who opened the scoring in the 57th minute by converting the resulting penalty.

England captain Harry Kane scored his sixth goal of the World Cup in a penalty in the 57th minute in the second half after Colombia's Sanchez picked Kane up at the back post.

Colombia's defender Yerry Mina scored with a powerful header from a corner in the stoppage time. Mina leapt above Maguire and headed the ball down into the ground to lead his team into the extra time.

There were no more goals in the extra time with the match heading to penalties.

Harry Kane and Dele Alli have been named in the starting lineup for England in their World Cup round of 16 match against Colombia. Alli made his first appearance since sustaining a minor thigh injury during his England's 2-1 victory over Tunisia in their first World Cup match on June 18.

Colombia James Rodriguez, who suffered an injury in the final match of the group stage against Senegal and was substituted in the 32nd minute of Colombia's last group-stage game against Senegal, has missed the game.

During the shootout, England goalkeeper Jordan Pickford made two saves from the spot before his teammate Eric Dier clinched victory.

England forward and captain Harry Kane has been named the Man of the Match after the round of 16 game against Colombia on Tuesday.Three Lions will now face Sweden at the Cosmos Arena in Samara on Saturday.

Four group-stage matches were played at the Spartak Stadium in June. The Spartak Arena hosted its last 2018 FIFA World Cup game of England against Colombia in the round of 16 on Tuesday.

© Sputnik / Anton Denisov
FIFA World Cup 2018, Round of 16, Colombia - England, July 3, Spartak Arena in Moscow
Meanwhile, all of the 2018 FIFA World Cup quarter-final match-ups have been decided on Tuesday.

On Friday, France will take on Uruguay in Nizhny Novgorod and Brazil will play Belgium in Kazan. On Saturday, hosts Russia will face Croatia in Sochi and Sweden will play against England in Samara.

The four winners will meet in semi-finals in St. Petersburg and Moscow on July 10 and 11 respectively, with the third place play off set to take place in St. Petersburg on July 14 and the final at Moscow's Luzhniki Stadium on July 15. The 2018 FIFA World Cup kicked off on June 14 and will continue until July 15, with the games being played across 11 Russian cities.