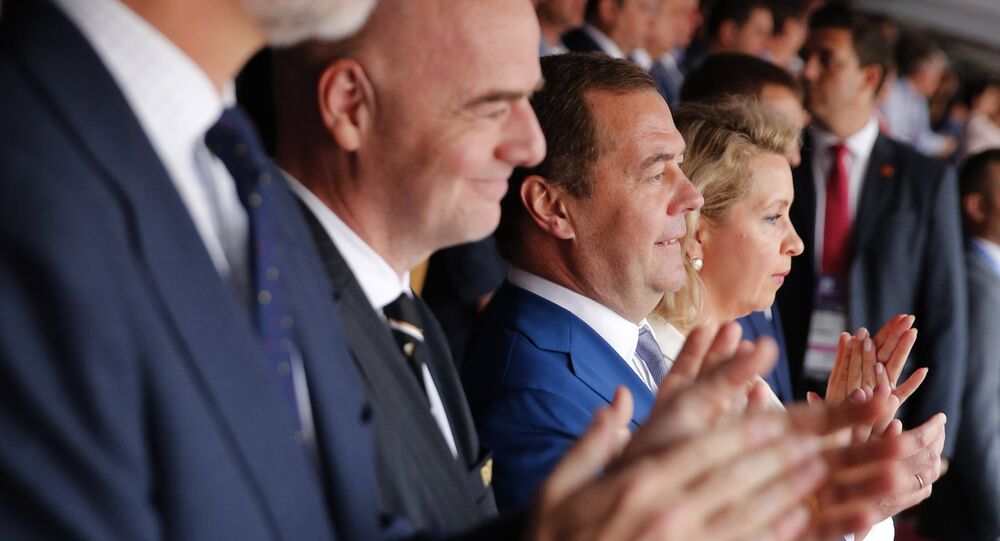 Russia has won its round of 16 match against Spain by winning the penalty shootout 4-3 due to two saves by goalkeeper Igor Akinfeev, making it to quarterfinals for the first time in modern Russia's history.

"Just like the whole country, Putin was watching the game… and rooting for our side. Before the match… the president called the head coach and wished him success in the upcoming game, he also said that… our guys had already done the impossible by reaching the knockout stage… Putin said that nobody would criticize them anyway," Peskov said.

He added that Putin called Cherchesov after the game to congratulate him and the team.

"Putin said that the result was what mattered most in sports… He wished Cherchesov and all the members of the team, success in their next game," Peskov said.

The Kremlin spokesman added that Putin failed to attend the match because of his tight schedule.

"Our team are in the quarterfinals. They did great!" Medvedev posted on Facebook.

Russia’s win on penalties over Spain in World Cup round of 16 on Sunday was a well deserved one, Russian Sports Minister Pavel Kolobkov told Sputnik.

"It is an unforgettable match! It was a difficult game, such an emotional battle, especially in extra time. But we believed in our team, and they met our expectations, they won on penalties, deservedly," Kolobkov said, adding that the day has already become a historical one for the Russian football.

The Honorary President of the Russian Olympic Committee Alexander Zhukov underlined Akinfeev's role. Russia goalkeeper and captain Akinfeev was named the man of the match as he saved two penalties for his side.

"An amazing victory that only a few people expected. Of course, our guys did their best on the pitch. Akinfeev's ability and the team's dedication brought us this victory," Zhukov said.

© Sputnik / Alexei Kudenko
Russia's players celebrate team's victory at the World Cup Round of 16 soccer match between Spain and Russia at the Luzhniki stadium in Moscow, Russia, July 1, 2018

In the quarter-final game, Russia will face either Denmark or Croatia.