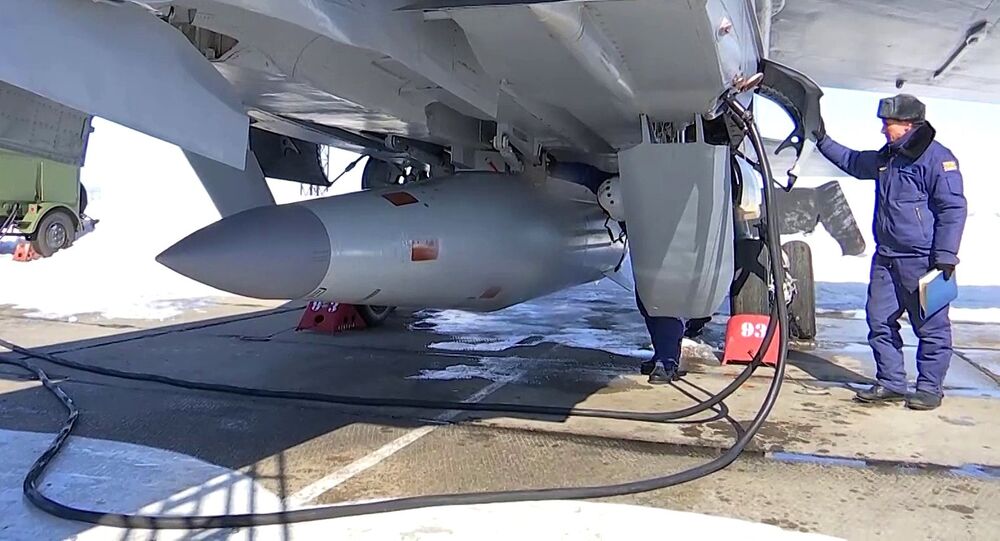 The US is working on at least eight separate hypersonic missile programmes, but has yet to produce an operational weapon. Russia and China received their first hypersonic systems in late 2017 and late 2019, respectively. Russian military planners view hypersonics as a guarantee of Moscow’s ability to respond to a surprise enemy first strike.

US decision-makers should be concerned by the pace of the development of Russia and China’s hypersonic capabilities, and by the Pentagon’s difficulties in catching up to their prospective adversaries in this area, a new update to the Congressional Research Service’s primer on hypersonic weapons has determined.

The document, compiled by an agency responsible for briefing US lawmakers on military affairs and other matters, points out that Russia and China have already “likely fielded operational hypersonic glide vehicles –potentially armed with nuclear warheads,” while US hypersonic programmes “are not being designed for use with a nuclear warhead” and are nowhere near reaching operational status.

The document cites the congressional testimony of Michael Griffin, a former undersecretary of defence for research and engineering, who briefed lawmakers and told them that the US does not yet “have systems which can hold [China and Russia] at risk in a corresponding manner,” and doesn’t “have defences against [their] systems.”

Spending Bonanza Leaves Something to Be Desired

The report goes on to indicate that the current US military budget includes $3.2 billion in outlays for hypersonic weapons research, while the request for fiscal year 2022 request an additional $600 million. On top of that, the Missile Defence Agency has made a separate request for $247.9 million for hypersonic defence. The Pentagon has not yet “established any programmes of record for hypersonic weapons,” nor made “a decision to acquire” such arms, the paper adds. Instead, the military has opted to continue to formulate and evaluate prototypes, system concepts and mission sets.

Among these projects, only the CHGB is anywhere close to operational capability, with the Army announcing earlier this year that it expects to begin fielding the weapon with a unit by September.

However, the Congressional Research Service gives a more pessimistic estimate on the timeframe for the appearance of US-made hypersonics, concluding that the Pentagon is “unlikely to field an operational system before 2023,” notwithstanding the prioritization of hypersonics R&D in successive budgets. The report justifies the delay by repeating several times over that US hypersonic weapons are to be conventionally armed, making accuracy and technical acuity more important than for potentially nuclear-armed Russian or Chinese systems.

© Photo : Ministry of Defence of the Russia Federation
Putin: Russia Was Forced to Create Hypersonic Weapons After US Withdrew From Missile Treaty
Delving into recent history, the document also makes a surprise admission that US policy is responsible for Russia’s push to create hypersonic systems. The report points out that “although Russia has conducted research on hypersonic weapons technology since the 1980s, it accelerated its efforts in response to US missile defence deployments in both the United States and Europe, and in response to the US withdrawal from the Anti-Ballistic Missile Treaty in 2001.”
© AFP 2021 / TIM SLOAN
US President George W. Bush (R) looks on as Russian President Vladimir Putin (C) signs 24 May 2002 in St. Catherine's Room, the Kremlin in Moscow, Russia what the White House calls "the Treaty of Moscow", a 10-year treaty binding the nations to reduce their nuclear stockpiles by about two-thirds - to a range of 1,700 to 2,200

China, meanwhile, is assumed to have deployed the DF-ZF – a hypersonic glide vehicle, by early 2020, having tested it at least nine times since 2014, according to US intelligence.

The research report complains about a lack of clearly defined missions for hypersonic weapons by the Pentagon, which it says makes it difficult for the military to balance the considerations of R&D, production and deployment. It also points to certain “strategic implications” of the new type of weapon, particularly its short flight time, “which, in turn, compresses the timeline for response,” as well as uncertainties related to hypersonics’ maneuverability.

Citing a United Nations assessment, the report concludes that hypersonics could be seen as a strategic weapon, even if they are conventionally armed, and may result in the use of nuclear weapons by an adversary. The Congressional Research Service therefore recommends adding such weapons in new international arms control treaties.

Russian government officials and military planners have stressed repeatedly that their strategic doctrine is aimed at preventing aggression, including in form of the concept of a ‘Prompt Global Strike’ – i.e. a massed precision-guided conventional enemy first strike meant to decapitate Moscow’s defences and nuclear response capability. Russia’s nuclear doctrine commits the country not to be the first to use nuclear weapons, but also reserves Moscow the right to retaliate with nukes in response to conventional aggression so severe it threatens the survival of the state.