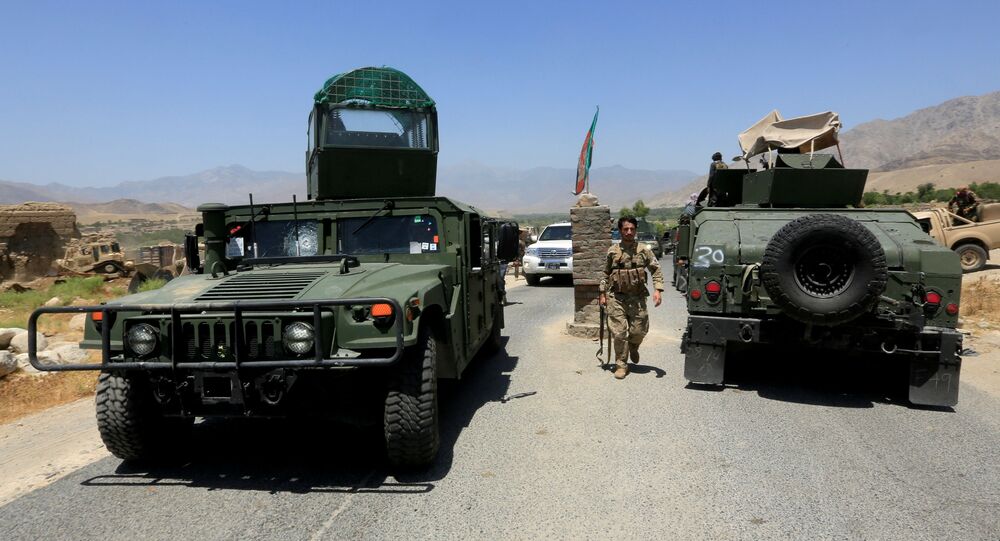 Afghanistan’s neighbours have beefed up security along their respective borders with the war-torn nation in recent weeks amid the Taliban’s* dramatic takeover of wide swathes of the country and the mass surrender or desertion of pro-government forces in the wake of the ongoing US and NATO withdrawal.

US intelligence is concerned at the pace of the Taliban’s “accelerating’ advance, fearing the group might seek to starve the Kabul government, multiple sources said to be briefed on the matter have told CNN.

The Islamist militants’ ongoing offensive is “accelerating at an accelerating pace,” one congressional source said to have knowledge of the intelligence indicated.

Several sources said Kabul province is not thought to be at risk of falling, for now, due to the limited resources the Taliban has available to mount such an operation, and to the perceived threat of US retaliatory airstrikes in support of the Afghan security forces.

The intelligence assessment also reportedly warned that the militants could ‘choke off’ the government’s import supply lines ‘if they choose to do so’, or redirect resources from trade as they continue to capture border checkpoints. However, one source indicated that the Taliban has so far kept major border crossings it has control over open, enabling them to collect import-export fees from trade.

Another source said that the Afghan government considers the seizure of border crossings as a major threat, and that it was creating special military units to try to protect them amid a tendency by regular troops and border guards to flee at the first sign of a Taliban advance.

© REUTERS / STRINGER
Pakistan's Intel Chief Brushes Away Afghanistan's Claims of Providing Air Support to Taliban
Last week, Sputnik reported on the Taliban’s seizure of hundreds of Afghan security forces vehicles, including Humvees and other light trucks, heavy artillery systems, mortars, anti-aircraft guns, bulldozers, excavators and more. US media have warned that the militant group could use the captured vehicles to create a major mobile fighting force if it is able to source fuel for them.

One of CNN’s sources suggested that the Taliban “might not even have to take the risk of establishing battle positions around Kabul,” and “might only need to move in, when they’re closer to thinking that victory is assured.” Other officials expressed fears that the US may not be able to learn fast enough that the Taliban is getting ready to advance into the capital due to a lack of intelligence on the ground.

The outlet also confirmed that contingency plans and resources exist for a ‘Saigon moment’ – i.e. the need for a rapid evacuation of Kabul in case of an unexpected Taliban advance akin to the 1975 offensive by communist forces in South Vietnam which forced the US to evacuate tens of thousands of military personnel and refugees, bringing a humiliating end to the US war in Vietnam. The Biden administration has vowed to prevent a repeat of such a scenario.

© AP Photo / Massoud Hossaini
DoD ‘Deeply Concerned’ by Speed of Taliban’s Advance, ‘Briskly’ Looking for Bases Near Afghanistan
The Taliban’s dramatic offensive against government forces began this spring, in the aftermath of President Joe Biden’s announcement in April that the US would leave the war-torn country by the 20th anniversary of the 9/11 terror attacks – which served as a pretext for the 2001 invasion of Afghanistan by US and NATO forces. The withdrawal deadline has since been moved up to the end of August.

Afghanistan shares a border with Iran to its west, Turkmenistan, Uzbekistan and Tajikistan to its north, China to its east and Pakistan to its south. All of these countries have beefed up security along the border to try to prevent unrest from spilling over into their own countries. Russia has promised to “act decisively” to protect its Tajik allies within the Collective Security Treaty Organization. A Taliban delegation visited Moscow last week, promising not to allow provocations with their neighbours, and vowing to keep Daesh (ISIS)* out of territories under their control.