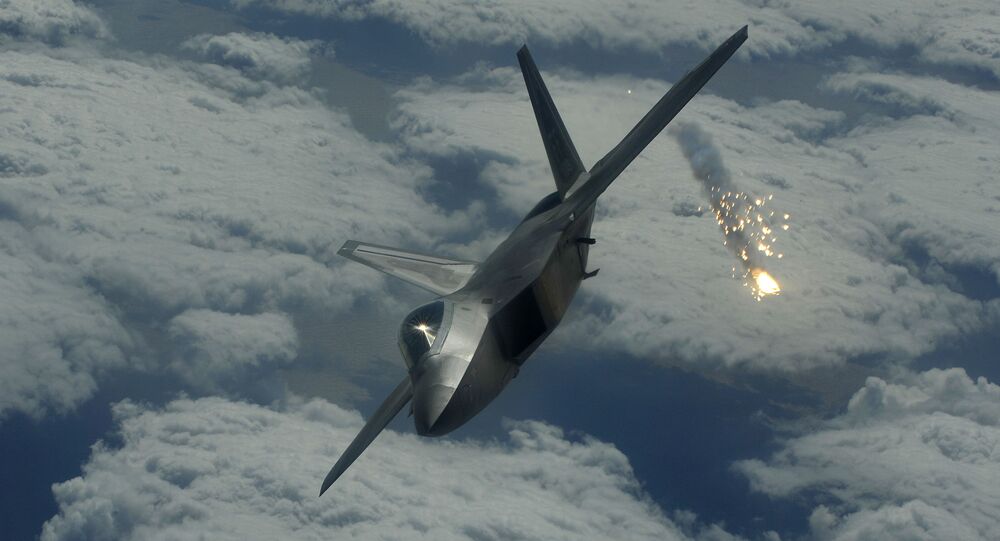 US Pacific Air Forces (PACAF) announced this week that more than 35 aircraft and over 800 Indo-Pacific Command airmen will take part in Operation Pacific Iron 2021 this month. The mission comes in support of the 2018 National Defense Strategy, which seeks in part to counter China's "predatory economics" and militarization of the South China Sea.

PACAF Commander Gen. Ken Wilsbach teased on Thursday that the upcoming operation in Guam and the Tinian islands will come as a historic first for fifth-generation fighter jets with the US Indo-Pacific Command's air service.

"We have never had this many [F-22] Raptors deployed together in the Pacific Air Forces area of operations," he revealed to CNN.

Later this month, at least 25 F-22s assigned to the Hawaii Air National Guard are set to travel from Alaska's Joint Base Elmendorf-Richardson, to the islands of Guam and Tinian, according to a PACAF announcement issued this week.

While China has 20 to 24 operational fifth-generation fighter jets, the US has some 180 deployable F-22s, CNN reported, citing Carl Schuster, a Hawaii-based defense analyst and a former director of operations at the Joint Intelligence Center of the US Pacific Command (USPACOM).

"The Pacific Air Force is demonstrating that it can deploy as many or more fifth-generation aircraft into the theater on short notice than [China] currently has in its entire inventory," he said.

Traditionally, six to 12 F-22s make up a deployment, Schuster added.

Retired Air Force Lt. Gen. Dan "Fig" Leaf, a former deputy commander of USPACOM, told the Honolulu Star-Advertiser earlier this week that the historic deployment of more than two dozen F-22 fighter jets appears to be a demonstration of Washington's readiness to the region.

He urged China to heed the US military's "message" in Pacific Iron 2021, which comes in support of the US' 2018 National Defense Strategy.

"I'd take it as a demonstration of the legitimacy of the American commitment to the region, because messaging is one thing when it's just words," he said. "But this is not just a statement, it's an investment in capability because it's not cheap to deploy 25 F-22s from two different bases to the Western Pacific."

Per the PACAF, airmen taking part in the mission will conduct Agile Combat Employment (ACE) operations designed to ensure mission readiness and train airmen to operate with increased capabilities, particularly in less-than-optimal environments.

Airmen participating in the readiness exercises will operate from the Tinian International Airport and three airports on Guam, including Andersen AFB. The service believes the exercises will enhance survivability, as well as its ability to operate from a variety of smaller airfields around the Indo-Pacific region.

US B-52 Bombers Deployed to Indo-Pacific Region

Bicentennial Peoples’ Congress; US in Asia and the Pacific; G20 Ministerial Meeting