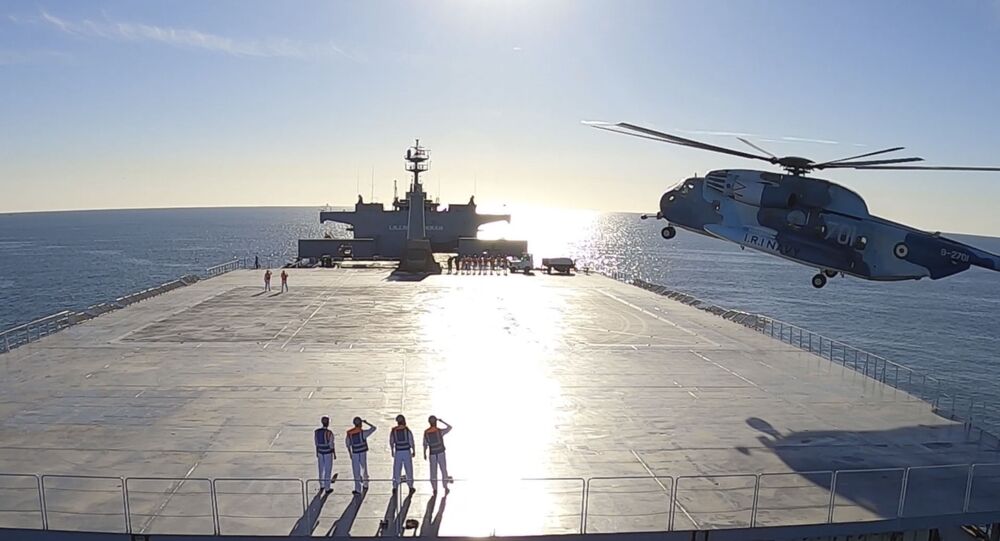 Iran deployed warships to the Atlantic for the first time in the country's history this spring, sparking frantic speculation in US media about where the ships were going and what they might be carrying.

Iran’s Navy is set to take delivery of several new warships, including a domestically-developed missile-launching hovercraft, before the end of the year, Navy commander Rear Admiral Hossein Khanzadi has revealed.

“I have followed the construction plan of this hovercraft step-by-step and the Defence Ministry has promised to deliver this vessel – which is equipped with missiles, to the Navy by December,” Khanzadi said in a televised speech on Saturday, his remarks quoted by Tasnim.

The commander added that other ships, including the Damavand, a Moudge-class destroyer, and the the Konarak, a new warship of an unspecified class, would join the fleet by the fall.

Khanzadi further indicated that an unnamed long-range intelligence ship would go into service in the near future to complement Iran’s fledgling ocean-going capabilities, and said that an Iranian company had recently designed and built a new marine diesel engine for the Navy, expanding its self-sufficiency in this area.

Commenting on Iran’s first-ever deployment of a two-warship flotilla in the Atlantic Ocean this spring, the commander said that the deployment “sends a special message” about Iran’s support for the oppressed of the world.

© Photo : Twitter / @Iran_Military
Flotilla of Venezuela-bound Iranian Ships Has Changed Course, Report Claims Citing US Officials
Iran’s Sahand destroyer and the Makran support vessel set sail for the Atlantic Ocean in May, with US media reporting that the flotilla may be carrying arms to Venezuela and debating whether or not Washington has the legal right to deploy naval assets to try to stop it (turns out they cannot).

“By the way, our flotilla was present on the coast [of Gambia] last week,” Khanzadi said, referring to a recent directive he said had been given by Iranian Supreme Leader Ali Khamenei to deploy Iranian ships off nations like Gambia, from which the US carried African slaves to America centuries ago.

“Of course, part of that presence is because the Americans said Iranians could not be present in the Atlantic,” the commander admitted, suggesting that “the United States is concerned that today, for the first time in Iran’s history, the gates of the Atlantic have been opened to us.”

“The Americans have set up bases around us over the years, and today they are terrified when we are 5,000 km away. This fear is because the presence of Iran breaks the hegemony of the United States,” the rear admiral said.

As for Iran’s maritime borders, Khanzadi stressed that their safety was assured and that it was not possible for any foreign vessel to establish a presence in the area without being monitored by the Iranian military –including its Navy and Air Force drones.

“For Israel to be present in our geography is like a dream and a mirage,” Khanzadi boasted, referring to Tehran’s long-time regional rivalry with Tel Aviv.