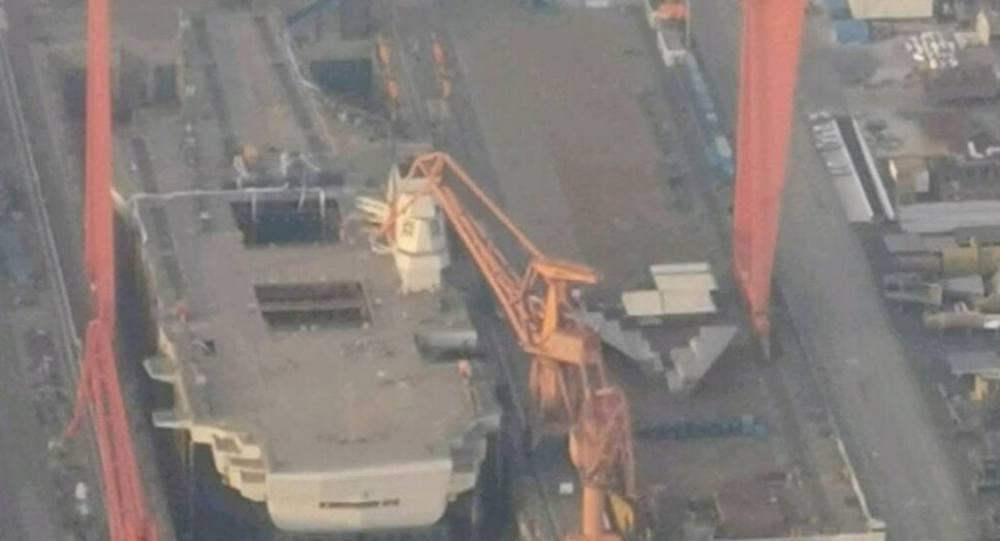 New photos of Jiangnan shipyard in the Chinese port city of Shanghai show that the country’s newest aircraft carrier, the as-yet-unnamed Type 003, is nearing completion after the flight deck and command island were recently installed. The warship is expected to become the world’s largest aircraft carrier outside the US Navy.

The photos show that in recent weeks the carrier’s angled flight deck has been installed above the hull and the distinctive command island has been lowered onto it, giving a broad impression of what the warship’s final appearance and dimensions will be.

The latest images of the Type 003 carrier reveal again some progress and even if some currently ongoing discussions vary on length, width and flight deck area it is in any way as @AlexLuck9 noted "... a healthily sized super carrier!"

So far the two clearest images of the latest progress on the Type 003 aircraft carrier.

​According to Naval News, the Type 003 will be 1,050 feet long, about 43 feet shorter than the US Navy’s newest carrier, the USS Gerald R. Ford, and with a slightly narrower flight deck. However, due to some minor design differences, including having two aircraft elevators instead of three, the Chinese carrier will have a slightly larger flight deck surface area of 209,904.9 square feet (19,500.8 square meters).

However, like the Ford, the Type 003 will launch aircraft using one of three electromagnetic aircraft launch systems (EMALS), giving it the ability to launch larger aircraft with heavier fuel and weapons loads than other Chinese carriers, which use a more reliable, but less flexible method of launching planes off a bow ramp.

Preliminary of course, but certainly within reason that 003's deck area could slightly exceed Nimitz...

​One of those aircraft is anticipated to be revealed soon by Shenyang Aircraft Corporation: a carrier-based fighter provisionally called the J-35 by Western observers, which is believed to be based on the FC-31 Shenyang has been testing for years. A fifth-generation stealth aircraft, the FC-31 is considered broadly comparable to the US military’s F-35 Joint Strike Fighter, two of the three versions of which are capable of operating from aircraft carriers.

However, no formal announcement has yet been made about the so-called J-35, despite the appearance of aircraft models similar to the FC-31 at a carrier mock-up in Wuhan.

Huitong has updated his site with a larger and slightly better image of the alleged J-35 (?) mock-up at the Wuhan carrier mock up.

​More immediately, Shenyang appears to have produced another batch of J-15 “Flying Shark” fighters, a carrier-based jet with a shared ancestry to the J-11B and Russia’s Su-33 fighter. The large aircraft has not reached its full potential flying from China’s two other carriers, Liaoning and Shandong, which use bow ramps.

Both carriers are smaller than the Type 003 and closely related to Russia’s flagship aircraft carrier Admiral Kuznetsov. The PLAN also has one Hainan-class landing helicopter dock in service and two more being finished. The warships resemble aircraft carriers, but carry helicopters and amphibious landing craft.