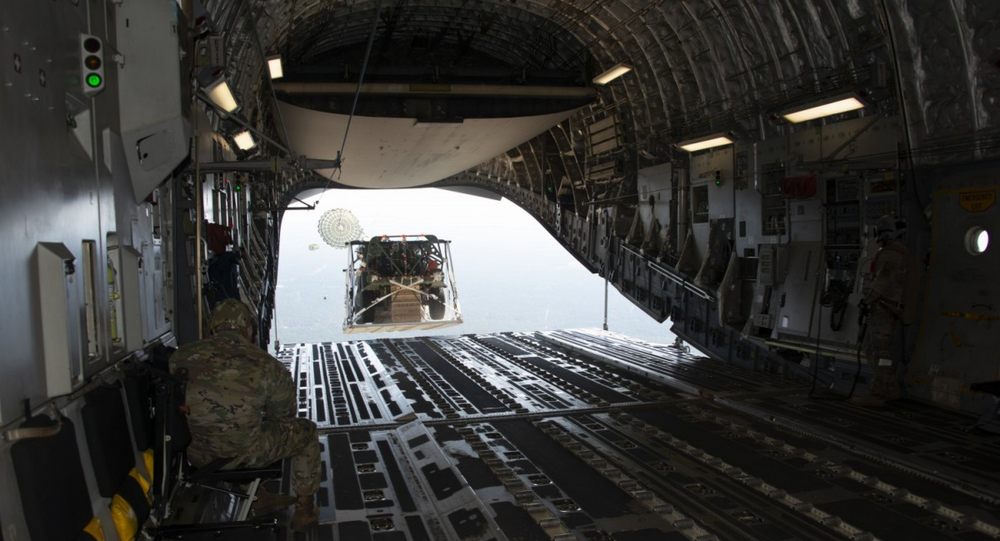 The United States military currently has the means to conduct airdrops of Humvees using C-17 and C-130 transport planes, with the vehicles attached to a platform with honeycomb and sheets of lumber placed between axles and frames for protection. In 2020, the Army awarded General Motors a contract to build a new airdroppable light utility vehicle.

According to an Army news release, the tests were conducted by troops from the 2nd Battalion of the 325th Airborne Infantry Regiment of the 82nd Airborne Division, with the forces involved working with Airborne and Special Operations Test Directorate.

Test officer James Cochran said the airdrop testing, which took place between late March and late June, demonstrated that the vehicle was “effective and suitable for an infantry squad equipped…to perform low-velocity airdrops as well as airdrops utiliSing the dual row airdrop system with the ISV.”

Based on GM’s Chevrolet Colorado ZR2 midsize truck platform, the 5,000 pound ISV has a 3,200 pound (1,500 kg) payload capacity, can carry up to nine crew, and has a 2.8-litre turbo-diesel engine pumping out 275 horsepower. Ninety percent of the vehicle is said to be made of commercially-available parts and it has an automatic transmission.

The Fort Bragg testing was carried out using standard low-velocity drops from C-130 and C-17 planes, with tests said to include use of a standard dual row airdrop system on the C-17.

After landing, troops were said to have de-rigged the ISVs from their landing platforms, loaded up and drove them over both smooth and difficult terrain.

“The ISV will be a game-changer for a rifle squad. The ability to drop this in with the soldiers will give them much greater reach and endurance to complete their mission,” Jordan boasted.

One of the soldiers taking part in testing of the vehicle said the ISV’s similarity to civilian vehicles would help ensure that “training is fluid,” with the vehicle capable of being operated by any soldier in emergency situations. Another praised its “simplistic manoeuvrability” characteristics and low fuel consumption.

The military says the ISV is light enough to be transported by a UH-60 Blackhawk helicopter, or carried in the belly of a CH-57 Chinook.

© Sputnik / Alexey Filippov
Flying Tanks: World's Top Armored Vehicles Unafraid of 'Jumping' Out of Airplanes
A General Motors’ defence subsidiary in North Carolina began construction of a 75,000-square-foot factory to produce the ISV for the military in December 2020. The automaker was awarded a $214.3 million contract for these purposes. The plant is expected to pump out 649 ISVs, with the capacity to produce up to 2,065 total vehicles.
...
Reddit
Google+
Blogger
Pinterest
StumbleUpon
Telegram
WhatsApp
111