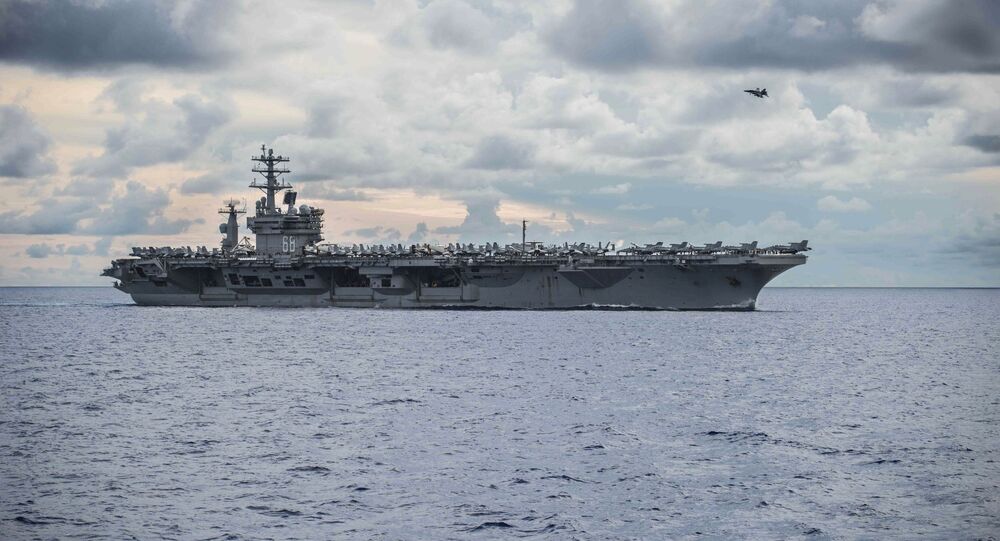 President Biden’s Pentagon has continued its predecessors’ policy of conducting "freedom of navigation" operations in maritime territories claimed by Beijing despite repeated warnings by the Chinese for the US to mind its own business. The FONOPs are just one component in a larger US pressure campaign against the People’s Republic.

The USS Ronald Reagan-led aircraft carrier strike group has entered the South China Sea for “routine” operations to “uphold the freedom of the seas,” the US Navy announced Tuesday.

“While In the South China Sea, the strike group is conducting maritime security operations, which include flight operations with fixed and rotary wing aircraft, maritime strike exercises, and coordinated tactical training between surface and air units,” the Navy said in a statement.

The deployment is said to be the first of its kind this year for the USS Ronald Reagan, which operates out of the US garrison in Japan’s Yokosuka Naval Base.

The carrier and its air wing are accompanied in their mission by a squadron of warships including the USS Shiloh Ticonderoga-class guided-missile cruiser and the USS Halsey Arleigh Burke-class guided missile destroyer.

Rear Admiral Will Pennington, the strike group’s commander, said it was a “privilege and a pleasure” for him to “work alongside our allies, partners, and joint service teammates” in support of the “maritime commons” in South China Sea. The body of water is “pivotal to the free flow of commerce that fuels the economies of those nations committed to international law and rules based order,” he added.

Upwards of $3.5 trillion dollars-worth of global trade, one-third of the world’s crude oil supplies, and half of liquefied natural gas(LNG) deliveries pass through the South China Sea each year.

President Biden’s Pentagon dramatically ramped up its military operations in the South China Sea in recent months, sinking Beijing’s hopes that the new administration would take a more diplomatic tone than its predecessor.

© AP Photo / Rob Griffith
US Flew 72 Reconnaissance Flights Over South China Sea in May, Double Last Year - Think Tank
Last week, a China-affiliated think tank calculated that the US more than doubled its military reconnaissance flights over the South China Sea in May compared to a year ago, from 35 to 72. Also in May, the US Navy denied Chinese reports that an American warship had been “expelled” from the South China Sea after the People’s Liberation Army Navy accused it of illegally sailing into China’s territorial waters.

The US has used its South China Sea FONOPs as way to put pressure on and try to box in Beijing and slow its military and economic rise. Other components of this strategy have included the levelling of claims about alleged human rights abuses in Xinjiang, Tibet and Hong Kong, multi-trillion-dollar trade and tech wars, and US threats to station offensive medium-range ground-based ballistic missiles in the Pacific. In recent months, the Biden administration has sought to shore up its alliances in the region into an anti-Beijing coalition known as the “Quad” and consisting of India, Australia, Japan, and the US.

Xinhua/Yao Dawei
Beijing, Hanoi Agree to Establish Naval Hotline to Resolve Emergencies in South China Sea
The countries neighbouring the South China Sea have disputed the ownership of the maritime territories for decades. Beijing claims ownership of wide swathes of the strategic maritime and trade artery. Parts of the body of water are claimed by Vietnam, Malaysia, Brunei, the Philippines and Taiwan. Regional nations set to work on guidelines to resolving territorial disputes involving the body of water a decade ago, but Obama-era Secretary of State Hillary Clinton’s insistence that the sea is a “matter of US national interest” and subsequent US military operations in the region have hampered these negotiations.

Chinese officials have repeatedly urged the US – which has no formal territorial claims in the South China Sea –to stay out of the dispute and to allow the region’s nations to sort out their differences independently.