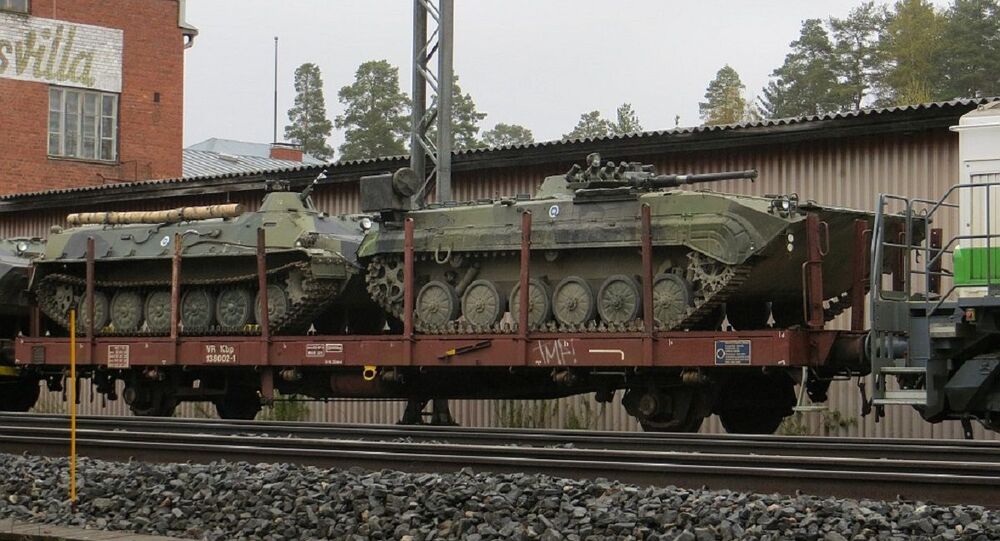 A collision between armoured vehicles weighing 12 to 14 tonnes that left several crewmen with minor injuries has been ascribed to low visibility due to dry terrain and massive dust from sand.

Two tanks collided during a ground forces' training exercise in Pohjankangas near Niinisalo in the southwest of the country, leaving several crewmen injured, the Finnish Armed Forces have announced.

The accident occurred when a BMP-2M infantry fighting vehicle collided with a BMP-1TJJ artillery observation vehicle as the two tanks weighing 12 to 14 tonnes moved on parallel lines in the same direction.

The crews of both vehicles received minor injuries and one crew member was sent to hospital for further examination based on the recommendations of medical staff.

Both tanks suffered minor damage in the course of the collision, yet are still operational.

"Collisions between tanks are really rare", Armoured Brigade Lieutenant Colonel Riku Rantakari told national broadcaster Yle. "At the time of the accident, there were a total of about 15 people in the vehicles. One of them was taken to hospital to rule out the possibility of fractures", he added.

© CC0
Finnish Conscripts' Fitness Conditions 'Worse Than Ever Before'
According to the Finnish Armed Forces, the cause of the collision is being investigated.

"The training area was very dry and it is possible that visibility quickly deteriorated to zero due to sand dust in the air", Rantakari suggested.

According to Rantakari, a thorough briefing was held for those involved in the accident as soon as the drill concluded.

"This is also a matter of vocational and service safety, so we will go through what happened and how to act so that this doesn't happen again", he said.

Two Finnish Air Force Hawk training jets grazed each other mid-air during an exercise in early April. Both planes landed successfully with only scratches on the paint, the Finnish Air Force said at the time. During the drill near the training base at Tikkakoski in central Finland, the two planes were flying in the same direction at the same speed and at close range, a subsequent investigation revealed.

The Air Force Academy's Deputy Head of Training, Lieutenant Colonel Kai Naumanen said mid-air contact between two aircraft is very rare. However, a similar incident occurred in August 2013, when two Hawk jets crashed near the town of Kauhava in western Finland, resulting in the death of one of the pilots.