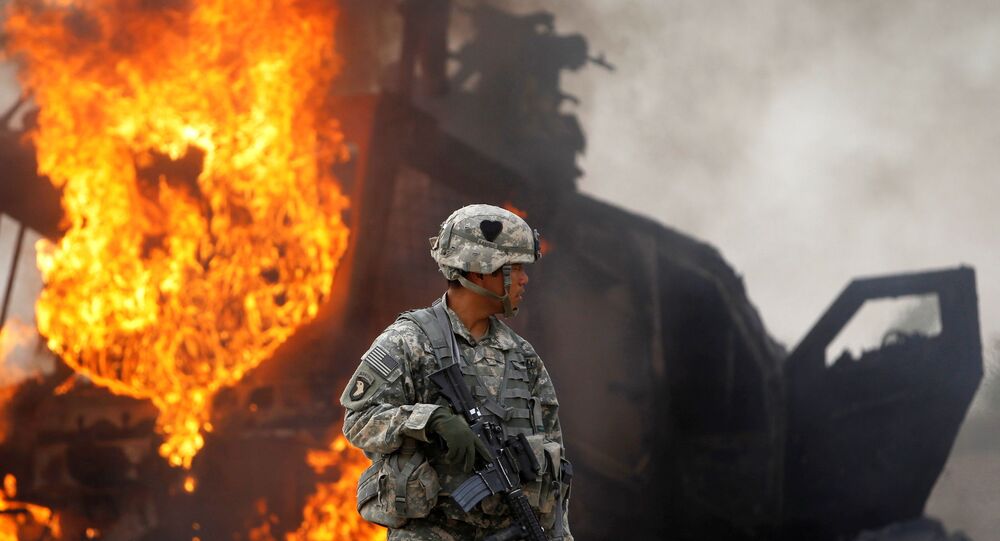 US President Joe Biden announced in April that the withdrawal of American troops in Afghanistan would not be completed by the previously agreed upon May 1 deadline, declaring instead that the forces would be out of the war-torn country by September 11, marking the 20th anniversary of the 9/11 terrorist attacks against the US.

The US military added a “package” of F-18 fighter jets to the security detail offering added muscle to protect US troops who are being withdrawn from Afghanistan, Mark Milley, the chairman of the Joint Chiefs of Staff, said in a Thursday statement.

The announcement, made by Milley during a joint conference with US Defense Secretary Lloyd Austin, revealed that approximately 12 F-18s would be deployed to the region.

The fighter jets are in addition to a previously announced deployment of B-52 bombers and the USS Dwight D. Eisenhower, as well as temporary “elements of an Army Ranger task force.”

The US Central Command, which oversees US operations in the Middle East, has been tasked with assessing the security needs of the ongoing withdrawal procedures.

Acknowledging recent attacks by the Taliban in the Middle Eastern country, Milley stated that there have been no strikes against the US or coalition forces since troops began pulling out of Afghanistan.

Earlier, Pentagon spokesperson John Kirby noted that officials had documented “small harassing attacks” but that they had “not had any significant impact.” Similarly, US Forces Afghanistan reported that “ineffective indirect fire” had been detected at the Kandahar Airfield over the weekend, and that it had been addressed with an airstrike.

Milley stated during the Thursday conference that between 80% and 90% of all airstrikes are being handled by the Afghan air force, adding that providing continued air support to Afghan forces will be “key.”

Additionally, Milley revealed that the US Department of Defense was considering a variety of options to help support Afghan troops once US soldiers are officially withdrawn from Afghanistan. One possibility included training Afghan service members in another country.

"We haven't figured that out 100% yet," Milley acknowledged.

The US Central Command reported on Tuesday that the withdrawal is only between 2% and 6% complete, with officials identifying some 1,300 pieces of equipment to be destroyed and transferring one base to the control of the Afghan military.