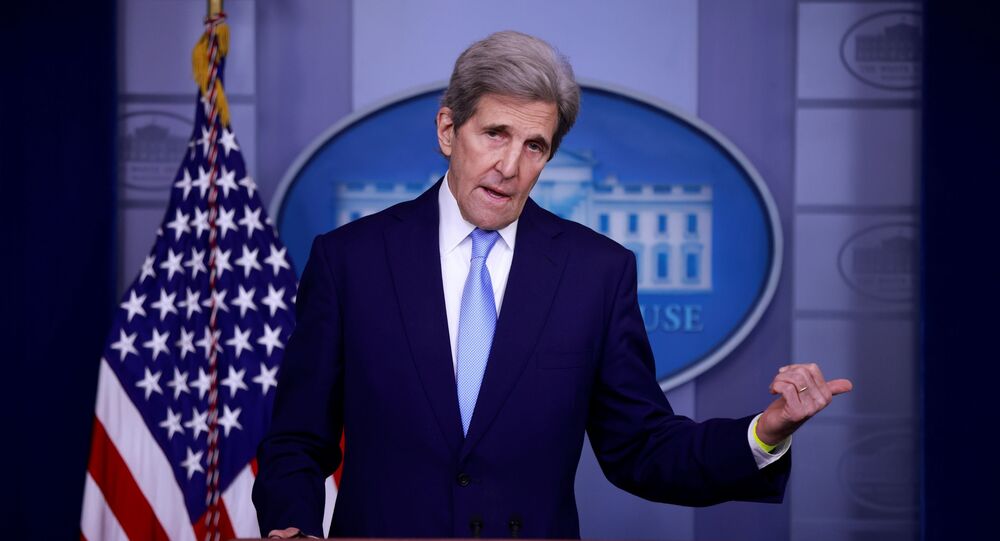 Syria has repeatedly called the international community's attention to the airstrikes reportedly committed by the IDF on its territory. Generally, Tel-Aviv refrains from commenting on these reports. However, its military did acknowledge the Jewish State has been targeting what it says are Iranian-backed militia operating in the Arab Republic.

US Senators Rick Scott and Dan Sullivan have called on US Special envoy for Climate John Kerry to resign over allegedly sharing with Iranian Foreign Minister Javad Zarif what is, according to them, supposed to be classified military intelligence.

Political debate was spurred after an audio tape was leaked on Sunday featuring Iran's top diplomat speaking on the IRGC's role in Iranian politics, which also contained controversial comments about the late Quds Force General Qasem Soleimani, who was killed in a drone strike in Baghdad ordered by the former Trump administration, on January 3, 2020.

It appears that the senators mostly outraged about Kerry disclosing secret intelligence about the Israeli covert airstrikes on Syrian territory, but ignored the fact that the Syrian government has repeatedly protested Israeli attacks as a violation of its sovereignty.

"Why is John Kerry, the “special envoy for climate,” sharing classified intelligence with Iran — the world’s biggest state sponsor of terrorism? Every time John Kerry opens his mouth, our adversaries are emboldened," Sen. Sullivan wrote on Twitter.

New: @SenRickScott has joined @SenDanSullivan in calling on John Kerry to resign if what #Iran's foreign minister said on the Zarif tapes that @IranIntl published are true regarding disclosure of Israeli strikes in #Syria. https://t.co/Oic6mAJ6TO

As criticism rose from other politicians, Kerry took to Twitter to deny the reports, insisting nothing like that happened either when he was head of the State Department or ever since.

I can tell you that this story and these allegations are unequivocally false. This never happened - either when I was Secretary of State or since. https://t.co/BTOdFE1khW

​Just last week, the Syrian Foreign Ministry called on the United Nations and the UN Security Council to condemn Israeli strikes close to Damascus, "as well as the ongoing coordinated and planned hostilities against the sovereignty of Syria by the three occupiers: the United States, Israel and Turkey."

Israeli prefers neither to confirm or deny the attacks, but in rare comments, it does acknowledge its military is striking alleged Iranian targets within Syria. In mid-December, IDF Chief of Staff Lt.-Gen. Aviv Kochavi said that Israel has conducted numerous operations in Syria targeting what the Israeli military claims are Iranian-backed groups allegedly located in the Arab Republic.