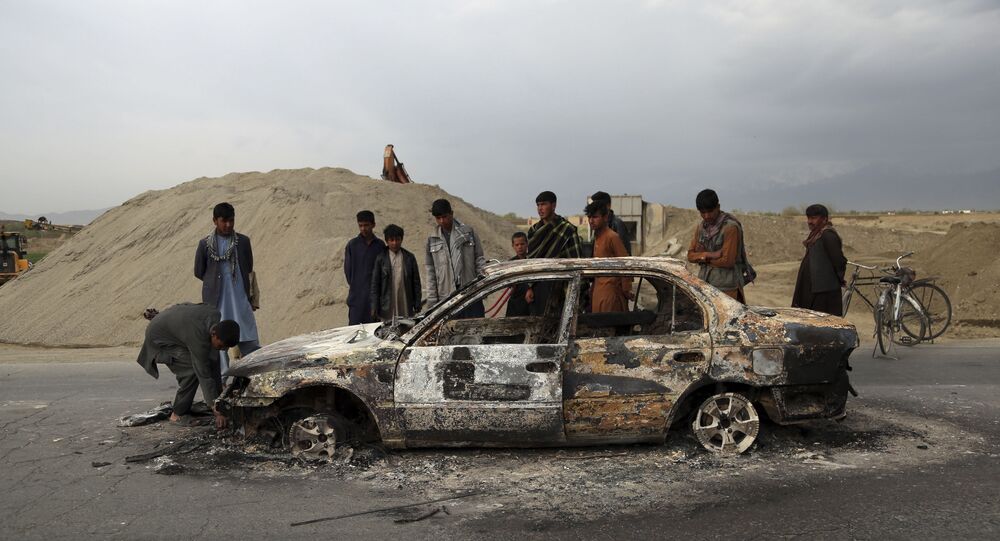 President Biden unilaterally extended the withdrawal period of the 2020 US-Taliban peace deal, announcing last week that the pullout of US forces would start in May and be completed by September. The Islamist militia has ominously warned that “problems” would “be compounded” if US and NATO troops did not pull out by the previously agreed deadline.

US Central Command chief Gen. Kenneth McKenzie expressed concerns on Thursday that the Afghan military has become highly dependent on American assistance, and that a pullout of US troops could endanger the former's ability to continue holding their territories or even cause the government to collapse.

“My concern is the ability of the Afghan military to hold the ground that they’re on now without the support that they’ve been used to for so many years,” McKenzie, the effective head of US forces in the Middle East, said, speaking before members of the Senate Armed Services Committee in Washington, DC.

The general warned that “if we don’t provide [the Afghan government] with some support, they certainly will collapse, and I think that’s not in our best interest.”

At the same time, McKenzie said he “strongly” supported Biden’s decision to withdraw, and suggested that “we should have learned by now that a conditions-based withdrawal is just a recipe for staying in Afghanistan forever.” He added, however, that he continues to believe that the invasion of Afghanistan was a “good cause” and that the almost 20 year conflict has helped to prevent attacks against the United States.

The general estimated that the Taliban has about 50,000 fighters and controls more of the country today than they did a decade ago, and pointed to unspecified “offshore havens” where the militia is “able to reconstitute, where the government of Afghanistan can’t reach.”

He also dismissed the characterisation of the conflict in Afghanistan as a “civil war,” instead characterising it as an “insurgency.”

The commander added that the US would continue to provide overhead intelligence and surveillance following withdrawal, but indicated that it would take drones “significantly” longer than four hours to reach targets in Afghanistan. He further said that keeping tabs on al-Qaeda or Daesh (ISIS) operations in Afghanistan would be “difficult,” but “not impossible” once US troops are gone.

© AP Photo / Massoud Hossaini
Germany Reportedly Plans to Speed Up Withdrawal from Afghanistan, Complete Pullout by Early July
McKenzie’s comments on Thursday follow remarks he made before the House Armed Services Committee on Tuesday in which he expressed “grave doubts” about the Taliban’s “reliability,” and promised that the US would position “significant combat power to guard against the possibility” of Taliban attacks during the withdrawal process. During Tuesday’s testimony, he also accused Russia and China, two countries President Biden asked to help Afghanistan once the US was gone, of seeking to “expand their efforts to improve their position in the region and diminish US standing.”

On Wednesday, an unnamed US official told Reuters that commanders were seeking Pentagon approval for the deployment of an aircraft carrier near Afghanistan to protect troops during the withdrawal. Defence Secretary Lloyd Austin is expected to make a decision on the matter in the coming days, the official said. CENTCOM declined to comment.

The US/NATO war in Afghanistan has raged since late 2001, with US forces invading the country in the aftermath of the 9/11 terror attacks on New York City, Washington, DC and Pennsylvania. The Bush administration fingered Saudi-born multimillionaire and al-Qaeda leader Osama bin Laden for the attacks, and demanded that the Taliban hand him over. The Islamist militia refused to do so unless the US provided specific proof of bin Laden’s involvement in 9/11, prompting the US to invade. US forces were soon joined by those of other NATO countries, and the alliance has gone on to spend nearly two decades engaged in counterinsurgency operations in the war-torn nation. The war has claimed the lives of over 65,000 Afghan security forces personnel, 38,000 civilian lives, 3,500+ coalition troops, 4,000 Western mercenaries, and between 67,000 and 72,000 Taliban fighters. It has also displaced millions of people, both inside and outside the country, and led to a major spike in opium production.