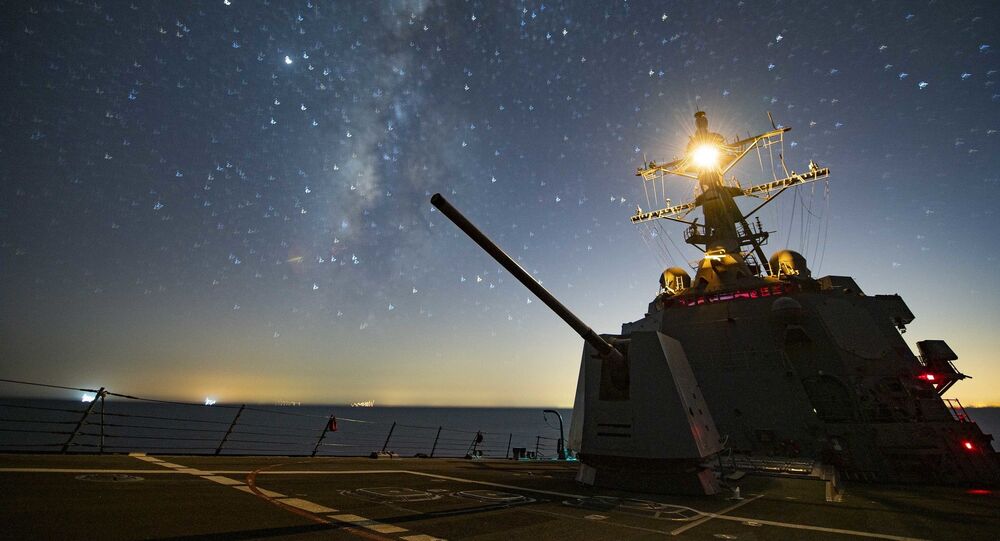 Overflights of sensitive US installations by unidentified unmanned aerial vehicles have become increasingly common over the past decade. However, previous reporting on the matter has been largely limited to swarms of drones hovering over nuclear power plants and other critical energy infrastructure.

The US Navy does not know or is not willing to reveal who was responsible for the July 2019 nighttime flights over Navy destroyers near a sensitive military training range in California’s Channel Islands.

Asked to comment on the incident at a defence journalists event in Washington, DC on Monday, Admiral Michael Gilday, chief of naval operations, said he could not positively identify the aircraft.

“No, we have not [been able to identify them]. I am aware of those sightings and as it’s been reported there have been other sightings by aviators in the air and by other ships not only of the United States, but other nations –and of course other elements within the US joint force,” the commander said, his comments relayed by NBC News.

Gilday confirmed that the findings were “still…being analysed” and that he has nothing new to report. “But I will tell you we do have a well-established process in place across the joint force to collect that data and to get it to a separate repository for analysis.”

The officer also dismissed speculation that the craft could have been “extraterrestrial,” saying he couldn’t “speak to that,” and that he has “no indications at all of that.”

The admiral’s comments follow reporting late last month based on information obtained using Freedom of Information Act requests, which revealed that as many as six unidentified craft at a time chased after and manoeuvred around Navy destroyers off the California coast near Los Angeles in July 2019. The string of incidents sparked investigations by the Navy, the Coast Guard, and the FBI, and was deemed serious enough to be sent up the chain of command to the desk of Gilday’s predecessor, Admiral John Richardson.

The warships present in the area during the drone assaults included the USS Kidd, USS Rafael Peralta, USS Russell, USS John Finn, and USS Paul Hamilton, all Arleigh Burke-class destroyers, with a detailed investigation by The Drive indicating, based on ship logs, that the incidents took place between the night of 14 July and 15 July, with further encounters possibly taking place after that.

In its report on the matter, the outlet was troubled by the fact that the drones could lock onto and catch up with destroyers traveling at high speeds and through poor visibility, and stressed that “if the drones were not operated by the American military, these incidents represent a highly significant security breach.”

The outlet added that “if they were part of some kind of covert action, it is nonetheless unclear why they were flown so openly and so frequently in almost a harassing manner. More troubling still, if a foreign state actor was involved, where exactly were the drones launched from?”

The Pentagon is expected to brief Congress on “Unidentified Aerial Phenomena” later this year.

© CC0
Federal Docs Detail Dozens of Drone Sightings at Several US Nuclear Power Plants
Reports on the July 2019 incidents follow a plethora of earlier reports on occurrences taking place between 2014 and 2019 on the use of drones to spy on some two dozen US nuclear power facilities. In one incident taking place during nighttime on 29 and 30 September 2019, between four and six unmarked drones flew over the Palo Verde Generation Station in Arizona – America’s largest nuclear power plant, with plant security proving unable to stop them and authorities baffled as to who was operating them or why.

Only a handful of countries in the world have major drone capabilities, among them the United States with its Predator and Reaper series of spy and strike UAVs, Israel, Turkey, Iran, and China. Drone warfare has become a major element of modern military operations, with Yemen’s Houthi militia temporarily knocking out half of Saudi Arabia’s oil output in September 2019 via two mass drone attacks, and the US carrying out assassination strikes using drones in the Middle East for nearly two decades. Turkish and Israeli drones used by Azerbaijan during last year’s war in Nagorno-Karabakh are thought to have given the Azerbaijani side its edge over the breakaway’s Armenian defenders.

Video: Houthi Missile Shoots Down What They Claim Was ‘American MQ-9’ Drone Over Mar'ib