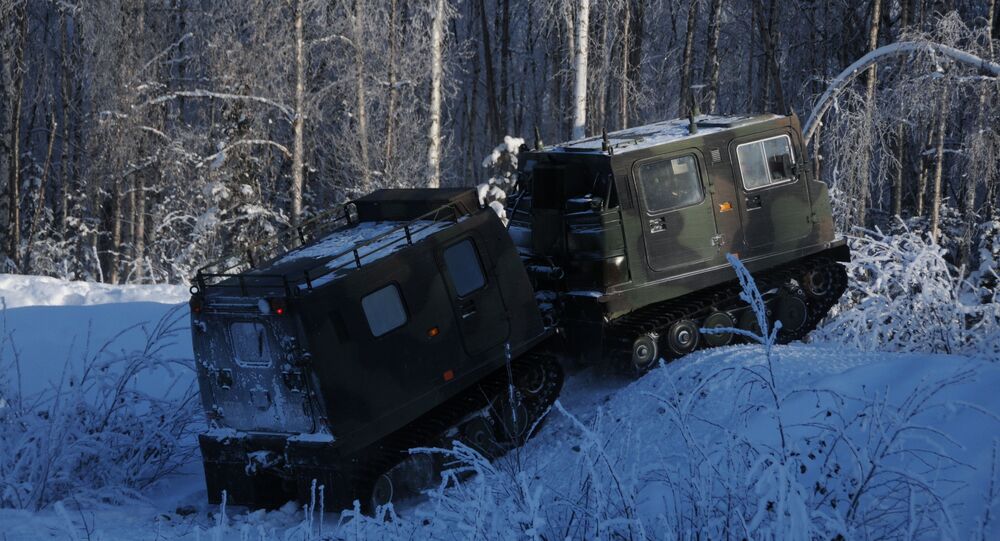 Arctic sea routes are expected to become ice-free by the 2040s and many world powers are looking to the northerly sea route for trade, fishing, and oil drilling - but weighing the military concerns that come along with such competition.

The US Army is looking to replace its aging tracked snow vehicle, tapping two defense firms to build prototypes for the service. As the world braces for the consequences of an increasingly warming climate, the Pentagon has been looking toward the Arctic as a new theater in which to expand its patrols.

Oshkosh Defense announced Monday it had been selected by the National Advanced Mobility Consortium, a US government partner, to jointly develop a prototype vehicle to the Cold Weather All-Terrain Vehicle (CATV) competition with ST Engineering. The other firm competing against Oshkosh is BAE Systems, Tim Goddette, head of the Army’s Combat Support & Combat Service Support program, told Defense News.

Since the 1980s, the US military has relied on Swedish firm Hägglunds’ Bandvagn 206 tracked articulated snowcrawler to navigate the colder parts of the globe, dubbing it the Small Unit Support Vehicle (SUSV). Although light enough to be airlifted and adaptive enough to be fitted out for a variety of different missions ranging from transport to anti-tank warfare, the SUSVs are out of production and have become increasingly hard to maintain - a problem plaguing other legacy Pentagon equipment, too.

ST Engineering’s Bronco 3 all-terrain tracked carrier, an articulated vehicle similar to the SUSV that’s presently used by Singapore and Thailand and formerly by the British Army, is to be modified for the competition. The Bronco 3 previously completed Arctic testing in 2019, although the Army’s demands exceed its previous uses.

“The new vehicle design will be built with the combined expertise of Oshkosh Defense and draws on the rich heritage of the Bronco family of vehicles, a proven, robust and versatile articulated platform which has been in operation since 2001,” Lee Shiang Long, the chief of Land Systems at ST Engineering, said in the Monday release. The document notes they will deliver two models to the Army: one a General Purpose model that can be used for troop transport or casualty evacuation, and another Cargo model, although it notes the vehicle could also be used in a Command & Control configuration.

BAE has yet to issue its own press release on the contract, but since the company now owns Hägglunds, it stands to reason its Bandvagn S10 “Beowulf” all terrain armoured vehicle, tracked and articulated like the Bandvagn 206 but considerably larger and newer, will serve as the basis for its entry.

According to Defense News, the prototypes must be delivered to the Army by June 14, at which point they will be sent to the Cold Regions Test Center at Fort Greely in central Alaska for testing until December. The prototypes will be judged based on payload, mobility, crush resistance, transportability, and how well they cope with amphibious demands, with the Army making the final decision by June 2022.

The Earth’s polar regions have been getting increased attention from many nations as the warming global climate threatens to leave vast parts of the Arctic Ocean ice-free. Russia, which has more miles of coastline in the region than any other nation, has emphasized the potential of the Northern Sea Route, and China has explored fishing in the region and the opening of a “Polar Silk Road” as part of the Belt and Road infrastructure megaproject.

The US, too, has looked at expanding offshore petroleum drilling in the Arctic Ocean, but also placed a major focus on military operations in the region, including weighing conducting “freedom of navigation operations” (FONOPS) against Russian maritime claims, like those it presently performs in the South China Sea against Chinese and Vietnamese claims.

However, US policy thinkers have criticized the Pentagon’s disjointed Arctic policy, with the hawkish Center for Strategic and International Studies think tank claiming last May that US Arctic strategy has “no coherence to it,” apart from reacting to other nations’ moves.

Last year was the first time in 40 years a US Navy warship entered the Barents Sea, north of Scandinavia, and the Navy has looked at renewing rights to installations in the region. In January, the Pentagon said it intended to soon test the AGM-179A Joint Air-to-Ground Missile (JAGM), which was likely used to assassinate Iranian Maj. Gen. Qasem Soleimani outside Baghdad last year, in Arctic conditions.