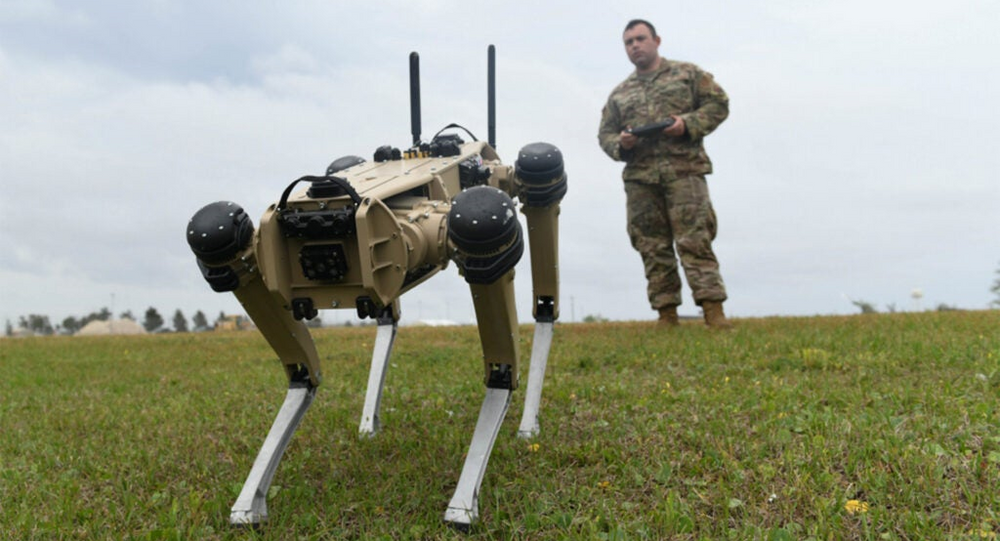 Fears that bipedal and quadrupedal robots will one day be militarized and turned into unstoppable killing machines have been around for years, and even explored in the British dystopian science fiction series Black Mirror. Last week, these fears appear to have come one big step closer to reality.

Like their famous civilian cousins, the robot dogs are said to be capable of nimbly navigating ground terrain, scaling heights, crouching, creeping and running.

Multiple cameras and sensors are attached to the robots, including a 360-degree picture of the battlefield environment, microphones and a radio allowing them to communicate with anyone or anything they happen to encounter.

They can be driven via a virtual reality headset, or programmed to travel along a prearranged patrol route while being monitored by an officer.

© AP Photo / Todd Pitman
US Army Gives Priority to Battlefield Robots, Especially for Fighting China, General Says
Shackley said Q-UGVs will be tasked with patrolling remote areas of the base, freeing human security forces to “patrol and monitor other critical areas of an installation.”

The Q-UGVs are said to be able to operate in extreme weather conditions ranging from -40 to +131 degrees Fahrenheit, and according to Task & Purpose, can be equipped with “other sensors and equipment to help on special missions, like explosive ordinance disposal.” The military did not specify whether future options might include attaching mobile machine gun turrets, minelayers or other deadly equipment to the robots and sending them to Third World counties for counterinsurgency operations.

The robo dogs were delivered on 22 March. Tyndal AFB announced that the base would be the first Pentagon installation to make use of semi-autonomous robots back in November.