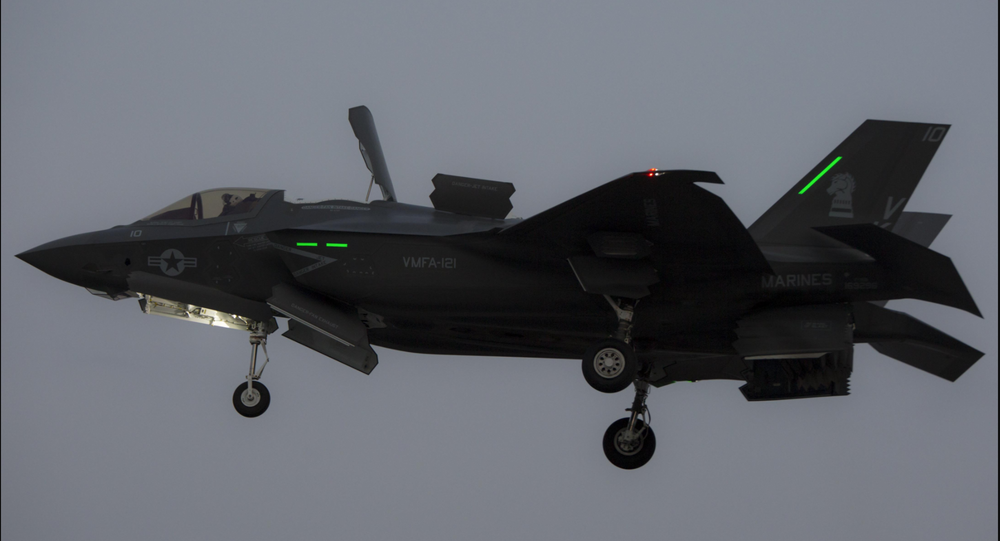 The ever-troublesome F-35 Lightning II single-engine aircraft is fitted with a GAU-22 Gatling gun, which is installed in an external jet cannon under the plane’s fuselage. However, unlike the F-35A, both the F-35B and the F-35C carry the firearm externally.

The underbelly of a US Marine Corps F-35 Joint Strike Fighter recently underwent severe damage after a munition from the aircraft’s Gatling gun suddenly exploded shortly after being deployed from its cannon.

The incident occurred on March 12 over the Yuma Range Complex in Arizona while officials were carrying out a nighttime close air support training session, Andrew Wood, a spokesperson for the Marine Corps, confirmed to Military.com on Tuesday.

"The mishap did not result in any injury to personnel, and an investigation of the incident is currently taking place," Wood told the outlet, noting that the aircraft functions under the service’s Yuma-based test and evaluation squadron.

Despite the mishap, the pilot of the F-35B was able to safely bring the aircraft back to its home base. Military.com identified the specified munition as a PGU-32/U Semi-Armor Piercing High Explosive Incendiary-Tracer.

The mid-March incident has been labeled a Class A mishap, the most severe level on the US military’s categorization for such events. According to the Naval Safety Center, the given classification would indicate that the explosion caused at least $2.5 million in property damages, or that personnel aboard was permanently disabled.

It remains unclear whether the munition was purposely deployed during the session, as Woods did not provide further insight on account of the ongoing investigation by the service.