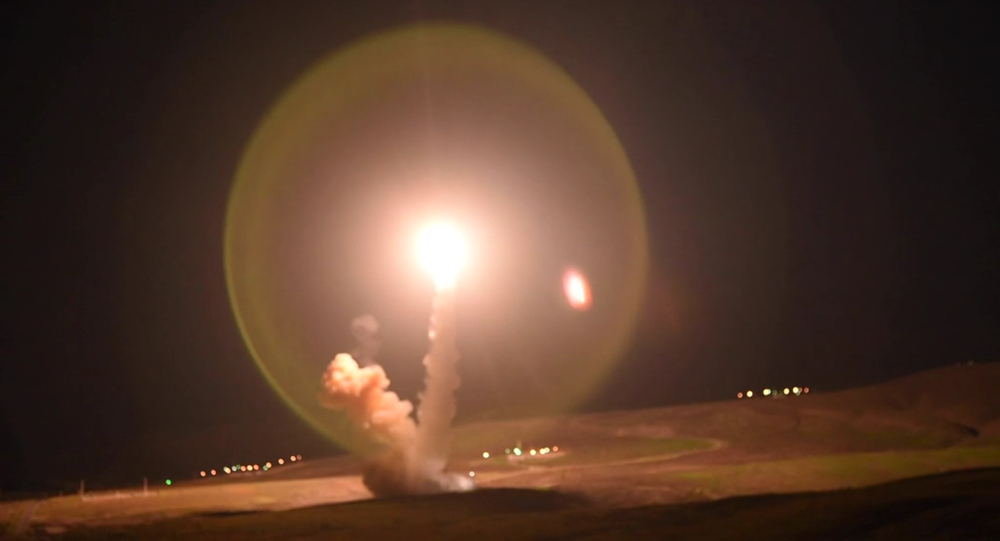 The US has decried Iran’s ballistic missiles and its alleged attempts to build a nuclear weapon, although the US maintains thousands of such weapons and is the only country in the world to have ever used them in warfare.

The US carried out its latest test of the Minuteman III intercontinental ballistic missile (ICBM) on Tuesday night, launching one of the nuclear-capable rockets from the California coast to a missile range in Kwajalein Atoll in the Marshall Islands, 4,200 miles away.

“The test demonstrates that the United States’ nuclear deterrent is safe, secure, reliable and effective to deter twenty-first century threats and reassure our allies,” the Air Force said in a press release. “These test launches verify the accuracy and reliability of the ICBM weapon system, providing valuable data to ensure a continued safe, secure and effective nuclear deterrent.”

The missiles are typically armed with either a single 450-kiloton W87 nuclear warhead or three 350-kiloton W78 warheads, each of which can strike separate targets. However, missiles are unarmed when test-fired.

Tuesday’s test is the first since the Biden administration renewed the New Strategic Arms Reduction Treaty (New START) with Russia, which places limits on the size of each nation’s nuclear arsenal.

Under the administration of former US President Donald Trump, the Pentagon began or expanded several costly programs for modernizing its nuclear arsenal, including a new ballistic missile submarine, new stealth bomber, new ICBM, new nuclear cruise missile, and new nuclear warheads, as well as overhauls of existing warheads. The Biden administration, which began in late January, is expected to comprehensively review these programs, and has been encouraged by defense policy thinkers to commission a new nuclear posture review like that issued by Trump in early 2018.

However, the Minuteman IIIs are more than 50 years old and will require replacement eventually. The Ground-Based Strategic Deterrent (GBSD), the proposed replacement system, is expected to cost $264 billion over the next decade by itself, not including any new warheads, although some of the W87s are expected to be adapted to the new missile. Last year, the Pentagon gave Northrop Grumman a $13.3 billion contract to design the new rocket.

The US has about 450 Minuteman IIIs in silos scattered across several “missile farms” in the Great Plains, and about 3,800 active nuclear warheads, with another 2,000 in reserve, as of June 2020.