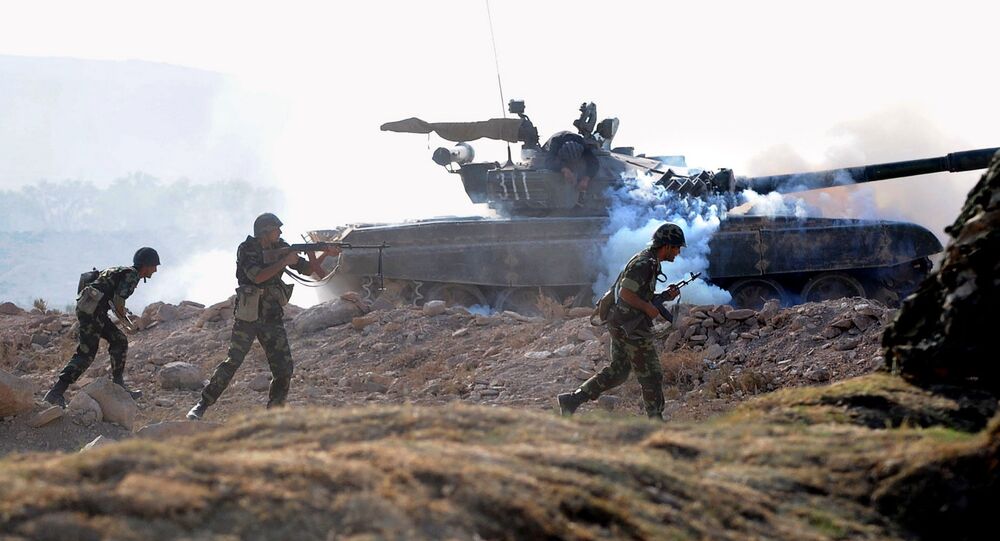 Armenia Not Ruling Out Joint Arms Production With Russia

"Why not? To begin with, Armenian-Russian joint ventures are already functioning in Armenia, and further work in this direction is underway", he said, answering a question about joint arms production.

Harutyunyan added that his country will be also working on the "creation and expansion of the network of regional certified centres for the maintenance and modernisation of weapons and military equipment".

According to the minister, Yerevan is also interested in expanding the 102nd military base of the Russian Armed Forces' Southern Military District in the eastern Armenian city of Gyumri.

© Sputnik / Evgeny Biyatov
Kalashnikov mount displayed at the Russian Defense Ministry's Innovation Day 2015 exhibition, on the premises of the congress and exhibition center of the Russian armed forces in Kubinka, Moscow Region.

"The issue of expanding and strengthening the Russian military base on the territory of the Republic of Armenia has also been on the agenda. And the Armenian side has always been interested in this for a simple reason that the base is included at full strength in the United Group of Forces of the Armenian and Russian armed forces. And, therefore, the expansion of the base's capabilities automatically leads to the increase of the joint group's potential", he said.

Harutyunyan stressed that Moscow took into account the recent developments in the region and made the right decisions regarding the expansion of the base's capability, adding that there was no need to establish a second Russian military base in the country. However, the minister added that Russia and Armenia considered the relocation of some units from the Russian base further to the east of Armenia.

Modernisation of the Army

Harutyunyan also noted that Armenia is reequipping the armed forces and optimising their size in a reform launched after the Nagorno-Karabakh conflict.

"Military reform in Armenia is not only being planned but is already underway, and our Russian colleagues are directly involved in this process", Harutyunyan said.

According to the minister, the current military-political situation in the South Caucasus makes the ongoing reform of the national armed forces an irreversible and indisputable priority.

"Certainly, taking into account the combat experience and the events in Karabakh, we will cardinally revise issues related to optimisation of the fighting and numerical strength … primarily through increasing the combat component; selective reequipment with new systems of armaments and military hardware in priority areas; retention of human capacity; and better staffing levels when it comes to officers, civil servants and contractors", he noted.

The decades-long frozen conflict between Armenia and Azerbaijan in the self-proclaimed Nagorno-Karabakh Republic escalated in September 2020, resulting in military and civilian casualties on both sides. The hostilities ended after the sides agreed to a Russian-brokered ceasefire on 9 November. The deal stipulated that some of the territories controlled by the self-proclaimed Nagorno-Karabakh Republic be handed over to Baku, while Russian peacekeepers were deployed to the region.