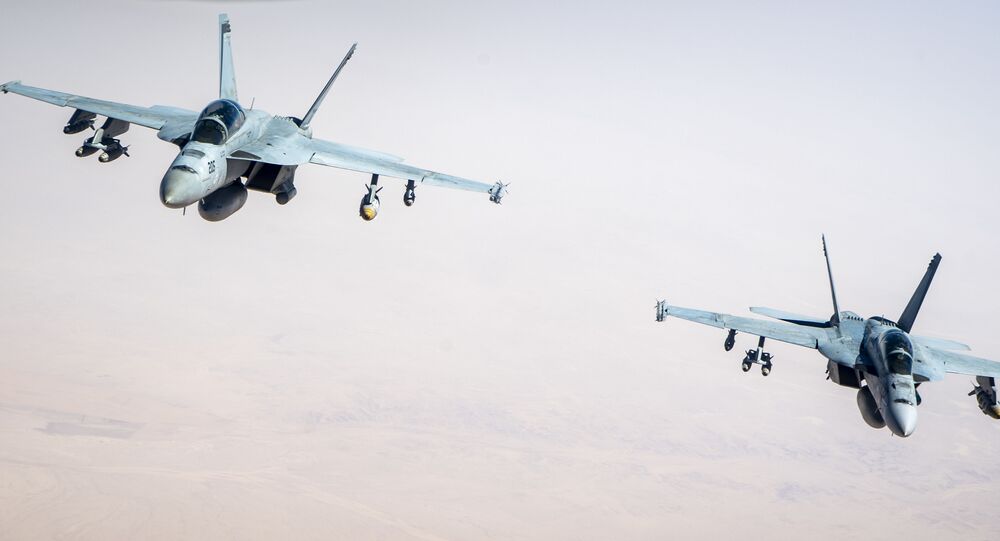 The Russian and US militaries set up an air ‘deconfliction mechanism’ over Syria in the fall of 2015 to reduce tensions and rule out accidental aerial incidents and escalations. Since then, the two countries have largely managed to avoid clashes involving Russian and American forces. But there have been exceptions.

A US F/A-18E Super Hornet monitoring a Russian Su-35 fighter jet suffered a failure of its Forward Looking Infrared (FLIR) camera during a mission over Syria in 2017, the RAND Corporation, a California-based think tank doing research for the US military, has revealed in a report.

According to think tank, the sensor breakdown took place on 18 June 2017, when US fighters assigned to carry out a close air support (CAS) mission to assist US-backed Syrian Democratic Forces (SDF) troops on the ground in northeast Syria got into a dogfight with a Syrian Su-22 fighter-bomber as it approached SDF positions.

“Even before the Syrian Su-22 Fitter arrived on scene, there was reason for the Navy pilots to consider potential air-to-air contingencies. First, Syrian regime ground forces were operating in proximity to the SDF, so just as coalition aircraft were overhead to provide support to their local partners, it was possible Syrian aircraft would be doing the same in support of pro-regime forces. In addition, a Russian Su-35 Flanker fighter aircraft arrived overhead and began circling the CAS stack,” the report indicated.

“The Russian jet was monitored by one of the F/A-18E Super Hornet pilots, who was having issues with his Forward Looking Infrared (FLIR) sensor, which was critical for air-to-ground targeting. To make use of the Super Hornet’s other capabilities, the pilot switched to air-to-air master mode, tracking the Russian fighter, while the remaining three F/A-18 Hornets focused on the air-to-ground mission. It is worth highlighting that the sensor malfunction was just one of several issues encountered on the mission, but the pilots continued to adapt to meet the mission objectives,” it added.

The report does not elaborate on what these other “issues” were, but does admit  that the US aircraft “quickly exited Syrian airspace” amid fears that Syria may activate its air defences in retaliation to the shootdown of the Su-22.

The destruction of the Su-22, the first US shootdown of a manned foreign aircraft since 1999, led to a sharp escalation in tensions between Russia and the US, with Moscow declaring the entire western half of Syria a no-fly zone for US aircraft and temporarily suspending its deconfliction hotline with the US-led coalition.

Fortunately, the pilot of the downed Su-22, Captain Ali Fahd, ejected from his aircraft and was rescued one day after the incident. Damascus blasted Washington over the act of aggression, and said the jet was attacked by US planes while targeting Daesh (ISIS)* terrorists.

The US Air Force awarded the F/A-18E pilot who fired the missile that shot down the Syrian plane with a Distinguished Flying Cross medal.

While the Russia-US deconfliction mechanism in Syria has managed to hold successfully for over five years now, things have not been entirely without incident.

Last year, multiple US troops received minor injuries after American and Russian vehicles attempted to outrun each other on a wheat field in Syria’s Hasakah province, with the Pentagon claiming a Russian vehicle “sideswiped” a US truck and that a Russian helicopter had carried out an “extremely low level overflight” over US forces. Throughout last summer, Russian forces engaged in cat and mouse chases with US forces in Syria’s northeast, asking US forces directly on what basis they were present in the Syrian Arab Republic, despite a lack of an invitation from the internationally-recognized Damascus government.

Russian & American troops clashing into each other in #MadMax style drive through #Syria. US soldiers sustained injuries. pic.twitter.com/GzbKa7QJHM

Confrontation in Syria: the Russian army ousted the US military and they sent combat helicopters pic.twitter.com/B01bZ6nYZB

In late 2019, then-US President Donald Trump candidly admitted that US forces in Syria were assigned to “take the oil.” Russian intelligence estimates that the US military, the CIA, private military contractors and the SDF earn over $30 million a month smuggling stolen Syrian oil.