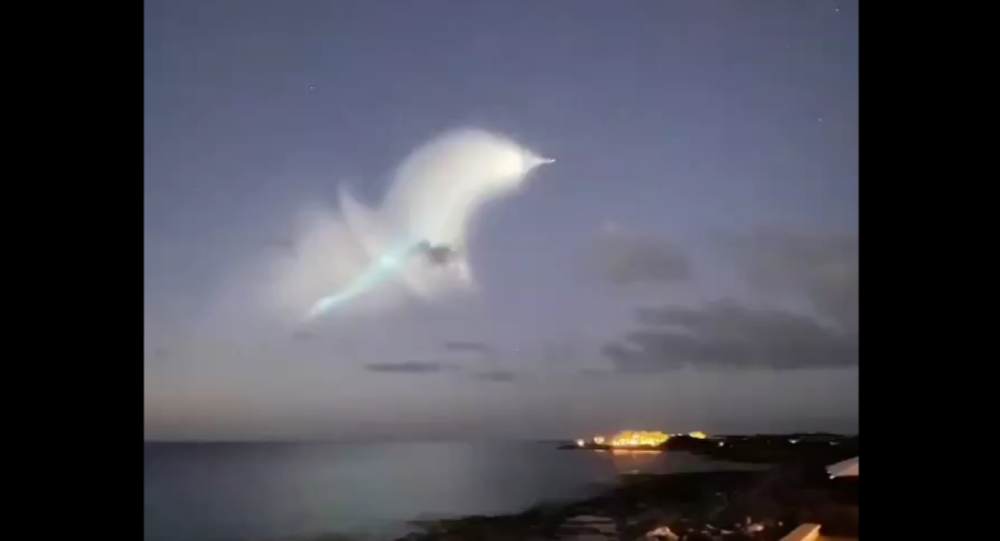 Both the US and UK use the Trident II missile, but London’s last test, in 2016, was a disaster that fanned the flames of nuclear disarmament in the UK. The Pentagon said in 2020 that it hoped to extend the missile’s life for another 60 years.

Observers on Tuesday spotted a missile flight off the coast of Florida, which online researchers verified was a three-stage ballistic missile fired from a submarine, making it most likely a Trident II SLBM. No military entity has so far claimed responsibility for the launch.

When the exhaust plume from the ballistic missile was spotted shining in a bright white arc across the skies over Florida on Tuesday, some feared aliens were among us. Instead, the spectacle was identified as a ballistic missile test. According to West Palm Beach’s WPTV, the plume was visible as far away as the Turks and Caicos Islands.

Yesterday @SurfnWeatherman captured a great video of a Trident II sub missile test off Florida’s east coast. The timing & position of the launch provided a fantastic visualization of the highly under-expanded exhaust plume at altitudepic.twitter.com/uX7JgmVSc6

​Dutch researcher Marco Langbroek tweeted that wide swaths of the Atlantic Ocean between the Florida coast and the sea east of Ascension Island were closed to marine traffic on Tuesday, indicating the 8,400 kilometre flight path of a rocket with three stages that would also splash down in the sea.

Looks like a potential #Trident-II #SLBM test is upcoming in the Atlantic between Feb 9 and 14.

​The flight path, he noted, very closely mirrors the planned path of a 2016 test of the Trident II by the British Royal Navy, which ended in disaster when the missile went in the opposite direction, arcing toward the US mainland before its self-destruct mechanism was engaged. The missile was unarmed and London has not tested a Trident II since. There has been no indication of a similar fate for Tuesday’s test.

The US Navy uses the nuclear-capable missile in its own submarines and has test-fired them in the Pacific as recently as February 2020. While ballistic missile tests are far more common in the larger ocean, some are still tested over the Atlantic, such as the test of a French M51 SLBM in June 2020, which flew from off France’s west coast toward the Sargasso Sea.

The Trident II has served as the basis of the US and UK’s nuclear second-strike capability since 1990. Designed with a huge warhead capacity of up to 14 W76-2 devices, in practice it is only ever loaded with a maximum of four warheads, due to the constraints of the New Strategic Arms Reduction Treaty (New START), which Russia and the US agreed to extend just days ago.

In March 2020, the US Navy announced a life extension program for its Trident II D5 missiles, intending to allow them to be used until 2084.

“We need to make sure the Trident is always rock solid, because we will need to keep it for the next 60 years,” Vice Adm. Johnny Wolfe, Director of the US Navy’s Strategic Systems Program, told The Mitchell Institute of Aerospace Studies last month.

“We have the most reliable weapons systems that anyone has ever built. There have been 178 successful launches. We took that reliability and if the 16 missile tubes stay the same, we can meet the mission,” Wolfe said.

In the UK, the failure of the 2016 test put wind into the sails of those wishing to scrap the country’s nuclear weapons program, and the Scottish National Party has considered adding nuclear disarmament to its platform as recently as 2019. In February 2020, the defense ministry announced the development of a new nuclear warhead for the Trident II.